Mourinho like McGregor? Roma boss can still annoy rivals, but Juventus return will show if he can still beat them 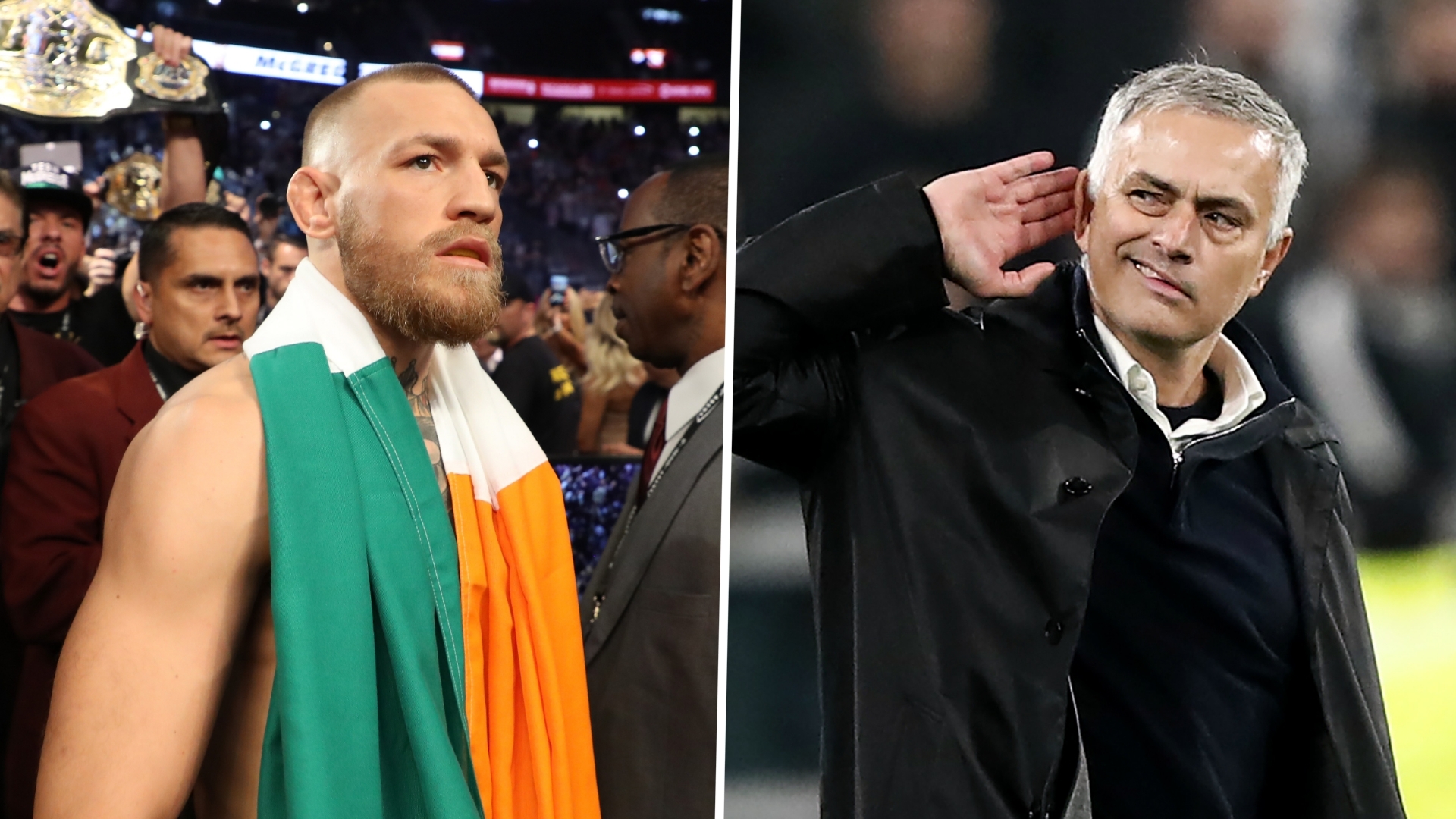 After a tough time at Tottenham, the Portuguese has made a promising start to his time at Stadio Olimpico, but he has yet to record a statement win

Jose Mourinho was one of the invitees.

"It was a real pleasure to meet him, to share some stories and to offer him the most beautiful shirt in town," the Portuguese wrote in an Instagram post accompanied by three pictures, one of which showed Mourinho presenting McGregor with a Roma jersey.

Both men referred to the other as a "legend", which they undoubtedly are in their respective fields, and their mutual admiration probably stems from the fact that they have many other things in common.

After all, both are considered controversial characters, masters of mind games and media manipulation, often accused of going too far in their attempts to wind up rivals.

It feels fitting, then, that this meeting took place just two days before Mourinho returns to one of the scenes of his most notorious gestures.

On the night of November 7, 2018, Mourinho was in Turin with his Manchester United side for a Champions League group-stage clash with Juventus.

The home side dominated the game almost from start to finish and were on course to claim a deserved 1-0 victory thanks to a goal from Cristiano Ronaldo when they sensational conceded twice in the final four minutes.

Having been booed, whistled and allegedly insulted by Juve fans throughout, former Inter coach Mourinho responded in typically provocative fashion by going on to the pitch at full-time and cupping his right hand around his right ear.

Both Juventus fans and players reacted with predictable fury, with Leonardo Bonucci, whose own goal had decided the game in United's favour, particularly incensed.

Mourinho expressed a semblance of regret, but felt it had been the fans who had initially overstepped the mark.

"I was insulted for 90 minutes, I came here to do my job, nothing more,” Mourinho told Sky Sport Italia. "I didn’t offend anyone in the end. I just made a gesture that I wanted to hear them louder.

Mourinho and Juve had plenty of previous. During his time in charge of Inter, he had regularly claimed that the Bianconeri benefited from biased officiating. He once quipped, "There's only one 25-metre penalty area in Italy..."

So, his first match back at the Juventus Stadium since 2018 has been eagerly awaited since the Serie A fixture list was published back in August.

They certainly have not forgotten about the cupped-ear celebration in Turin. Juve coach Massimiliano Allegri even addressed it in his pre-match press conference on Saturday.

"Mourinho is a coach who has won a lot and I respect him a lot,” the Tuscan told reporters. "It’s in his character to, every now and then, do like he did with Manchester a few years ago.

"Moreover, that gesture of the ears with Manchester United he did it at the end of Juventus’ most beautiful games. In the end, nobody remembers it because we lost.

"But it pleases me to have a coach of his value back in Italy."

Whether that is true is open to debate, given Allegri labelled Mourinho "pathetic" during his time in charge of AC Milan, telling Le Iene: "He continuously repeats the same things and it becomes banal. I think he is very talented but his arrogance hides insecurity."

Still, there is no denying that Mourinho's return has been a boost for Serie A, and he is already making memories at Stadio Olimpico.

When Roma beat Sassuolo with an injury-time winner on matchday three, Mourinho set off towards the Curva Sud, roaring and shouting, with one fist triumphantly raised in the air.

Unsurprisingly, comparisons were immediately drawn with his famous touchline run at Old Trafford all the way back in 2004, when his Porto side knocked United out of the Champions League.

Of course, Mourinho has an awful long way to go at Roma to match his past glories, but there are signs that his stay in the capital could last longer than his Tottenham tenure.

Lorenzo Pellegrini, who has been in sensational form, recently revealed that there is an atmosphere at Roma this season that he has never experienced before, and he puts that down to Mourinho, who is said to have found the right balance between passion and tranquillity.

"It does feel different this year," Pellegrini told DAZN last month. "We are told to take it one game at a time, and this time it really is the approach we take.

"We will never speak about the next match, no matter how important it is, until this one has been played."

Roma remain a work in progress, of course. They have played just nine games under Mourinho in all competitions, but they have won seven of them, and presently sit fourth in Serie A, four points above seventh-placed Juve.

Getting the Giallorossi back in the Champions League would be incredible achievement, though, given Mourinho does not have the same resources at his disposal as Italy's top teams, including Sunday's opponents.

As former Inter charge Dejan Stankovic told TMW earlier this week, "I already see Mourinho’s character in Roma's play but, for his type of football, they still need something in terms of signings. The Friedkins (the club's American owners) must complete the squad."

It will certainly be interesting to see if moves are made in the January transfer window, after Mourinho has had more time to evaluate his squad.

The jury is still out on this Roma squad right now. The fixture list has been kind to them and yet they have still lost twice, most surprisingly at Verona, but most tellingly against Lazio.

Sunday, then, represents a significant challenge for Roma and their coach.

Mourinho's mere presence in Turin will generate headlines. We know that he has not lost his ability to antagonise rivals, just like McGregor – but are they still capable of beating them?

How Roma perform against Juventus will tell us far more about whether 'The Special One' could yet add to his legendary status than anything he says or does before, during or after the game.