The Gunners secured a massive 2-0 win over United on Friday night, showing all of their experience and character to secure a huge three points

Arsenal manager Joe Montemurro has regularly talked about how big games are won in ‘moments’. On Friday night, there was one moment where it looked like Manchester United could have gone on to beat the Gunners.

Beth Mead was already on a yellow card when she lunged in needlessly to tackle Lucy Staniforth. It was the middle of the pitch, with no promising attack to stop. Furthermore, her side were 2-0 up, with half an hour to play.

Mead knew the mistake she’d made immediately. She raised her hands in apology, but she knew what was coming. Arsenal had not won a game against any of the top three all season and, with 10 players, now they had to see out this result that could change their season. In the end, they did it.

The Gunners are now, with a game in hand and a massively superior goal difference, just three points behind Man Utd in the final Women’s Champions League spot.

“Players had to do things that they didn't enjoy doing and they did it for the group. I think that's where the character of this group comes out. That's what I'm proud of.”

In past weeks, maybe this result wouldn’t have happened. Arsenal struggled to see out the game away at Manchester City earlier this season, losing a point in the final minute as City scored a late winner. At home to Chelsea, they conceded a stoppage-time equaliser.

It’s results like those that will have no doubt been in the back of the minds of the Arsenal fans when Mead left the pitch.

But that is where the return of some key players proved crucial, particularly Kim Little. Had Arsenal had fewer injuries this season, with the quality of their squad, they probably wouldn’t be in this position. That certainly includes Little.

Their captain was back for her first start since January on Friday night and she put on an exemplary performance that led the way when it came to Arsenal managing this game. 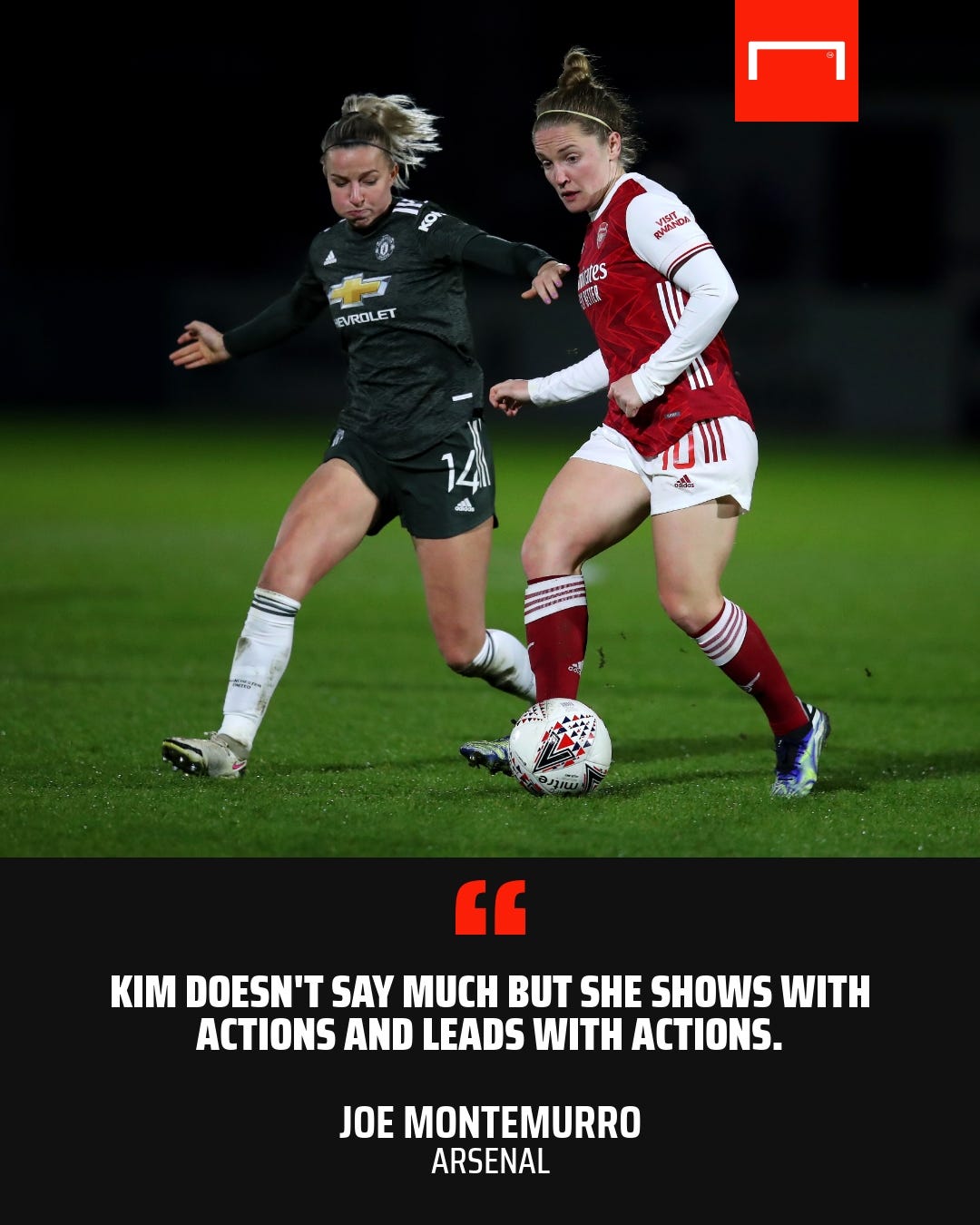 Added to that experience was the sheer passion and whole-heartedness of Lotte Wubben-Moy’s display at centre-back. The childhood Gunners fan was described as “true Arsenal” by her manager after the game and her performance showed as much. In the absence of Leah Williamson, another defender who grew up supporting the club, that was huge.

United will be very disappointed with the result, that a word head coach Casey Stoney used a lot after the game. They created lots of chances in the first half especially, dominated possession and should have scored a number of goals.

"They were clinical in their chances. We weren't in ours,” Stoney said, a succinct but spot-on summary.

“We've not got a lot of experience in our team and I think that showed potentially early on. After the [first] goal, I thought we settled into the game really well and actually had really dominant spells. But unless you put it in the net, you don't give yourself a chance of winning.”

The most disappointing thing will be that, despite topping the Women’s Super League table at Christmas, the race for that final Champions League spot is now out of United’s hands. 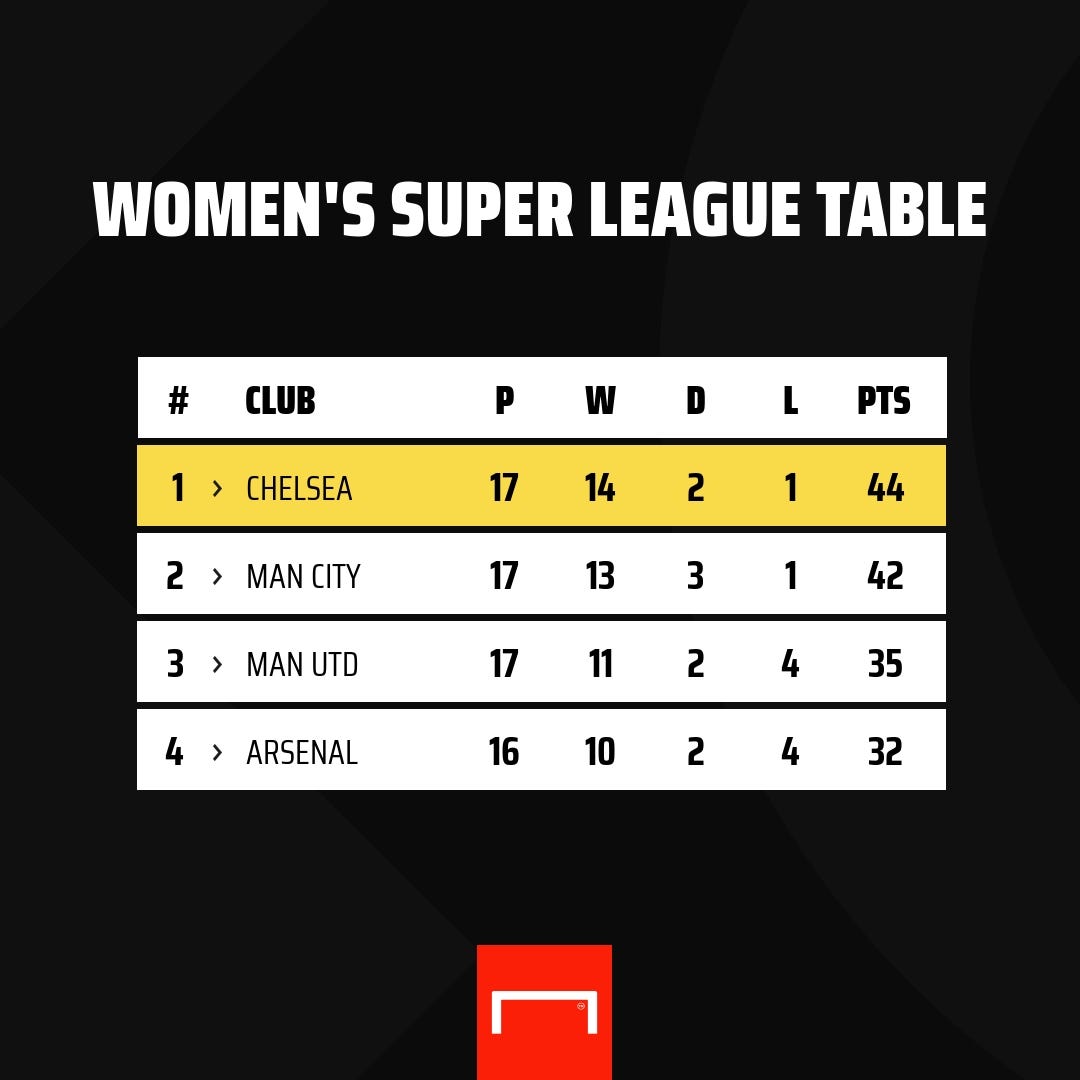 For Arsenal, they go into the final stretch of the season rejuvenated, with key personnel back from injury, and confident, having taken their first three points off a fellow ‘big four’ team this season.

“Momentum has probably been our biggest issue this year, more based on fixtures and how things have landed,” Montemurro said. “It was great to get the games going and I suppose, like anything, when the momentum is going your way, it just keeps rolling.”

Despite every setback they have faced this year, momentum is certainly with Arsenal now.

A month ago, they were seven points off the top three, with people ready to rule them out completely.

Now, if they can at least match United’s results from now until the end of the season, they will be playing Champions League football next season.