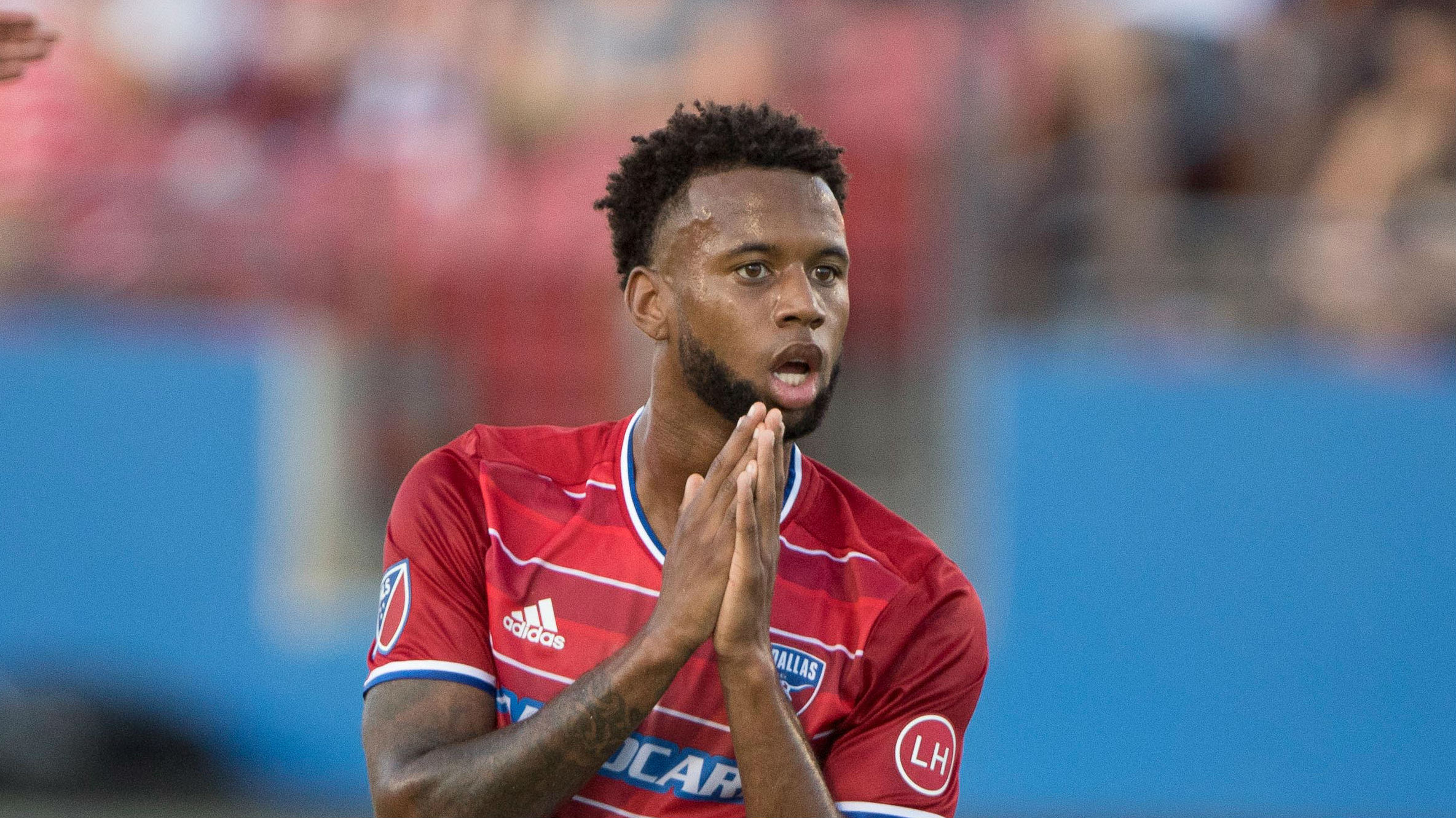 As Sporting Kansas City lifted the U.S. Open Cup on Wednesday night, it became clear that Peter Vermes' team just might be able to win multiple trophies given its appearance as a legitimately MLS Cup contender. It won't be an easy double to pull off, but it's one Sporting KC looks capable of doing.

Back when the 2017 season began, the one team most people would have put their money on pulling off the U.S. Open Cup-MLS Cup double was FC Dallas. Last year's Supporters' Shield winner came into 2017 with the highest expectations in the league. The Hoops made a run to the CONCACAF Champions League semifinals, and there was even talk of a potential treble. That's how good FC Dallas looked, and how much promise Oscar Pareja's squad showed.

Much has changed in the six months since those promising beginnings. FC Dallas has gone nine straight matches without a win, and now the team that posted the best record in MLS in 2016 suddenly finds itself in eighth place in the Western Conference, and in danger of missing the playoffs altogether.

The New York Red Bulls also came into the 2017 season with high expectations. Two straight successful seasons under Jesse Marsch made this year the one where the Red Bulls take another step forward. Unfortunately, that step appears to have been backwards. Though they did just play in the U.S. Open Cup final — which they lost to Sporting KC — the Red Bulls have slipped down to sixth place in the Eastern Conference, and sit just three points away from falling out of playoff position.

Both FC Dallas and the Red Bulls head into MLS Week 29 facing crucial matches, with a loss leaving them in serious jeopardy heading into the season's final month.

This weekend also marks the beginning of a new era in New England, where the Revolution must begin life after the departure of head coach Jay Heaps, and must do so by beating a Toronto FC side smarting from a surprising home loss on Wednesday.

Meanwhile, in the wild Western Conference, the Vancouver Whitecaps will look to extend their slim lead atop the West with a win against last-place Colorado, while Seattle visits Real Salt Lake in another one of the weekend's top match-ups.

Here is a look ahead to some of the key talking points in MLS Week 29:

This has to be the week things turn around for FC Dallas, right? The surprise at FC Dallas' struggles has subsided and been replaced by the realization that the Texas club has run out of rope and must turn things around before the playoff coastline gets too far out of reach.

A nine-match winless slide is as brutal as it sounds, but things aren't quite as desperate as they may seem for the Hoops. They have at least one game in hand on three of the teams ahead of them, and their upcoming schedule is about as cushy as you could hope for if you are a team trying to end a slump. When you consider that last week's draw against Seattle was actually a solid performance you realize the turnaround should begin in full this weekend.

Of course, Minnesota United will have something to say about it, and after some brutal early-season struggles, the Loons have become a much more competitive team, and one capable of capitalizing if a team doesn't bring its best. That said, FC Dallas has shown signs of life recently. A 3-0 loss in Atlanta United wasn't pretty, but the 2-2 draw against the Red Bulls and draw against the Sounders on either side of that loss showed an FC Dallas team capable of playing the kind of soccer we've expected to see.

The schedule makers have set up the potential for a big week for FC Dallas.  The three teams in front of FCD in the West standings all have either road games or tough match-ups, and there is a possibility FC Dallas could jump all the way to fifth place in the West this weekend with a win and some other results going its way. That would be a big first step toward a potential climb back into the top four, but first FC Dallas must win its first match since July 22.

Rebounding from a cup final defeat is never easy. Having to recover in time to face a team unbeaten in six matches makes this week a brutal one for the New York Red Bulls.

The Crew have been on a good run since the All-Star break, and their current 3-0-4 stretch has them looking comfortable in the East playoff race. They aren't completely out of danger though, and currently sit just five points ahead of seventh-place Montreal, with the Impact holding a game in hand. A win over the Red Bulls would make for easier breathing in the coming weeks.

The Red Bulls have a three-point lead on Montreal for the final playoff spot in the East, and they hold a game in hand on the Impact, but a loss in Columbus would erode that cushion. The good news for the Red Bulls is Montreal has to travel to Atlanta and face the buzzsaw that has been Atlanta United's attack. The bad news is the Red Bulls will surely be tired from Wednesday's Open Cup loss, while the Crew head into Saturday's match rested.

Lee Nguyen vs. Michael Bradley. If Nguyen has aspirations of a national team return, he could pick a worse showcase than a match-up against the USMNT captain.

Josef Martinez vs. Laurent Ciman. Nobody has been able to stop Martinez in recent weeks, but Ciman is one of the league's best.

Albert Rusnak vs. Osvaldo Alonso. Chasing around Rusnak is no easy task, especially at altitude, but Alonso has the engine to contain the RSL playmaker.

Benny Feilhaber vs. Jonathan Dos Santos. It hasn't been a great time in MLS for Dos Santos since his arrival, and he'll face another tough assignment in Feilhaber (if Feilhaber isn't rested post-U.S. Open Cup that is).

Kei Kamara vs. Drew Moor. The TFC defense was shredded for five goals against Montreal, something Kamara will certainly have noticed. Whether it's Moor or Eriq Zavaleta, TFC's defense must keep tabs on Kamara.

Sacha Kljestan vs. Wil Trapp. Can a tired Kljestan rebound from the U.S. Open Cup final loss and have an impact with Trapp working to neutralize him? That will be the challenge.

Dom Dwyer vs. Liam Ridgewell. These English countrymen should engage in a physical battle, though Cyle Larin's presence could also keep Ridgewell occupied.

Francisco Calvo vs. Maxi Urruti. The FC Dallas attack needs Urruti firing to get rolling, but Calvo has the quality to make things tough for the Argentine striker.

Chris Wondolowski vs. Steve Birnbaum. Wondolowski's ability to make well-timed runs and find the gaps in a defense make him consistently dangerous, which will be a good test for Birnbaum.

New York City FC 2, Dynamo 0. It's tough to know how NYCFC will be affected by playing its home game away from Yankee Stadium, but the Dynamo have been bad on the road wherever they go.

Revolution 1, Toronto FC 2. The midweek loss to Montreal was a stunner, but Greg Vanney's men should rebound well against a Revs team beginning life after Jay Heaps.

D.C. United 1, Earthquakes 2. D.C. is playing out the string while the Earthquakes are playing for their playoff lives. It isn't easy for West Coast team to go cross-country and win, but the Earthquakes pull this out.

Union 1, Fire 2. The Union's season has become another funeral procession, and the Fire's desire to finish in the top two in the East should offer motivation enough for a big road win.

Crew 2, Red Bulls 1. A tough midweek U.S. Open Cup final loss will test the Red Bulls' resolve as they head to Columbus to face an in-form Crew side that will be rested and ready to pounce.

Minnesota United 1, FC Dallas 3. As much as the Loons have shown themselves to be capable of good home performances, this is the week FC Dallas snaps out of its 10-match funk to win big.

Real Salt Lake 1, Sounders 1. RSL has made Rio Tinto Stadium a tough place to play again, and the Sounders will find this out in what should be a tightly-contended clash.

Whitecaps 2, Rapids 0. The Rapids won't be the team to halt the Whitecaps unbeaten run, with Yordy Reyna continuing his stellar play.

Sporting KC 3, Galaxy 0. What cup hangover? Peter Vermes might rest some starters after Wednesday's U.S. Open Cup triumph, but it won't matter against a Galaxy side that is a complete mess.

Atlanta United 3, Impact 0. After ending TFC's unbeaten home run, the Impact should be able to make things interesting in Atlanta, right? Don't bet on it. The Five Stripes keep rolling.

Timbers 3, Orlando City 1. The Timbers stumbled last week in Utah, but Caleb Porter's side should return to their winning ways at Providence Park.