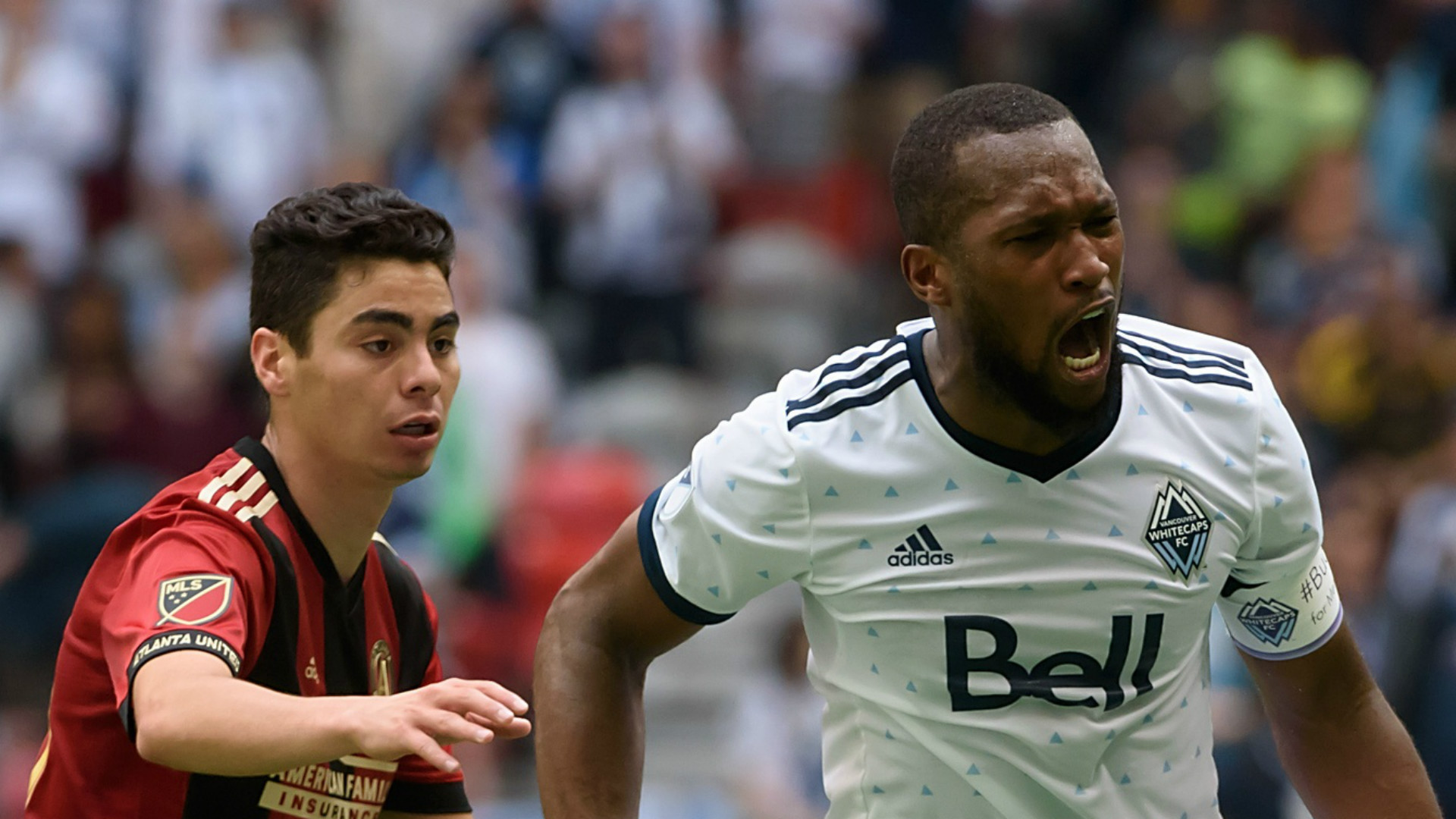 After handing Houston a rare home loss, the Whitecaps are heading to another tough venue to take on Gerardo Martino's side

It was a banner week for Major League Soccer in CONCACAF Champions League play, but Toronto FC and the New York Red Bulls don't have much time to celebrate their triumphs as they jump back into league play.

TFC held off a strong Tigres side to reach the CCL semifinals but must now head to Montreal for the year's first installment of their rivalry with the Impact. TFC coach Greg Vanney will look to his bench for options, particularly after Justin Morrow and Chris Mavinga picked up injuries in Mexico.

The Red Bulls are riding high after their rout of Club Tijuana, and they'll see a familiar face in former New York coach Mike Petke when they visit Real Salt Lake on Saturday. RSL is looking to rebound from a shellacking by Los Angeles FC, and could wind up facing a reserve-heavy Red Bulls side. That is no guarantee of a victory, though, as the Portland Timbers learned a week ago.

The most exciting game of the weekend should take place at Mercedes-Benz Stadium, where a packed house will see Atlanta United take on the unbeaten Vancouver Whitecaps. Last week's 3-1 victory against D.C. United has fans in Atlanta calm again after a worrisome season-opening loss to Houston, but the Whitecaps represent the toughest challenge of the season so far.

This weekend will also see Sacha Kljestan return to the New York area for the first time since being traded away by the Red Bulls. He'll be heading to Yankee Stadium, where New York City FC will be looking to go 3-0 by beating an Orlando City squad still searching for its first win of the season.

Here is a closer look at the key talking points for MLS Week 3:

MATCH OF THE WEEK: Atlanta United vs. Vancouver Whitecaps

Atlanta United is one of the toughest teams in MLS to deal with on its home field. Mercedes-Benz Stadium provides an atmosphere that helps give Atlanta's high-flying attack another gear, and it can sometimes overwhelm opponents. The Whitecaps are coming off an impressive win in Houston against a Dynamo side that lost at home just once in 2017, and had thrashed Atlanta just a week earlier.

If Atlanta can take something away from Vancouver's trip to Houston, it's that the Dynamo succeeded in dominating possession — and creating many more chances — only to be undone by poor finishing and bad defending on the counter. Whitecaps goalkeeper Stefan Marinovic came up with several big saves to secure the victory, and there's a good chance he will be busy once again on Saturday.

Atlanta coach Gerardo "Tata" Martino deployed a 3-5-2 system against D.C. United and it looked much better than the 4-2-3-1 used in the loss to Houston. The change allows Atlanta to put an extra body in the midfield, which helps offset the lack of a top-level defensive midfielder — which Atlanta is currently scouring the market for. Against a Whitecaps side that is likely to set up with a five-man midfield behind striker Kei Kamara, Martino may not have much choice but to go with the 3-5-2 again.

One theme in the lead-up to this meeting is set piece defending — something Atlanta struggled with mightily in last year's matchup. That could be an issue again, especially if Leandro Gonzalez Pirez can't recover from a hip injury. To make matters worse for Atlanta, the Whitecaps have more dangerous weapons in the set-piece department than last year.

"It's no longer just Waston, like last year — now there's Kamara, so you have to be very careful," Martino told reporters. "It's one of the most important qualities they have."

As important as set pieces will be, Atlanta must control possession and limit Vancouver's chances on the counter. The Dynamo did a good job of controlling possession last week against Vancouver — with 67 percent — but Marinovic's saves kept the Dynamo from capitalizing fully.

This is a match that has Darlington Nagbe's name written all over it. The longtime Portland Timber has a highlight reel full of big plays against the Whitecaps, and he'll be a key factor in Atlanta's game plan, with his ability to find the gaps in Vancouver's midfield.

For the Whitecaps, getting the ball to Kamara will be key, especially if Gonzalez Pirez can't play. Michael Parkhurst is a seasoned veteran, but Kamara's physicality could cause problems for his former Columbus Crew teammate. A Gonzalez Pirez absence could also mean a shift back to a four-man defense, which may give Parkhurst the help he needs to deal with Kamara.

"We know that there's areas in Vancouver's game where we believe they're weak, so we'll try and take advantage of them," Whitecaps coach Carl Robinson told reporters. "I'm sure it'll be a barnstormer. We know that."

More than three years have gone by since Mike Petke was fired as New York Red Bulls coach in surprising fashion, and while it would be natural to still harbor some resentment over his departure from the club he spent so much of his career playing for and coaching, Petke wasn't acknowledging it publicly.

Petke's Real Salt lake will host the Red Bulls on Saturday, and he insisted his only focus is on the match — not on revenge against the team that let him go in a widely criticized move at the time.

"There's no significance to this because it’s New York," he added. "Perhaps if I was coming back to play in Red Bull Arena there'd be a heck of a lot more significance to me."

Petke has much more pressing concerns heading into Saturday, namely how to get his team to respond after last week's embarrassing 5-1 loss to expansion side Los Angeles FC. Petke apologized to RSL fans for the performance, but now he must figure out how to address the issues raised in that match, starting with some defensive flaws the Red Bulls will be eager to exploit.

The Red Bulls are a much different team now than when Petke was their coach, with Bradley Wright-Phillips, Luis Robles, Connor Lade and Ryan Meara the lone first-team holdovers from Petke's tenure as coach. Jesse Marsch has infused plenty of young talent into the squad in recent years, and could choose to deploy a reserve-heavy side in Utah on Saturday after his team's CONCACAF Champions League win against Club Tijuana on Tuesday.

Albert Rusnak vs. Tyler Adams. Two of the league's best young talents square off in what should be one of the keys to the RSL-Red Bulls clash. (That's assuming Adams isn't rested after his stellar showing against Tijuana.)

Kei Kamara vs. Leandro Gonzalez Pirez. If Gonzalez Pirez can recover from the hip injury he's nursing, he will have a very tough assignment in the physical and in-form Kamara.

David Villa vs. Jonathan Spector. Spector saw plenty of Villa last year, and he will need help from his teammates to try and contain the Spanish star.

Josef Martinez vs. Kendall Waston. Martinez is going to provide a very different kind of test for Waston than he's seen in the first two weeks of the season, but the big Costa Rican will be up for the challenge.

Ignacio Piatti vs. Gregory van der Wiel. Piatti is one of the toughest players in MLS to defend, but Van der Wiel's quality should give him a good chance of containing the Argentine standout.

Valeri Qazaishvili vs. Graham Zusi. Zusi isn't known for his defensive qualities, but he'll need to be at his best to keep Vako from spearheading San Jose's attack.

Sacha Kljestan vs. Yangel Herrera. Kljestan is very familiar with the NYCFC tandem of Herrera and Alexander Ring, and he must have a big game to give Orlando City any chance of a big road win.

Federico Higuain vs. Haris Medunjanin. Higuain is off to a hot start to the season and will look to unlock a Union midfield that Medunjanin was quoted as saying he believes is better than the Crew's.

Justin Meram vs. Anton Tinnerholm. Kljestan's return should help Meram focus on attacking from his traditional left wing role, which sets up him against Tinnerholm, who is looking like one of the more underrated signings of the new season.

D.C. United 1, HOUSTON DYNAMO 2. D.C. has its first home game of the season at the Maryland SoccerPlex while awaiting the completion of Audi Field. The Dynamo will look to improve their road record after an abysmal 2017, and should have the attack to overwhelm D.C.'s defense.

Minnesota United 2, Chicago Fire 2. The Loons are dealing with the loss of Kevin Molino, but with Ethan Finlay in form, and Christian Ramirez still a threat, goals should still come in this Midwest clash.

PHILADELPHIA UNION 2, Columbus Crew 1. The Crew come in as the favorite, but the Union are rested and ready to show they need to be taken seriously. C.J. Sapong will be the difference.

Montreal Impact 1, TORONTO FC 2. Greg Vanney will have to consider resting some players after the grueling CCL match against Tigres, but TFC's depth is strong enough to top an unimpressive Impact side still waiting for reinforcements.

ATLANTA UNITED 2, Vancouver Whitecaps 1. The Whitecaps have the attack to test Atlanta's defense, but this will be a very difficult challenge for Vancouver's defense, which may start missing Tim Parker soon.

SPORTING KANSAS CITY 2, San Jose Earthquakes 0. The Sporting KC defense gets back to its stingy ways after a rough first two weeks, and while San Jose impressed in its season opener, this one is a bit too tough for the Earthquakes.

Real Salt Lake 1, NEW YORK RED BULLS 2. Fresh off an ugly home loss, RSL needs to rebound, and could find a vulnerable opponent in a Red Bulls side coming off CCL action. That said, New York's depth shines for the second straight week.

FC DALLAS 2, Seattle Sounders 0. The Sounders limp into Frisco, Texas, off an ugly CCL loss, with a pile of injuries that will leave Brian Schmetzer without many of his best players. A rested Dallas should take full advantage of that.