The 22-year-old excelled against Ajax in the absence of Alisson Becker, and now looks certain to keep his place for the clash with Wolves

At the final whistle, Jurgen Klopp knew exactly where to head.

To his goalkeeper. To Caoimhin Kelleher, the hero of the hour as far as Liverpool were concerned.

He loves a bear hug, the Reds boss, but this one had a bit more behind it.

“I thought for a second ‘don’t do it’ because the cameras were on,” said Klopp, grinning from ear to ear. “But come on, who cares?!”

What a night for Kelleher. Making his Champions League debut, the 22-year-old was in inspired form, the star performer as a heavily-depleted Liverpool defeated Ajax at Anfield to secure their place in the last 16. It was only his fifth professional appearance, but he’ll never forget it.

What a week it has been for the Irishman. On Saturday he conceded seven at Kirkby as the Under-23s were battered by a rampant Manchester City, and yet here he was, three days later, under the spotlight, repelling one of Europe’s most famous sides.

“Amazing,” Kelleher reflected afterwards. His phone, he said, had been “hopping” as the messages of support and congratulations rolled in.

He’d found out he was playing on Monday afternoon. Alisson Becker had tweaked his hamstring at Brighton, leaving Klopp with a big call to make. 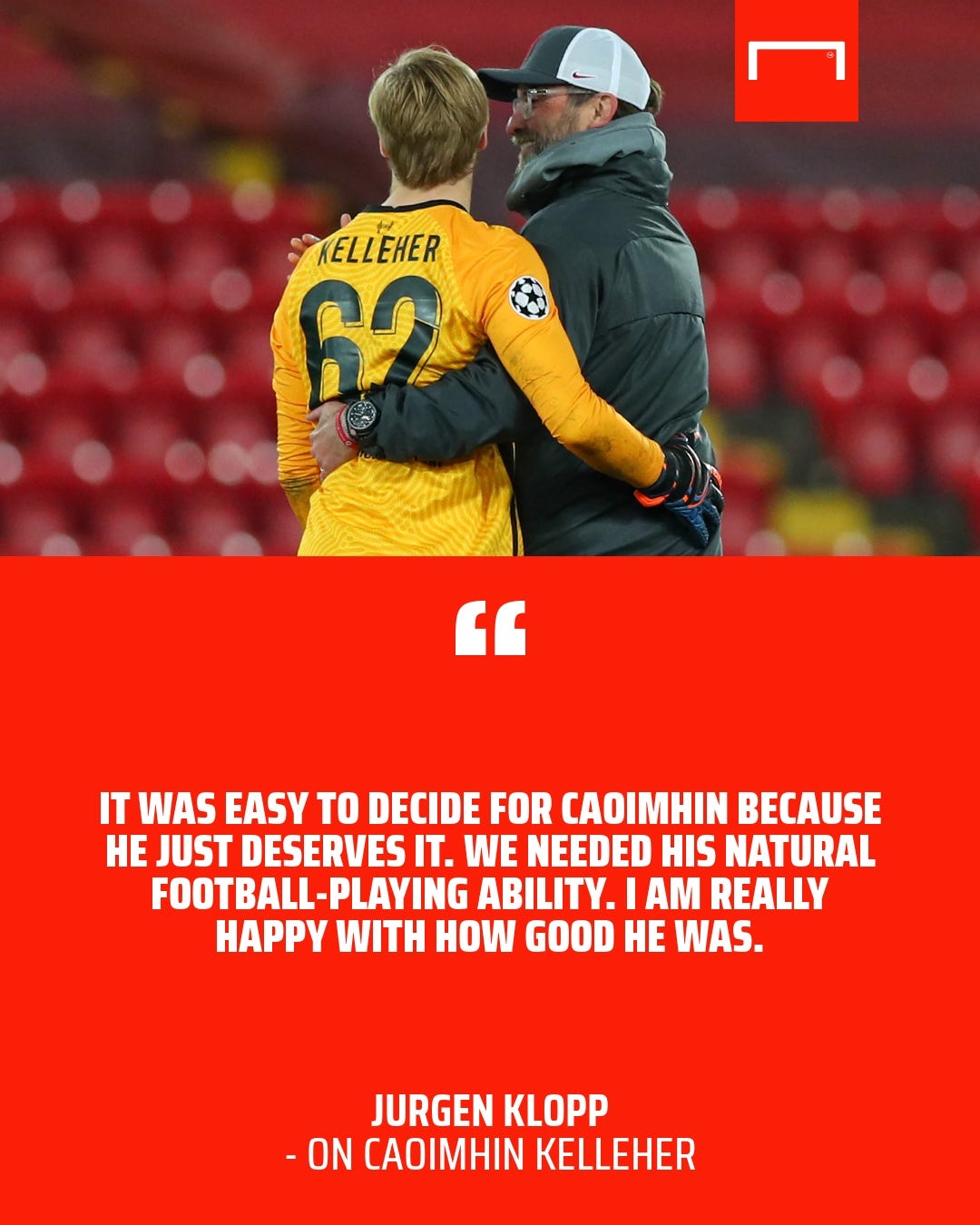 Experience or youth? Stick with Adrian, the much-maligned number two, or go for something different?

He went for the latter, and the gamble paid off.

“It was easy to decide for Caoimhin because he just deserves it,” Klopp said afterwards. “But it was difficult to decide against Adrian because he did really well for us.

“But tonight we needed the package of Caoimhin. We needed his natural football-playing ability.

“We made that decision but you never know how they are going to cope. I am really happy with how calm he was and how good he was.”

Kelleher’s contributions proved decisive, a strong hand to turn over Noussair Mazraoui’s 25-yarder in the first half, a smart stop to his right to deny the same player after the break and then, best of all, razor-sharp reflexes to keep out the substitute Klaas-Jan Huntelaar’s point-blank header three minutes from time.

Big saves, important saves. The saves that will surely ensure he keeps his place for the visit of Wolves on Sunday.

A Premier League debut beckons, for the man from Cork. 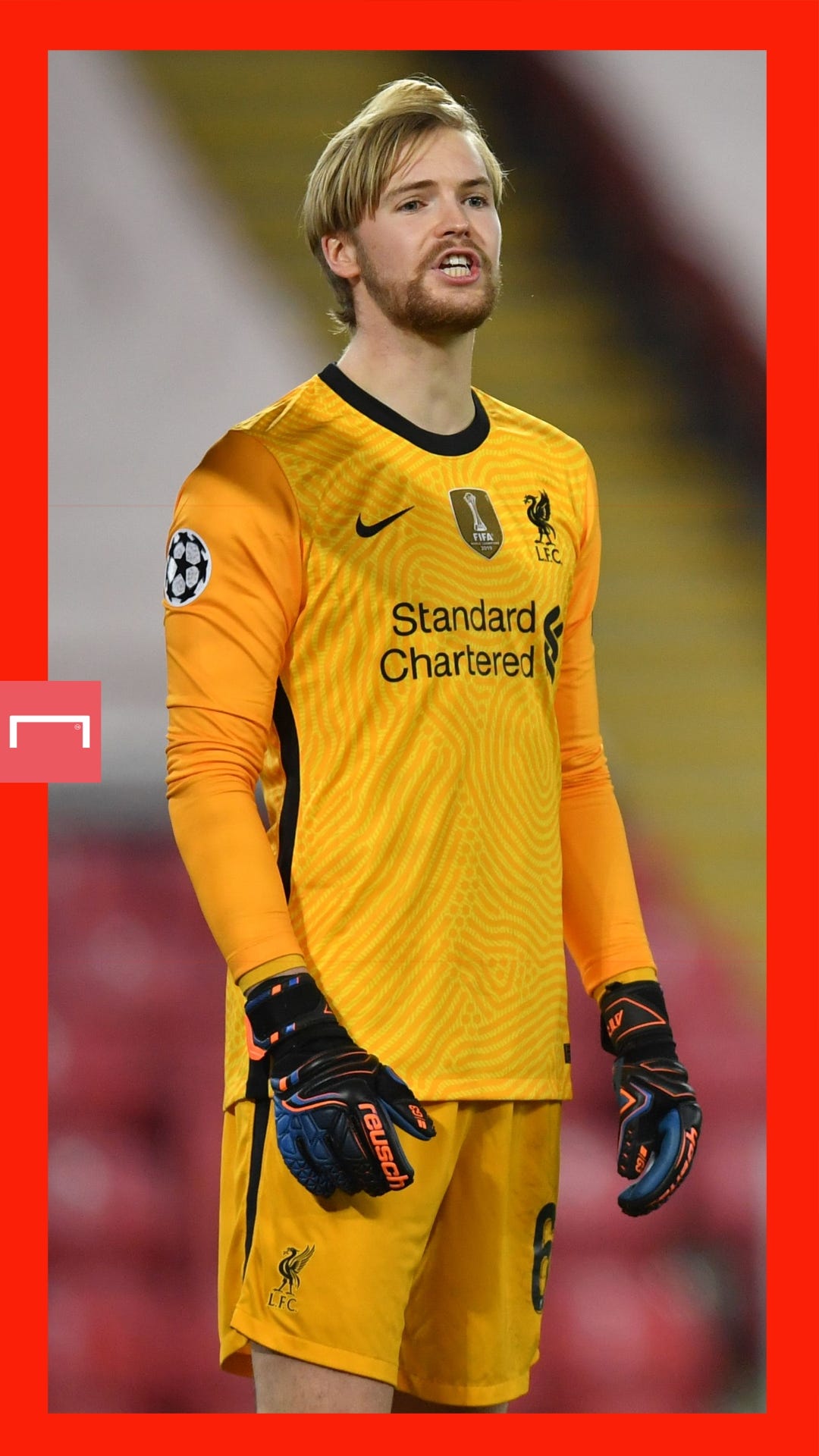 It may have come sooner, but for an ill-timed bicycle accident. Kelleher suffered a broken wrist after an ill-timed tumble during his summer holiday in 2019.

Had he not, he may well have been the man to step in when Alisson suffered a calf injury in the Reds’ first league match of the campaign a couple of weeks later. As it was, Adrian was given the chance.

Kelleher still played four times last season, with mixed results. He conceded five times in two of those outings, though he also kept two clean sheets and saved crucially from Dani Ceballos in a penalty shootout win over Arsenal in the Carabao Cup.

His last appearance was against Shrewsbury in the FA Cup in February, a game which bore a striking similarity with Tuesday night – a defiant 1-0 win in which Curtis Jones and Neco Williams excelled for the Reds.

Kelleher joined Liverpool in 2015 having been spotted playing for local side Ringmahon Rangers. He might have gone to Manchester City, according to club treasurer Paul Higgins, while Fulham and Aston Villa had him on trial. Five years on, their loss is very much Liverpool’s gain.

A prolific striker in his younger years, it is no wonder Kelleher looked so assured with his feet – both of them – against Ajax. His ability to clip passes to his full-backs, something Adrian has struggled with when called upon, was key as Liverpool sought serenity and composure against the Dutch champions’ high press.

“We needed that,” Klopp admitted. “He’s a top footballer.”

Liverpool had considered loaning out Kelleher, both in January and in the summer. There was interest from the Championship, but they instead chose to send Kamil Grabara, the Poland U21 international, to Danish side AGF Aarhus.

Grabara and Kelleher, generally, have been seen as equals in terms of potential. Liverpool also have Vite Jaros, the highly-rated Czech who was part of their Youth Cup-winning team of 2019, and recently signed Marcelo Pitaluga, the Brazil U17 international, from Fluminense.

Pitaluga, ineligible for the Champions League, played for the U18s in a 4-1 win over Burnley on Tuesday night, and is already said to have caught the eye of senior staff. Keep an eye out for the 17-year-old's development.

Kelleher, though, is the man with the chance now. He’s had to wait for it, but against Ajax he justified Klopp’s faith.

“Top, top, top,” said the manager when asked to assess his performance.