In picking his perfect player in terms of speed, skill and stamina, the ex-England full-back discusses superstars from Cristiano Ronaldo to Ronaldinho

Ashley Cole is halfway through saying that Lionel Messi only scored one goal against Chelsea during his eight-year spell at Stamford Bridge when he realises that the Barcelona superstar actually never netted against his Blues.

So, how did he do it, then? Surely, the former full-back knows the secret to stopping arguably the greatest player in history?

"It wasn't just me!" a smiling Cole stresses during an interview with Goal as part of the Nissan UEFA Champions League Trophy Tour.

"That's been thrown about but the team effort was massive. When it came to stopping players like him, we had a great team understanding and togetherness at Chelsea.

"Our midfield was integral in that regard. It certainly wasn't just me. I wasn't blowing my trumpet there by pointing that out!"

Indeed, Cole proves nothing but humble as he picks his perfect player.

While selecting Brazil legend Cafu for his stamina, the former England international admits, "I thought I had a good engine but when I came up against him, I was left on my knees!

"I even later played against him in a charity game for David Beckham and I don't know how old he was at the time but he still had the stamina he had at 20 or 25 years of age! He was non-stop, a machine."

Then, in explaining his choice of Arjen Robben's left foot ahead of all others, Cole concedes, "I played against him for Roma and he absolutely destroyed me!"

Cole, though, was for many years the best left-back in the world, an excellent defender who was also fantastic going forward.

He enjoyed numerous memorable battles with Cristiano Ronaldo during the Portuguese's stint in the Premier League, when he was primarily used as a winger by Manchester United. 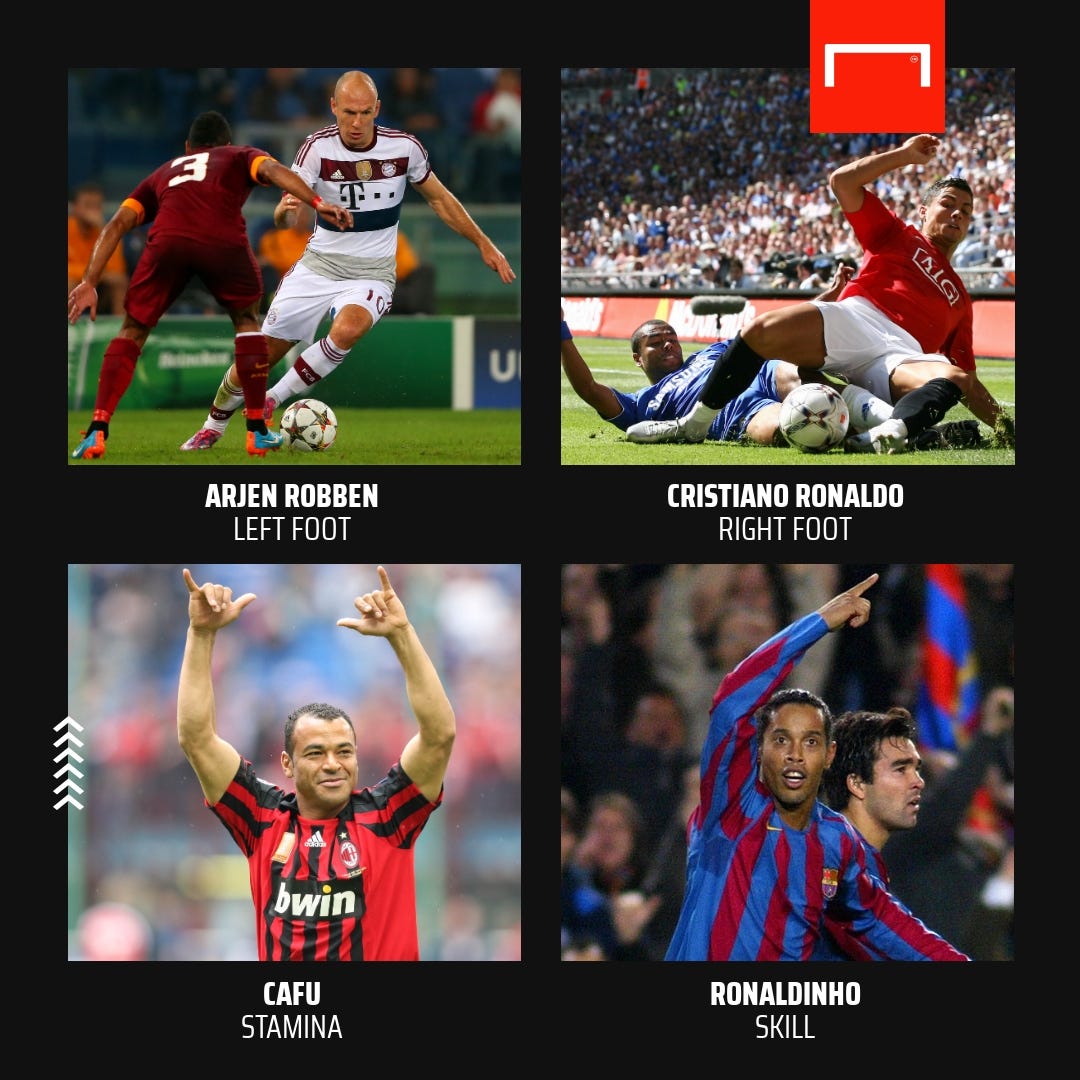 Getty/Goal
Cole arguably fared better than anyone against a player who he says had the best right foot he ever came across.

"I was going to say David Beckham here, because I think he could put a ball on a sixpence, but I think I will go for Ronaldo," the 40-year-old muses.

"He was one you just couldn't give any space to. So, it was about being on the front foot, being aggressive and trying to get out to him and not let him get his head up and start doing the stepovers.

"It was about understanding that 'I can't let balls go in behind me.' I had to allow them go to his feet, but get out quick to him and stop him at source."

That tactic didn't often work against Ronaldinho, though. As Cole admits, sometimes he was just left awestruck by the fancy footwork of the Brazilian, whom he names as the most skilful attacker he ever faced.

"Even though I was in battles against him, sometimes I'd laugh to myself when he pulled off a crazy piece of skill or nutmegged someone," the Chelsea academy coach enthuses.

"Even as you're playing against him, you enjoy watching him play. The way he floated across that turf, doing stepovers, finding passes with every party of his foot... He was like a magician.

"You see a lot of players who feel like they have the skills but he was efficient, too; he did it in the right areas. He cut teams apart with his skill. He had everything."

Ronaldinho also scored three goals against Chelsea but, interestingly, not one during Cole's time at the club. The World Cup winner has that in common with former Barca team-mate Messi.

Not that Cole will take any credit for that coincidence, of course...