When Ebony Salmon faced Manchester United just over a year ago, she was always going to have a little more fire in her belly than usual.

The striker already has a fantastic strike-rate at the tender age of 20, averaging more than a goal every other game through spells with Aston Villa, Sheffield United and now Bristol City.

Such is her importance for her current club that, if you took her goals away from the Vixens this season, they’d have just one point to their name in the Women’s Super League and they certainly wouldn’t be in the last four of the Continental Cup.

But while her double in the quarter-finals – which put Bristol through to Wednesday’s tie against Leicester – might rank among the highlights of her career so far, her strike against Manchester United in last year's league meeting still occupies top spot in that particular list.

The forward had a brief stint with the club in between her spells with Villa and Sheffield United, but failed to make a single appearance before leaving to join Bristol in the summer of 2019.

A few months later, she was the only name on the scoresheet as the Vixens shocked United with a 1-0 win that helped keep them in the division last season.

"I had a few conversations there when I was leaving, questioning if I was ready for that league,” she told Bristol Live last month. “I think that [goal] just proved people wrong – and proved that I was.”

Fast forward 12 months and her reputation has only grown. Her goals are again proving crucial in Bristol’s battle to stay up, with two against Brighton on Saturday helping them to their first win of the season.

But she could help them secure something even more unlikely tomorrow: a place in a cup final.

“She's on fire at the moment. It's great to have someone like Ebony in our team,” Bristol captain Jasmine Matthews said.

“At the start of the year, maybe she wouldn't have finished those chances that she's getting, but now she doesn't miss. That's just vital for us as a team.

“Maybe previously we only got one chance and that's when we really needed her. But now she's getting two or three chances. Like on the weekend, she had a few more chances.

“She's working so hard in training and she does a lot of one-v-one with the coaches, so her hard work is definitely paying off and it's really good to see.”

That greater ruthlessness in front of goal certainly shows in the statistics. Of players on the receiving end of three or more big chances in the WSL this season, no one has a better conversion rate than Salmon, who has scored five of her six. 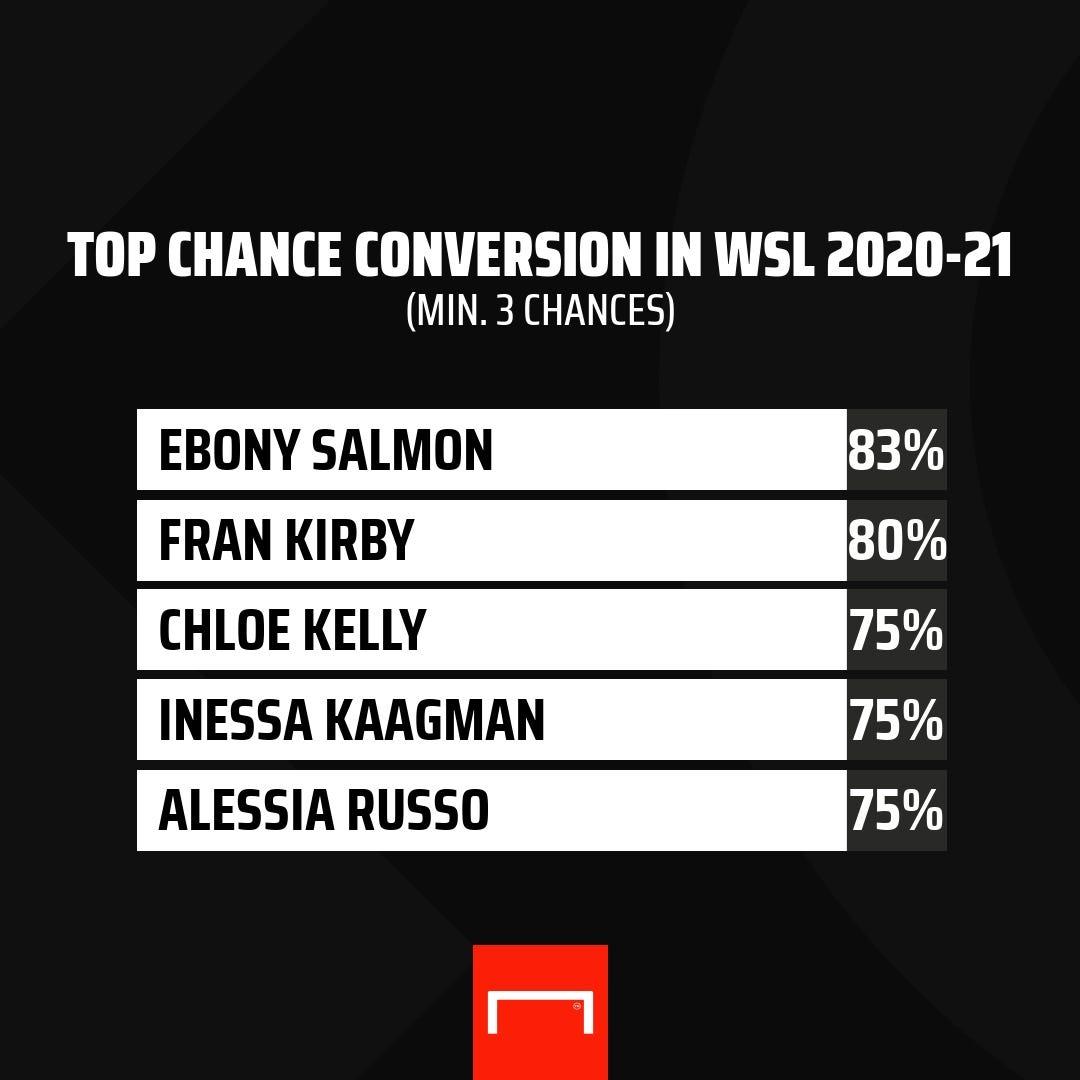 “She's got all the attributes to become one of the best,” said Matt Beard, who is currently in temporary charge of Bristol while head coach Tanya Oxtoby is on maternity leave.

“If I were the England manager, I'd probably be looking at her now in the senior team because she's scoring goals in a team that has struggled this year, on a regular basis.

“She’s more than just off the shoulder. She's strong, she's quick, she's good in tight spaces. What a player England have got for the future!"

Plenty of England’s most exciting young talent has been given its chance in their recent training camps, from Man Utd’s electric forward Lauren James to Birmingham goalkeeper Hannah Hampton.

Salmon has already excelled at youth level, with 17 goals in 26 games across the Lionesses’ Under-17 and U19 teams, and if she keeps up this form in the top flight, it won’t be long until the 20-year-old is in the senior international picture.

For now, her task is on helping Bristol stay in that top flight, though, with a prolific cup run not only boosting the confidence in the dressing room, but also giving them a flurry of games in which to maintain their new found momentum.

Should Salmon and Bristol continue that form this week and secure an unprecedented place in March’s Continental Cup final, it’s a moment that might even top that goal in Manchester for the young striker.