Want to play like last season's Premier League champions? Here's how you can tweak your formation and tactics to conquer FIFA 20

FIFA 20 is the most realistic football simulation available, with teams in the game set up to play like their real-life counterparts.

When playing FIFA 20, you will find some teams more difficult to break down than others, while top-quality sides like Real Madrid and Bayern Munich attack with quick wingers.

You can also set up your own team to play in a particular style using the in-game formation settings and assigning individual tactics to players.

As a result, you can set up your side to play like Pep Guardiola's Manchester CIty. Here's how...

Guardiola has used a variety of formations including fielding three-at-the-back against Sheffield United this season, but usually lines out in 4-3-3 or 4-2-3-1. The addition of defensive midfielder Rodri has made both of these options successful in 2019-20, as his defensive traits make him capable of doing the dirty work and stopping attacks before they even begin.

These two formations are both effective in FIFA 20, and usually work best in the game with pacey and skillful wingers, much like Guardiola uses in Raheem Sterling, Riyad Mahrez and Leroy Sane. Finding quick, technical wingers who are strong with both feet and can cut inside effectively is essential to playing like Man City in FIFA 20.

The version of 4-3-3 that most resembles Guardiola's setup in FIFA 20 is known as 4-3-3 as it has a deeper midfielder in the centre of the pitch to fill the role that Rodri plays for Man City.

Long before he moved to the Premier League, Guardiola managed sides that favoured possession football. If your opponent does not have the ball, then it is impossible for them to score. Keeping the ball is central to the Guardiola ideology, but so is winning the ball back quickly. 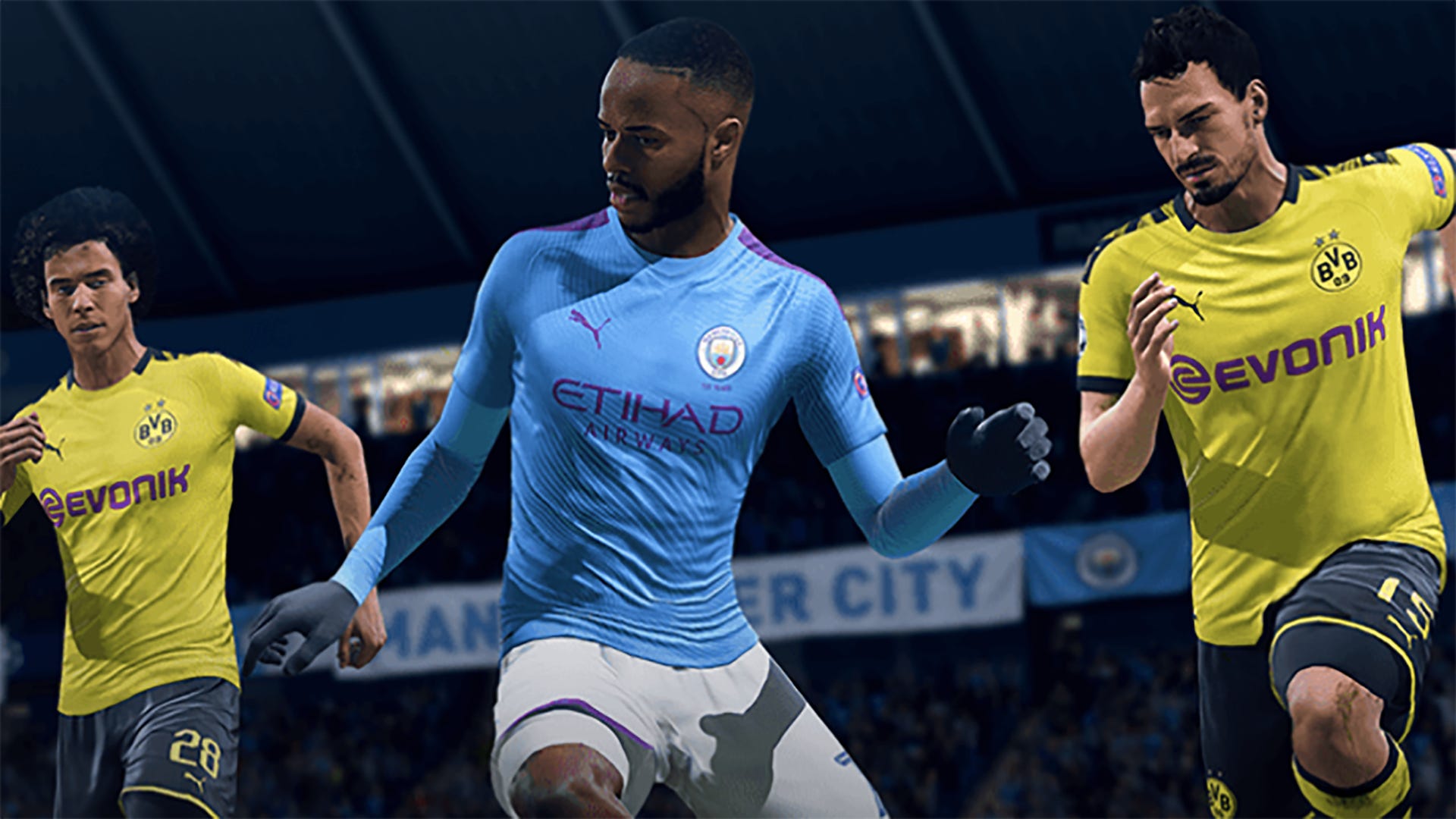 His teams press high up the pitch and press quickly after turning the ball over. To play like Man City in FIFA 20, you will need to have players who have high ratings in both stamina and defensive awareness, as well as people who are adept at standing tackle and interceptions.

In real life, City often find themselves playing against teams who sit deep, but this is less likely against online opponents in FIFA 20. As a result, ball-playing centre-backs like Aymeric Laporte are less crucial in FIFA than they are for Guardiola.

Most opponents in FIFA 20 will also play a high press, which Guardiola gets around in real life by instructing his players to pass the ball around opponents with short, quick passing movements. Players with short passing traits as well as good agility are recommended to execute this approach.

Opponents in FIFA also like to use the "Overload Ball Side" instruction, which remains effective in the game even after EA attempted to lower its impact in recent patches. This leaves team-mates in space on the opposite flank, which is something Guardiola's teams also do by utilising long passes across the field. Full-backs and wingers with high long passing stats are essential to make this work in FIFA 20. 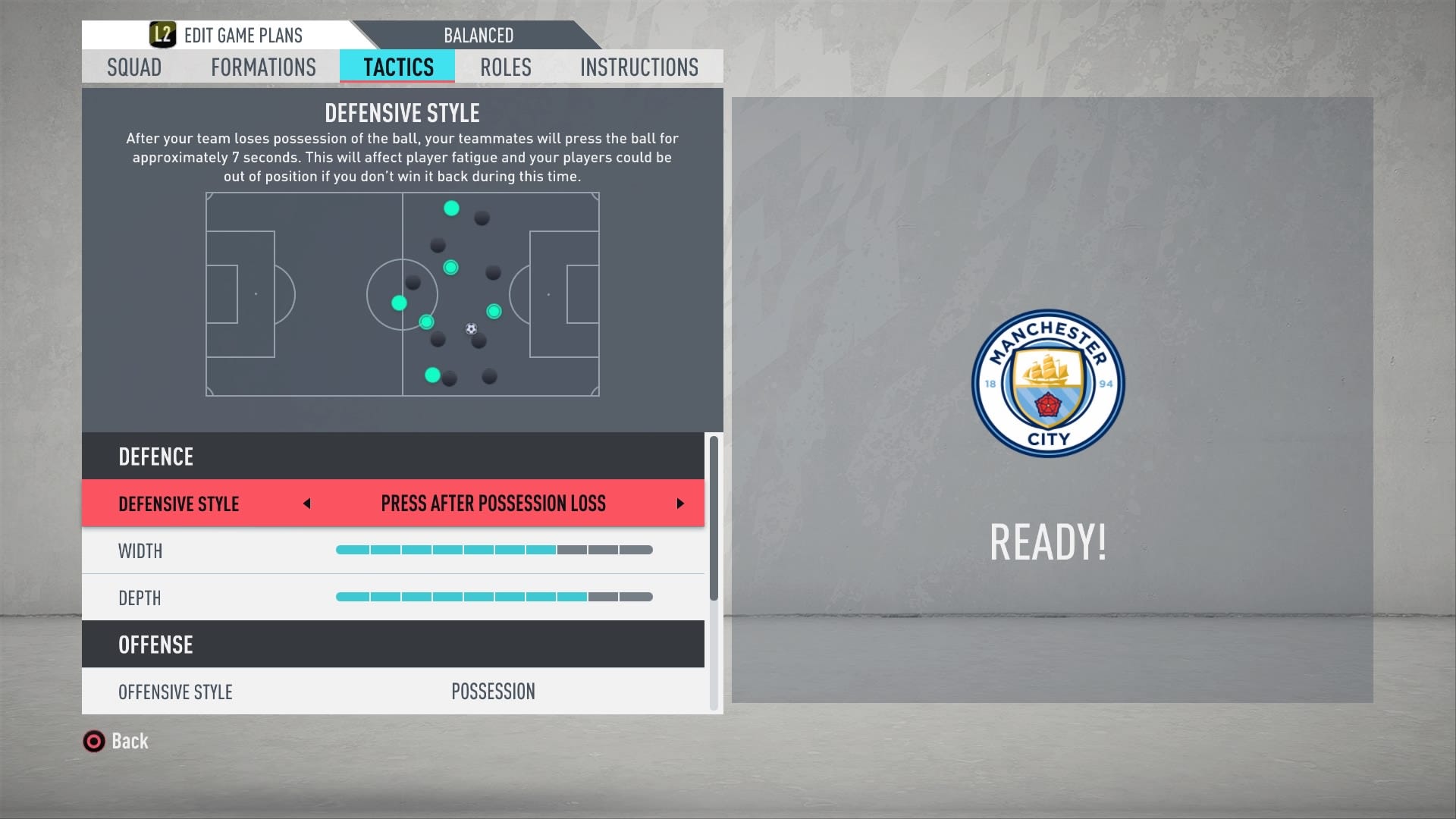 The key to making your FIFA 20 team play like Guardiola's Man City is to use custom tactics. You can tweak both defensive and offensive tactics as well as telling individual players to fulfil certain roles in the game, just like the Catalan coach does with his City side.

You can replicate Guardiola's high-pressing style in FIFA 20 by setting your Defensive Style to Press After Possession Loss. This causes your players to immediately harry the opposition when they turn over the ball, pressing for seven seconds before returning to their default positions.

A high Defensive Width should work well in FIFA 20 and you will likely need to change your Defensive Depth to High to push your players forward and defend nearer the half-way line. This works well in combination with your Defensive Style to try to win the ball back quickly.

However, it may be open to counter-attacks and long balls. Man City solve this problem through tactical fouls, but this is risky in both real-life and FIFA 20.

For your Offensive Style, combine the Possession setting with a High Offensive Width to give you space to pass the ball into and retain possession.

In-game, use the D-Pad to change attacking full-backs to On to push more players forward and provide even more attacking options.

Guardiola likes to have a lot of players around the box when attacking, but leave the Players in Box setting on Medium as he does not send all his attackers into the box when crossing, instead leaving some outside to mop up second balls and continue the attack.

As these tactics are so attacking-minded, it is worthwhile setting your defensive midfielder in 4-3-3 or midfielders in 4-2-3-1 to Drop Between Defenders and that will mean you at least have three players back at all times, even with Attacking full-backs turned on.

This also lets the midfielder drop deep for short passes from the goalkeeper when in possession too, helping split the centre-backs to allow better build-up and possession play.