There could be three Midlands teams in the Women's Super League next season, with the Foxes sitting at the top of the Women's Championship

When Birmingham City celebrated victory at Aston Villa earlier this season, it was an historic occasion.

The first 'Second City derby' to take place between two professional women's teams wasn’t just big for them, but for women’s football in an area that has long been in the shadows.

As the two nemeses prepare to lock horns again on Wednesday night, it serves as a reminder of what an exciting time it is for the Midlands right now.

Sarah Westwood came through the set-up at Birmingham and is now the general manager of the women’s team.

Almost 20 years have passed since she left the club as a player, with her citing the professionalism of the environment as the most important difference upon her return.

Crucially, a lot has stayed the same, too.

“The values of this football club haven’t changed from the day I walked into it, to the present day,” she explained to Goal.

“To have a club with such strong values across their entire workforce is massive and really shows why we’ve been at the top of the game for so many years.” 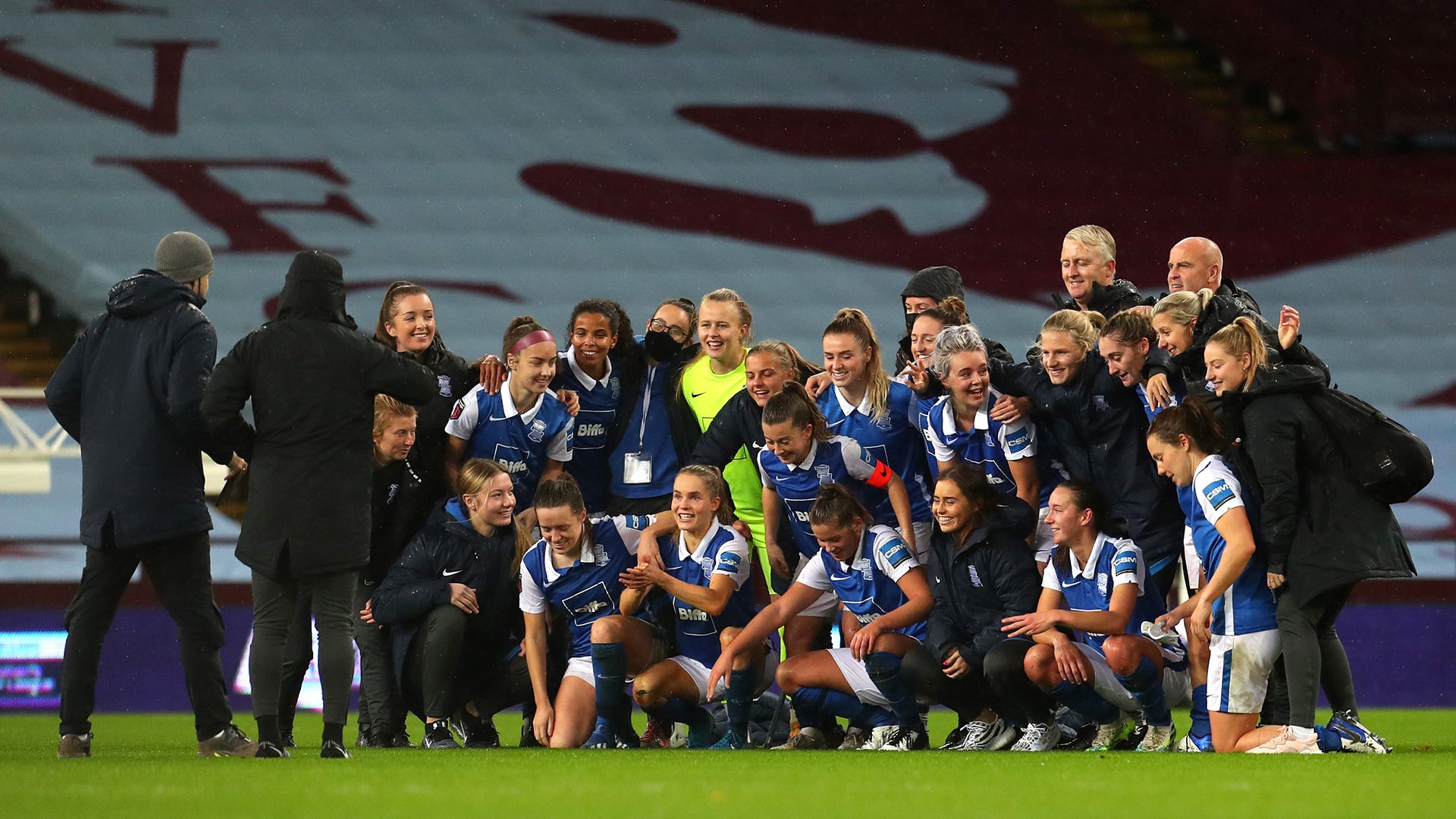 Birmingham are now in their 17th consecutive season in the top flight and have long led the way for women’s football in the Midlands.

They lifted the Women's FA Cup in 2012, reached the semi-finals of the Women's Champions League in the 2013-14 season and were the first professional women’s football team in the area.

“It’s huge,” Westwood said, describing the importance of the region having a full-time team. “Football is our national sport and to have a successful elite pathway on your doorstep for a young girl wanting to pursue a career in any area of the game is so important.”

Villa, their biggest rivals, have now joined them in providing elite football to the West Midlands. The club won promotion to the WSL last season, turning professional while still in the Women’s Championship and reaping the rewards by winning the division.

Midfielder Emma Follis is a Villa fan through and through who helped the club enjoy that successful season, scoring six goals.

It’s not her first spell with the club. Follis came through the youth ranks but left for Reading in 2015, long before things were in the positive place they are now.

“It was a really hard decision for me to make because Villa weren't really going anywhere,” she told Goal. “There wasn't much progress behind the scenes.”

When she returned in 2019, people questioned why she had dropped down to the Championship. But Follis believed in what the club were doing and was convinced of where they were going.

The support from Villa goes beyond the senior women’s team. The players that will follow Follis’ footsteps now have facilities and resources that are a world away from what the 29-year-old experienced growing up.

“[We were playing in] big baggy kits [with] coaches that were there because they just liked football but didn't really know what they were talking about,” she laughed.

“The kids here at Bodymoor Heath [Villa’s £14 million training ground] are getting all the facilities and support, physical and mental.”

The impact that having two professional women’s teams in Birmingham, and two elite pathways for young girls in the city, is huge, coinciding with the work the local FA is doing.

Participation in the female affiliated game in the region has risen by 23 per cent since the 2017-18 season. The number of Wildcats centres, which provide opportunities for girls aged 5 to 11, has also more than doubled in that time, according to figures provided by the Birmingham County FA.

On top of the four Regional Talent Clubs (RTC) in the area, there are now 14 grassroots clubs who have full female pathways too, something that has long been particularly rare.

But it's not just in the West Midlands where things are changing. Fantastic things are going on in the East Midlands, too.

Leicester City have turned professional and are top of the Championship, meaning the women’s top flight could have three Midlands clubs next season for just the second time ever.

“We always knew that [with] going full-time and [getting] investment, there comes a lot of responsibility and pressure,” Jade Morgan, Leicester’s general manager, told Goal.

“But whilst the investment has been financial and facilities, it's also giving the players and the staff a real opportunity to give this a good shot.” 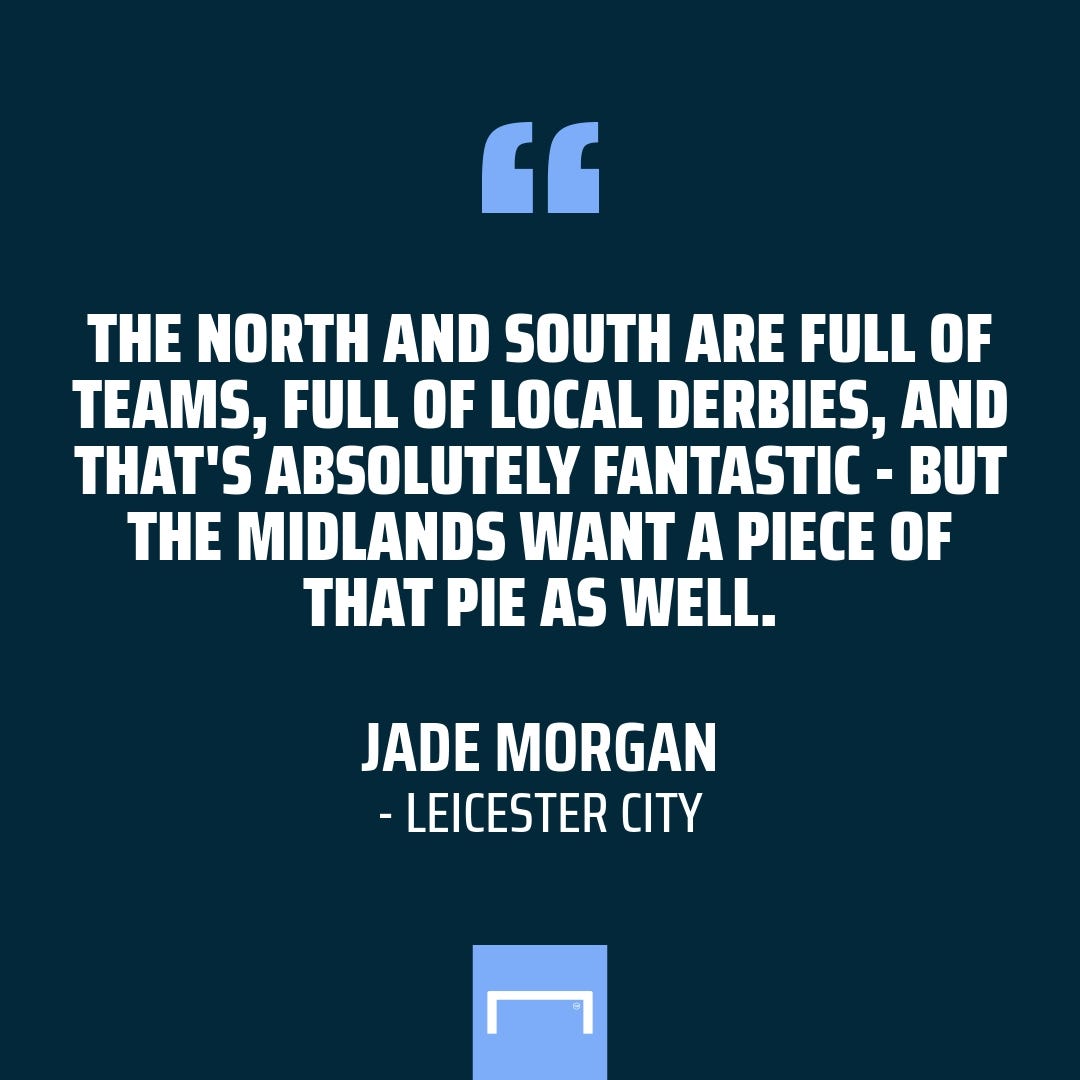 Like the clubs around them, though, Leicester are also focused on the future.

“When we did our bid [to be in the Championship] in 2018, one of our major arguments to the Football Association was that there was just no representation of a WSL or Championship team at that time in the East Midlands,” Morgan explained.

“Now, we want to surpass that and get to WSL, but it is important that within Leicester, Leicestershire and surrounding areas, players can see a tangible pathway. They can see there are steps they can take to become a professional female footballer.

“For the girls of tomorrow, those steps are in place now. Previously, they weren’t there. When girls finished in the RTC or under-16s, they were going out of the catchment area to the north or the south.

“The north and south are full of teams, full of local derbies, and that's absolutely fantastic - but the Midlands want a piece of that pie as well.”

The rise of rival clubs will offer stern competition for Birmingham – the area’s trailblazer, in a way – on the pitch. That much will be evident on Wednesday night when they take on a Villa side who recently signed a World Cup winner in Mana Iwabuchi.

But the growth of those clubs – Coventry United being another Midlands representative harbouring big ambitions in the Championship – is something to celebrate off the pitch.

“It’s an exciting time to be in women’s football in the Midlands.”