Lewes is home to just 17,000 people but it is also aiming for the top flight of English women's football

Lewes’ 2-2 draw with Liverpool this season was a perfect marker of the progress being made by an ambitious team from a tiny town of just over 17,000 people.

It’s the game that captain Rhian Cleverly picks out as her favourite, “because it just showed a bit of everything”, but on a wider scale, it was a result that highlighted just how far Lewes have come.

When Liverpool lifted their second successive Women’s Super League title in 2014, their now-Women’s Championship rivals had only just been formally integrated into the club of Lewes.

Today, the Rooks are renowned for their equality stances, being the first and only club to pay their men’s and women’s teams the same, but they are also making waves on the pitch. The women’s team are currently on track for a best-ever season – and they have their eyes on the WSL.

“It’s been a fantastic season and yet, I think we’ve underperformed,” general manager Maggie Murphy tells Goal. “That’s quite exciting.”

As well as winning as many as league games this season as they won in their first two Championship seasons combined, Lewes have taken points from Liverpool, Durham and Sheffield United, three of the league’s top four.

They are fifth ahead of this weekend’s game against recently crowned champions Leicester, looking to spoil the party and turn that stat into four out of four.

While two of those stand-out results came before Christmas, the strides made since the festive period are especially encouraging for the future. A sponsorship secured with clothing brand Lyle & Scott in the middle of a pandemic is something Murphy describes as “real validation that what we're trying to do is the right thing to do and it is the way forward”. 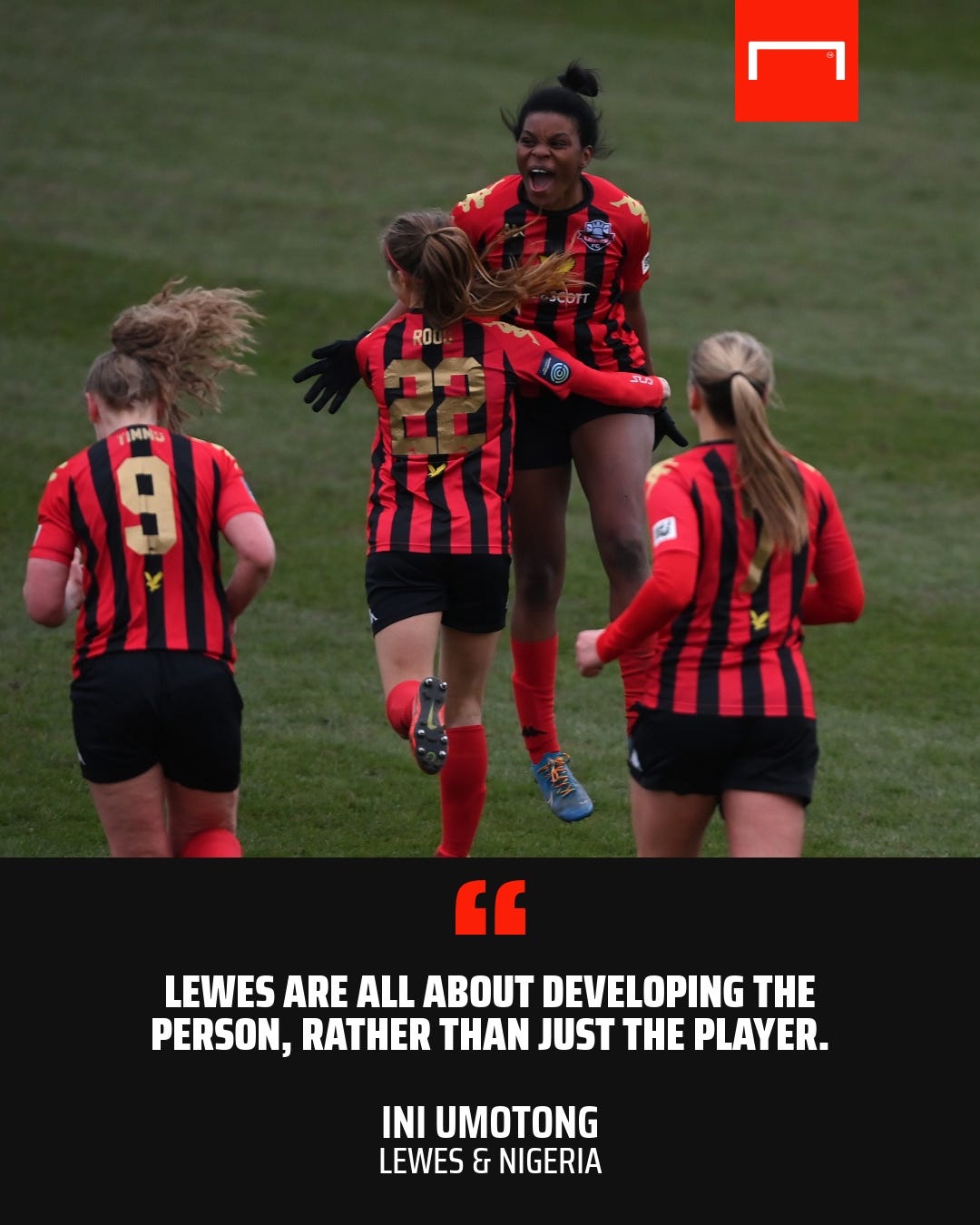 Meanwhile, the recruitment of Nigeria international forward Ini Umotong has added the attacking threat that a defensively resolute side were lacking. Her signing was captured despite plenty of interest from elsewhere, with Lewes able to offer experience behind the scenes that will benefit Umotong’s studies off the pitch.

“The feeling I got at the club, they're all about developing the person, rather than just the player,” the striker explains to Goal. “That really stuck with me. I think it's important that a club focuses on the person because the playing career isn't forever.”

She’s not the only player to have been drawn to East Sussex for such reasons. Captain Cleverly had heard what “a special place” Lewes was and was massively impressed by the lengths they went to to ensure she could study while playing.

“They did a lot. They linked me with [the University of] Chichester. They sorted all that out for me. It was very easy, which doesn’t happen often in life,” Cleverly remembers.

“Honestly, we really care about them,” Murphy adds. “We’re always trying to find ways that we can support the players and figure out what they’re wanting to do in life.”

If players are happy off the pitch, it does wonders for how they fare on it. The team environment is helping them towards the goal of promotion to the top table – and it comes from the very top of the club.

Chairman Stuart Fuller’s introduction to the club sums up what it is about. After being promised “great beer and good people”, he went down to one of the men’s team’s games in 2009. Two years later, he joined the board. “You name it, I’ve probably done it at the club,” he says.

Mid-lockdown, last summer, the men’s team were doing some pre-season sessions in a park in London, and Fuller was running into the road to retrieve stray footballs. To have a man with his sense of community at the top is telling. 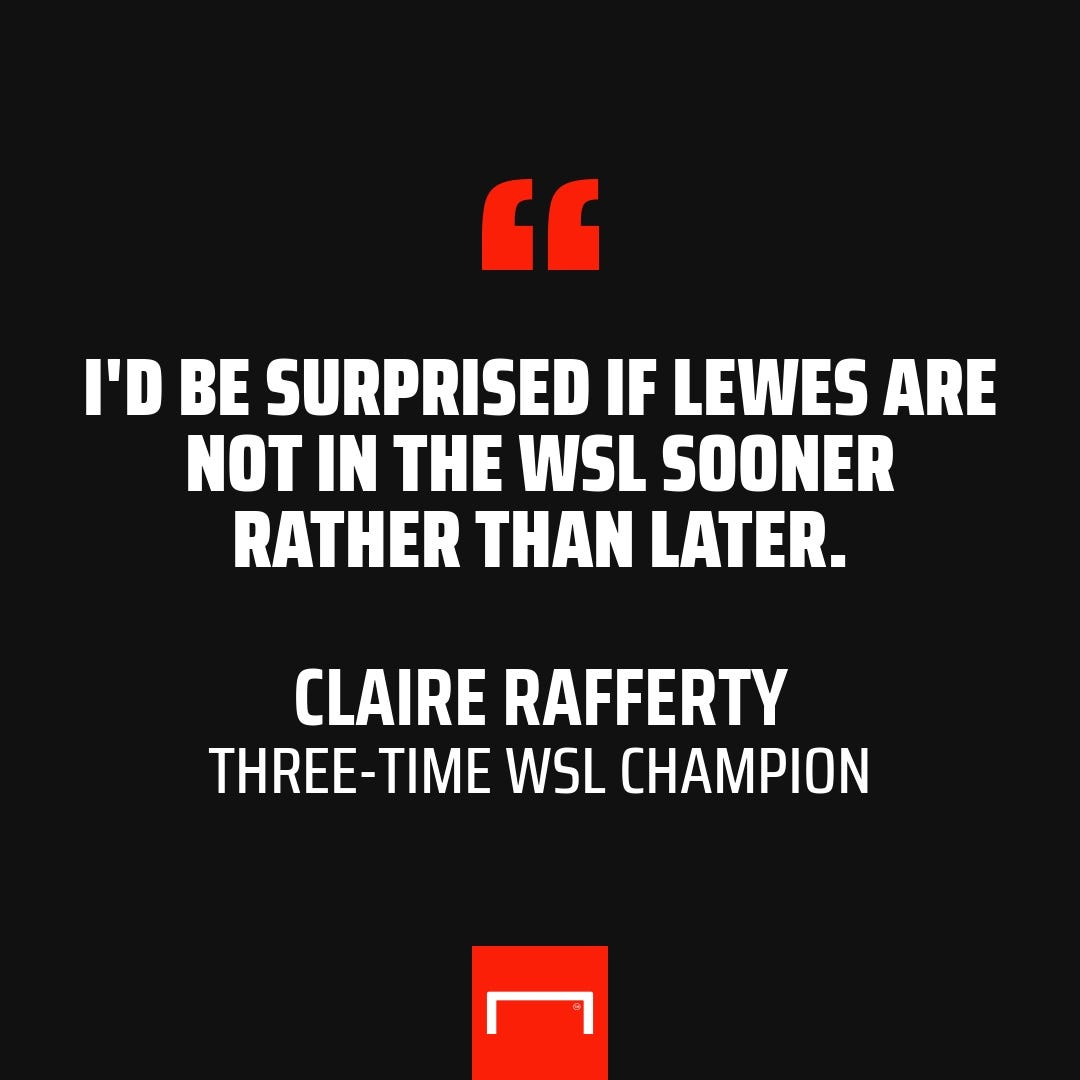 When he joined, Lewes’ aim was strictly “financial survival”. Now, while he admits the men’s team reaching the Football League may be “a step too far”, Fuller is convinced that, for the women’s side, the WSL is not.

“I certainly want to think that in the next five years we'll be in the WSL,” he explains. He reels off a flurry of improvements needed to make it happen but the ambition and ability to tick all of the boxes is there.

The deal with Lyle & Scott isn’t the only thing to confirm they’re on the right track. In late 2019, Claire Rafferty, a three-time WSL champion, joined the club as a director.

Part of a trophy-laden era at Chelsea under Emma Hayes, she knows what it takes to build success and is impressed by what she sees in the club. That she describes herself as being “quite honoured” by Lewes’ approach says it all.

“It's going the same kind of way [as Chelsea],” the former England defender says. “You have to start somewhere and the start is trying to get a training environment that replicates the matches, making sure it's competitive, making sure the players are given the best facilities to actually perform and giving them structure around their day, which suits their lifestyle.

“I'd be surprised if they're not [in the WSL] sooner rather than later, just because of the ethos and the steps they've taken. I can't see them going backwards. I can only see them moving forwards.” 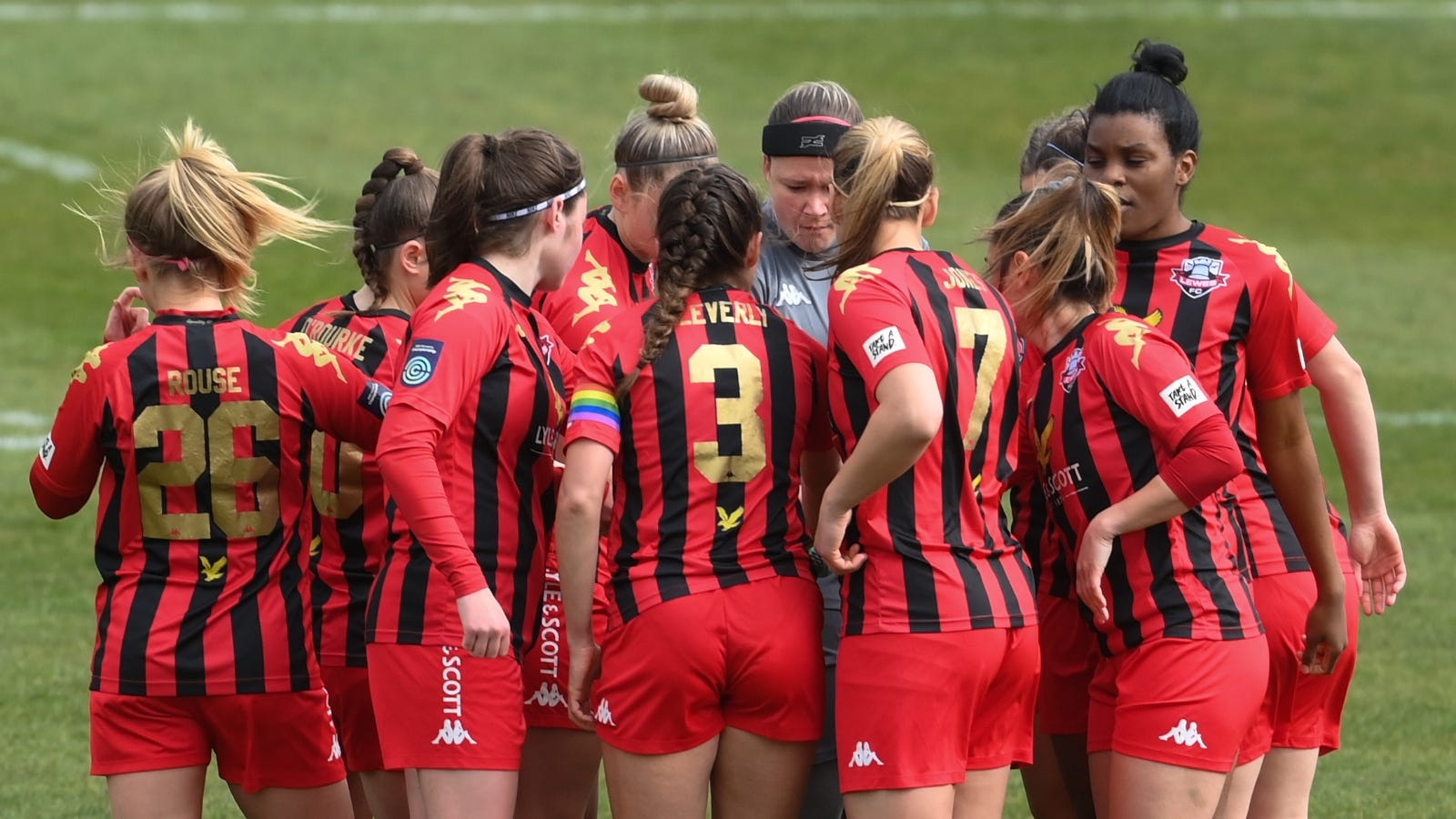 For now, the focus is on finishing the season strongly. There are just two league games left and Lewes can continue to surprise people by securing a possible fifth-placed finish.

“It's nice to be playing for the underdog because the expectation is slightly lower, but it puts more expectation on us because we're going out there to prove a point,” Umotong says. “We have the character to thrive given that underdog status, which we are doing.”

“I think that probably suits us, doesn't it?” Murphy adds. “One day when we're no longer the underdog, that's a really exciting prospect, but until that happens, we're quite happy. In fact, we were quite happy sliding up the league and not making too much noise about it."

This club may have built a renowned reputation for reasons largely off the pitch, but their plans on it are just as big. If successful, the two together could be huge.

“Sometimes it's kind of like, 'oh, Lewes, Equality FC'," Cleverly says. "But if we can start winning games and achieving things on the field, that message off the field just becomes way more powerful."