Arsenal have completed the £30 million signing of Porto midfielder Fabio Vieira, it has been confirmed.

The Portuguese midfielder had not been linked with a move to the Gunners throughout the start of the off-season, only to emerge as a surprise target for Mikel Arteta following previous links to other European giants.

Now, the 22-year-old will head to the Emirates Stadium for the next half-decade, in a deal that could well come to be viewed as a cut-price bargain buy for the north London outfit, given his potential pedigree.

What did Arsenal say about new signing?

“We’re so pleased to have completed the signing of Fabio from FC Porto. Fabio is a player with special qualities who is comfortable with the ball in the final third of the pitch," Technical Director Edu signalled to the club's official website.

Mikel Arteta added: ”I am very excited that we have identified and signed such a special talent. Fabio is a very creative player that will bring high quality and versatility to our attacking play.

"We welcome Fabio and his family to our club and are looking forward to starting work with him ahead of the new season.”

How much will Vieira cost Arsenal?

What is Vieira's Arsenal contract length?

Arsenal have confirmed that Vieira has penned a five-year deal at the Emirates Stadium, tying him down to the Gunners through until the summer of 2027.

One of the most promising young talents to come out of Portugal's well-respected youth scene in the past few years, Vieira is a midfielder preparing to burst out onto the biggest stage after showing superb domestic form.

A product of Porto's academy, he made the leap up to the senior side in 2019-20, before cementing his place over the following two years as a key performer for the club in their pursuit of domestic success.

A move to a bigger league among the European heavyweights is a natural progression - but with six goals in 27 top-flight games last term, it will be curious to see if he is able to bridge the gap successfully and deliver for the Gunners, as Arteta looks to bolster his team in the middle of the park.

What shirt number will Vieira wear?

While Fabio's namesake and Arsenal legend Patrick wore the number 4 shirt during his time in north London, the new signing will take No. 21.

That jersey has most recently been used by Lukasz Fabianski and Calum Chambers but has lay vacant since the latter's move to Aston Villa in January.

Get excited, Arsenal fans - Vieira can thrive in north London

The signing of Fabio Vieira throws up many intriguing questions at Arsenal.

Where does the Portuguese playmaker fit in? Will he start? What does Mikel Arteta believe is his best position?

Those questions won’t really be answered until the transfer window shuts and the new season is well under way. But one thing that is for certain is that Arsenal fans should be very excited about the capture of the 22-year-old.

Vieira will bring more creativity to a squad that is not overly blessed with creative talents and will provide Arteta with several new options across the midfield thanks to his ability to operate in a multitude of positions.

He can play as a No.8, a No.10 or either side of the attack. He has even operated as a false nine at times. So he will bring more flexibility to the squad, as well as technical ability and an exceptional eye for a pass which saw him contribute 14 league assists during Porto’s 2021-22 title-winning campaign.

Whether Vieira will be a guaranteed starter next season remains to be seen. How Arsenal’s ongoing chase of Youri Tielemans unfolds may ultimately decide that.

However, GOAL confirmed recently that the club's interest in the Belgium international has been put on ice despite holding talks over a possible summer move.

But there’s no doubt that the Gunners have an immensely talented new player on their hands. Arteta demanded quality this summer and the capture of Vieira is a very promising start.

Where will Fabio Vieira play for Arsenal?

Vieira is capable of operating as a No.8 or a No.10, so could fill a variety of roles for Arsenal.

As the Gunners favour a 4-3-3 system, it is likely that he will - if thrown straight in as a starter - operate alongside Thomas Partey and Martin Odegaard in Arteta's engine room. 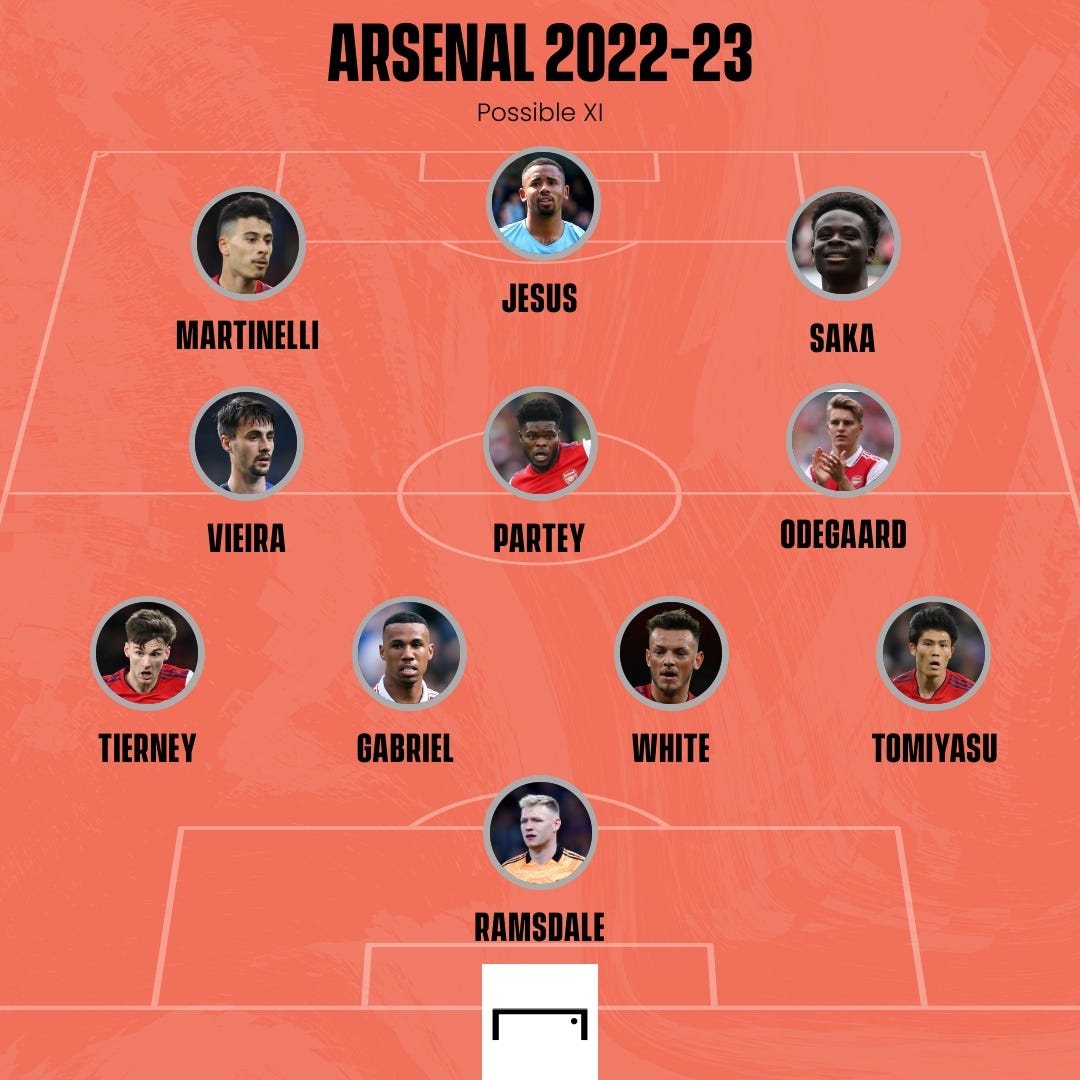 There is a possiblity that he starts the season on the bench, however, with Granit Xhaka and perhaps Tielemans, if Arsenal reignite their interest in landing him from Leicester City, battling for midfield roles.

Who will be Arsenal's next summer signing?

With Vieira through the door now, the Gunners are continuing to make waves in the transfer market, having already snapped up Brazilian teenager Marquinhos and USMNT goalkeeper Matt Turner.

Their long-mooted chase of Manchester City striker Gabriel Jesus may also be about to end, with Arsenal having accelerated talks over a move for the Brazil international in recent days. The attacker's agents travelled to England in an attempt to get an agreement over the line as negotiations reached a critical stage.

Victor Osimhen, meanwhile, remains in Arsenal's crosshairs as a top target, with the Napoli star refusing to rule out a Premier League switch during the summer window.