By Ben Hayward
The former Real Madrid striker looks to bow out with a title in his final appearance on a football field this Sunday. But whether he does or not, his legacy will be long lasting.
He is the champion of the Champions. Raul Gonzalez Blanco’s story will forever be linked with that of Europe’s premier club competition; he may no longer be the tournament’s top scorer - having been overtaken by Barcelona's Lionel Messi and former Real Madrid teammate Cristiano Ronaldo - but he remains synonymous with the continent's top tournament.

On Sunday, Raul brings down the curtain on a spectacular playing career and he can do so by adding another trophy to his collection: a NASL title with New York Cosmos if they can beat Ottawa Fury FC. It would be the 22nd piece of silverware since his debut in 1994 and a fitting end for a modern-day icon.

Those titles don't include Spain's successes in recent years. Raul captained his country for several years, but the late Luis Aragones made a decision with his job on the line. There would be a new style for La Roja - and the striker was left out in the cold. Confronted by furious fans pushing for Raul's reinstatement, Aragones stood firm. "Do you know how many World Cups Raul has been to?” Aragones answered, in earshot of a television camera. "Three. How many European Championships? Two. And how many World Cups have we won with Raul? None."

Without him, Spain won Euro 2008 and even though he returned to form for Real, he would never be back for La Roja. He did score 44 goals in 102 games for the national team, though, and is second behind only David Villa (who also inherited his number 7 shirt) in the country's list of all-time international scorers.

Instead, he will remembered for Madrid's modern successes in Europe especially. Indeed, former Real teammate Christoph Metzelder once described Raul as "Mr. Champions League." And even though he is no longer the tournament's top scorer, nor has he won it as many times as Messi for example, he has influenced Europe's elite competition like few others.

Since breaking onto the scene as a precocious 17-year-old, Raul has perhaps achieved more than he should have: he was never especially quick, doesn’t have a powerful shot, is not a big aerial presence, nor is he blessed with wonderful technical ability. But in his head, he is quicker than anyone else, allowing him to react faster than his opponents, attract the ball like a magnet, fool rival defenders and move to exactly where he needs to be. "Raul is the best in everything," former teammate Santiago Solari once commented. "Without being the best at anything." 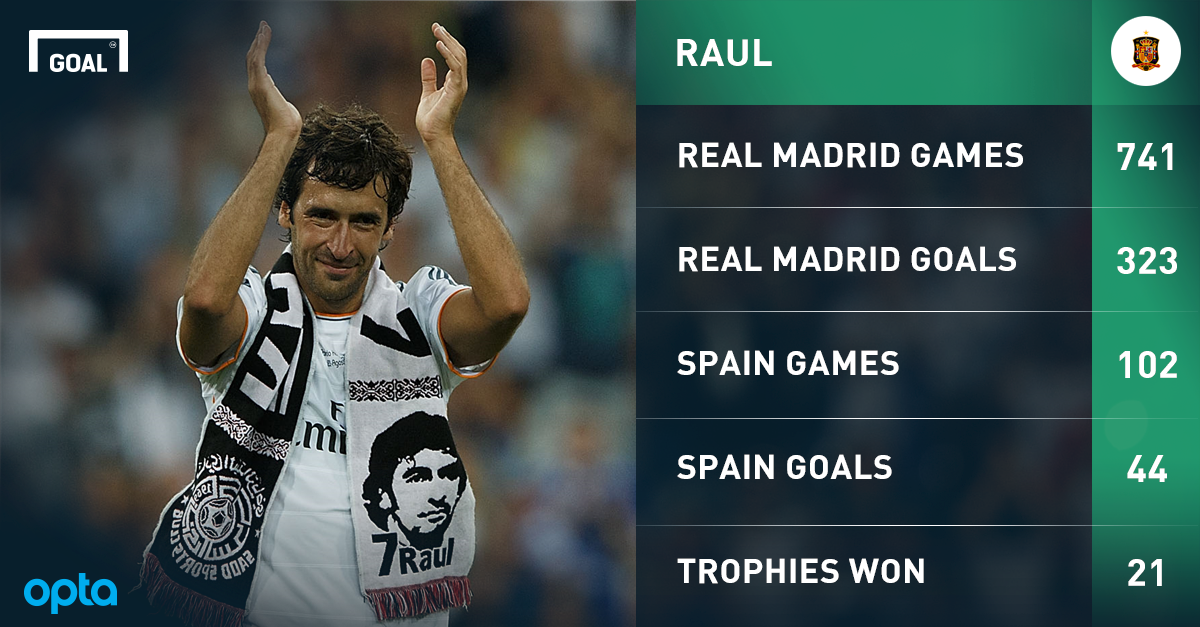 And he scores goals; lots of goals, all types of goals: brilliant goals, simple goals, team goals, individual goals. Tap-ins and tapestries; a little bit of everything – like tapas. But they all count and for some time they made him the Champions League’s leading scorer with 71 goals in 144 appearances, which is no mean feat for a player often described by Madrid haters and even some blinkered Real fans as el que no hace nada nunca – he who never does anything.

But there’s also mental toughness and cerebro – and there’s preparation, too. Dedication, dedication, dedication; Raul emerged as a teenager at Madrid and his immediate brilliance forced Emilio Butragueno – one of Spain’s greatest ever players – into an early retirement. And over the years, as age, injuries and the sheer number of matches he has been forced to play have taken their toll, Raul always managed to stay ahead of the game, using many techniques to keep fit, in shape and sharp; he was one of the first players to take ice baths and also slept in an hypoxic chamber during his final years at Madrid in order to stay fitter and fresher than the rest.

"He’s a person that a lot of people should look up to because he is very dedicated to what he does and what he believes in," David Beckham said upon leaving Madrid. Such dedication and commitment have brought not only big results for Raul, but also big rewards. And many of these have come in the Champions League.

Raul made his first Champions League appearance in a 1-0 defeat away to Ajax, but his home debut was spectacular: a hat-trick in a 6-1 thrashing of Ferencvaros. He also scored a leveler in Hungary, bagged the first in a 2-0 success at home to Grasshoppers and netted the only goal of the game in a memorable quarterfinal win at Juventus. The Italians won the second match 2-0, however, to knock out Madrid and the club failed to qualify for the Champions League the following season.

But Madrid was back – along with Raul – in 1997. And how! Raul scored twice in the group stages, but was a key component in the side which went on to win its first European Cup since 1966. Raul played 90 minutes in the final and was replaced right at the end by Jose Amavisca. It was the start of something special for player and club.

After a shock quarterfinal exit to Dynamo Kiev in 1998-99, Raul helped his side avenge its elimination at the hands of the Ukrainian side in the previous edition by lashing home a brilliant lofted drive from 25 yards to secure a 2-1 win away from home. Further goals arrived in the wins home and away to Rosenborg, and a 4-2 success against Bayern Munich at the Bernabeu. 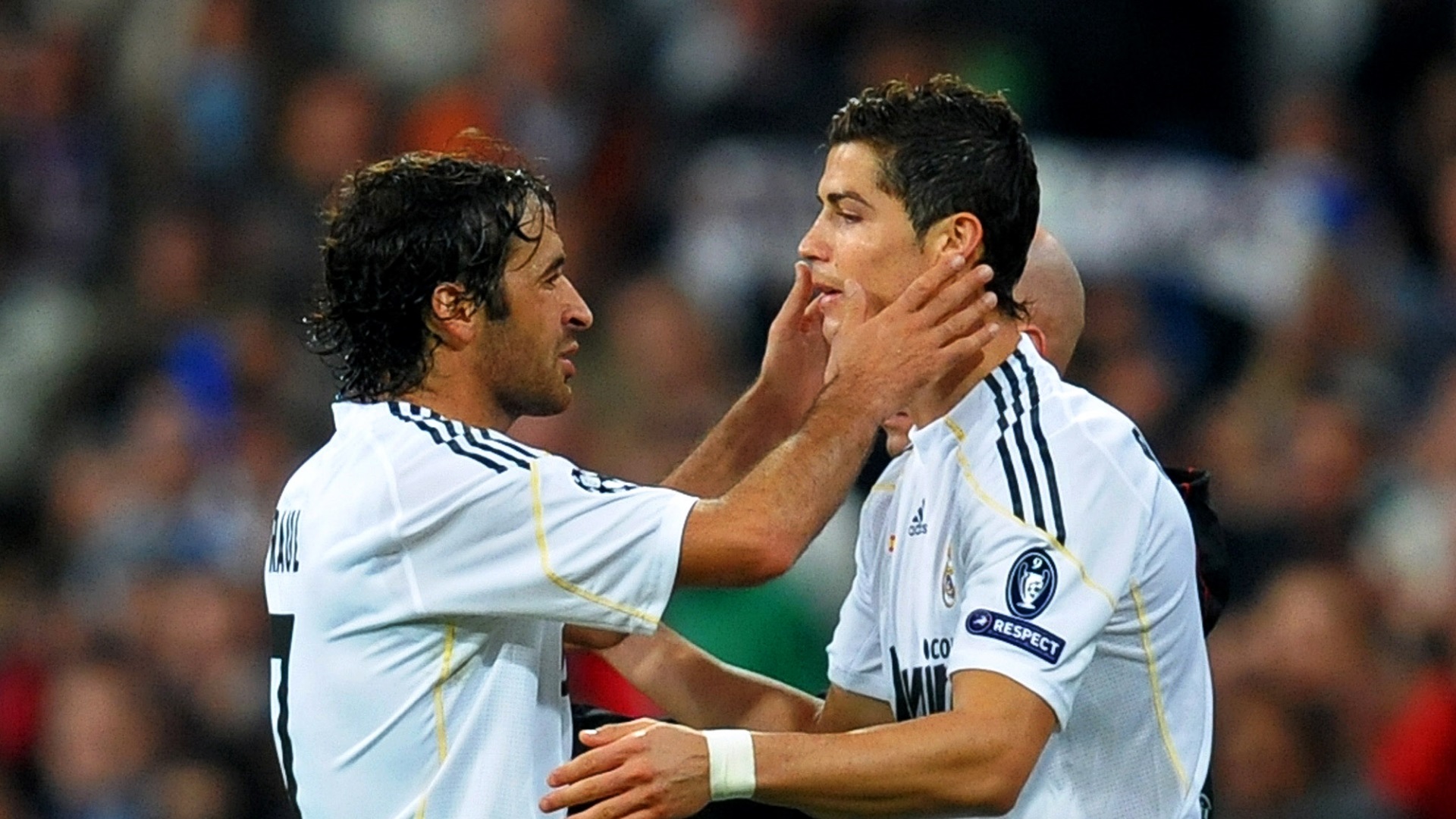 But the best was yet to come: two memorable strikes against Manchester United which sum up the striker’s game to a tee. The first saw Raul pick up the ball some 40 yards from goal on a quick counterattack, advance into the area, sidestep Mikael Silvestre and curl an inch-perfect left-footed drive into the corner, while the second was all about his movement – and all about Fernando Redondo. In one of Old Trafford’s most famous goals scored by a visiting team, the Argentine beat Henning Berg with a stunning back-heel flick in the corner and squared for Raul – in the right place at the right time – to tap home. "Real buy these big players like [Luis] Figo, [Zinedine] Zidane and Ronaldo, but I think the best player in the world is Raul," United manager Sir Alex Ferguson said some years later. And he has experienced it at first hand.

Raul then rounded off a glorious campaign as he scored the third in his side’s 3-0 final win over Valencia, racing clear from his own half and keeping his cool to round Santiago Canizares and slot the ball in from an angle and wide of the backtracking Miroslav Djukic. Cool, calm, and collected.

The Spanish striker was then on target again as Madrid claimed La Novena - a ninth European Cup. In the 2-1 win over Bayer Leverkusen, he opened the scoring by racing onto a long Roberto Carlos throw-in and beating German goalkeeper Hans-Jorg Butt with an opportunistic finish. It was another highlight - and another trophy.

Raul was on target nine times as Madrid advanced to the semifinals the following year. Many of those goals were spectacular too, notably the double he scored in the 3-1 win against Manchester United – when he lashed a low shot into the corner from 25 yards and added a second with a great turn and clinical finish – and one of his two in the 3-1 victory over AC Milan – when he fooled two defenders and thumped an unstoppable right-footed effort into the roof of the net from outside the box. "Raul is a Ferrari," Fernando Hierro, his predecessor as captain of Real and Spain, famously commented. 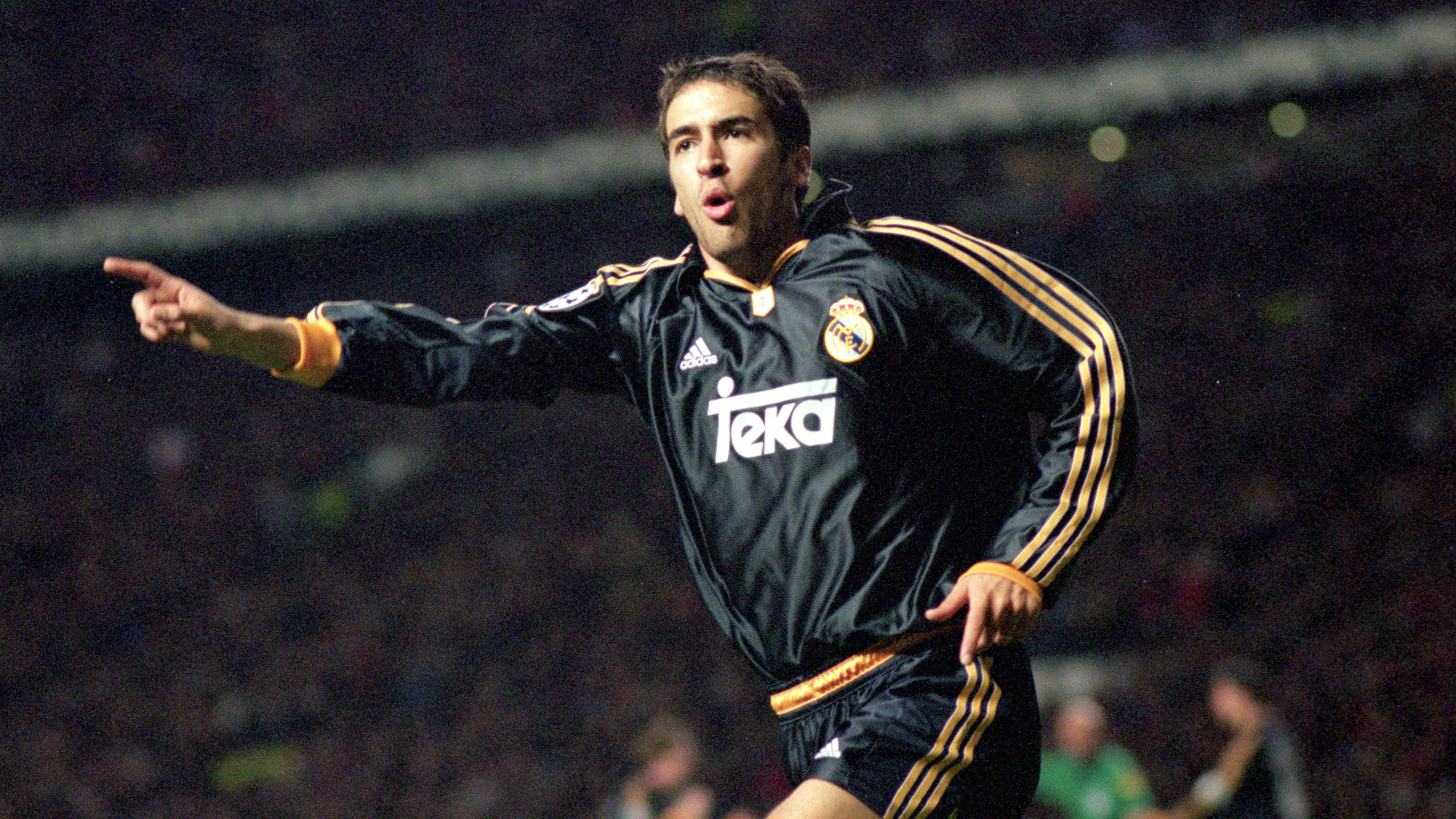 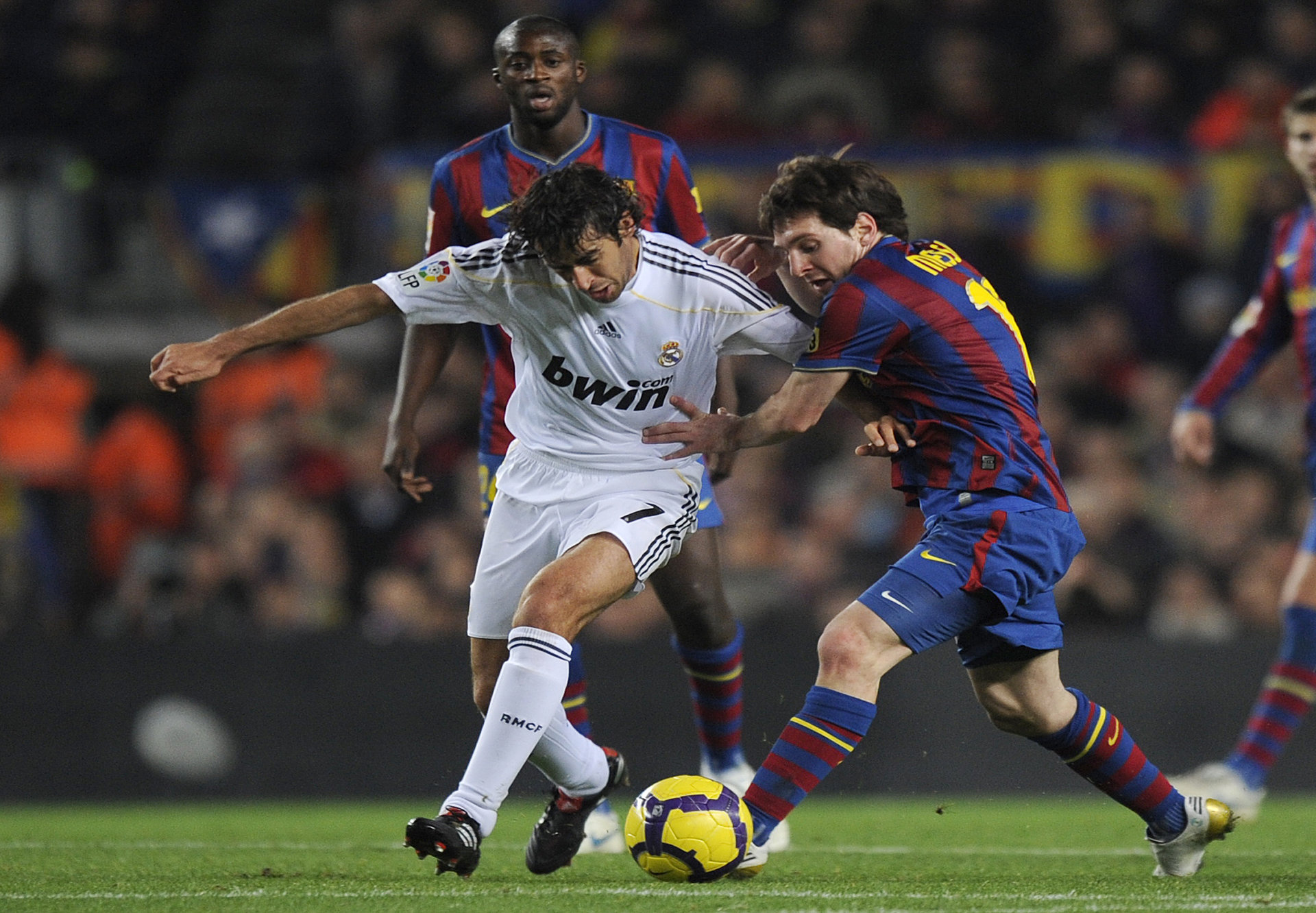 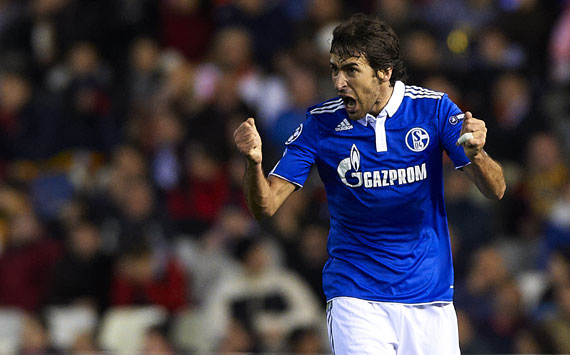 Subsequent seasons were less impressive as Madrid failed to progress to the latter stages, but the goals continued to flow for Raul and he became the first player to reach 50 Champions League strikes when he netted in a 2–1 group stage win over Olympiacos in 2005.

However, the striker perhaps didn’t enjoy the recognition he merited due to his unassuming personality and scandal-free public life. "I think he is the greatest player to have ever played the game. He walks on the turf and astounds. It is utterly amazing," said former Real teammate Figo, while Italy forward Francesco Totti believes Raul deserved to claim football’s top individual gong. "It’s a scandal that Raul has never won the Golden Ball," he complained. Most in Spain believe that 2001, when he came second behind Liverpool's Michael Owen (who would later become a teammate at Real), should have been his year.

Raul ultimately left Madrid in 2010 to join Schalke. In search of a new challenge after some trying times in his final few seasons at Real, he was welcomed in open arms by the German side and helped them to the semifinals of his favorite competition, the Champions League. Against all odds. He also added two titles to his cabinet during his time in Gelsenkirchen.

Often described by close friend, ex-international colleague and former Barca boss Pep Guardiola as "the best player Spain has ever had", the 38-year-old has received a number of tributes this week as he prepares for his finale on Sunday. And perhaps the biggest - and most surprising - praise of all came from Cristiano. "To me," the Portuguese said in a video message. "You were the best."

Ronaldo, Ferguson, Figo and countless others can't all be wrong. So even though his goalscoring records may have been beaten, Raul's legacy will live on. On Sunday, a legend leaves the pitch for the final time - and football will be a poorer place without him.