By Ben Hayward
The Blaugrana boss tried out a fresh gameplan as he prepares for a Clasico clash without Lionel Messi - but the other two South American forwards showed they may not need one.
Bigger tests await for Barcelona. Barring a disaster on Wednesday night, the European champion was always likely to beat BATE Borisov at Camp Nou in the Champions League. So coach Luis Enrique used the match to try out something different as the club prepares for the Clasico with Lionel Messi still sidelined.

Messi is stepping up his recovery from a knee ligament injury suffered in the Liga game against Las Palmas in late September, but his presence in the Clasico clash on Nov. 21 is anything but guaranteed and, fearing he may miss the trip to the Santiago Bernabeu, Luis Enrique experimented in this match.

Barca began with Sergi Roberto in an advanced role alongside Neymar and Luis Suarez, something he had tried for 15 minutes in the weekend win at Getafe. But the Asturian coach was soon forced to abandon the plan as Ivan Rakitic limped off with an injury after 20 minutes and Barca reverted to type with the more orthodox forward Munir El Haddadi coming on to line up with the two South Americans.

Munir has not scored for Barca's first team in over a year, but he did win the penalty which saw Neymar put Barcelona in front. Then, on the hour mark, the Brazilian set up Suarez for Barca's second. The Uruguayan still had a lot to do, but beat his marker in sumptous style before poking home a low finish with his a two punt. And late in the game, Suarez returned the favor by setting up Neymar for Barca's third. 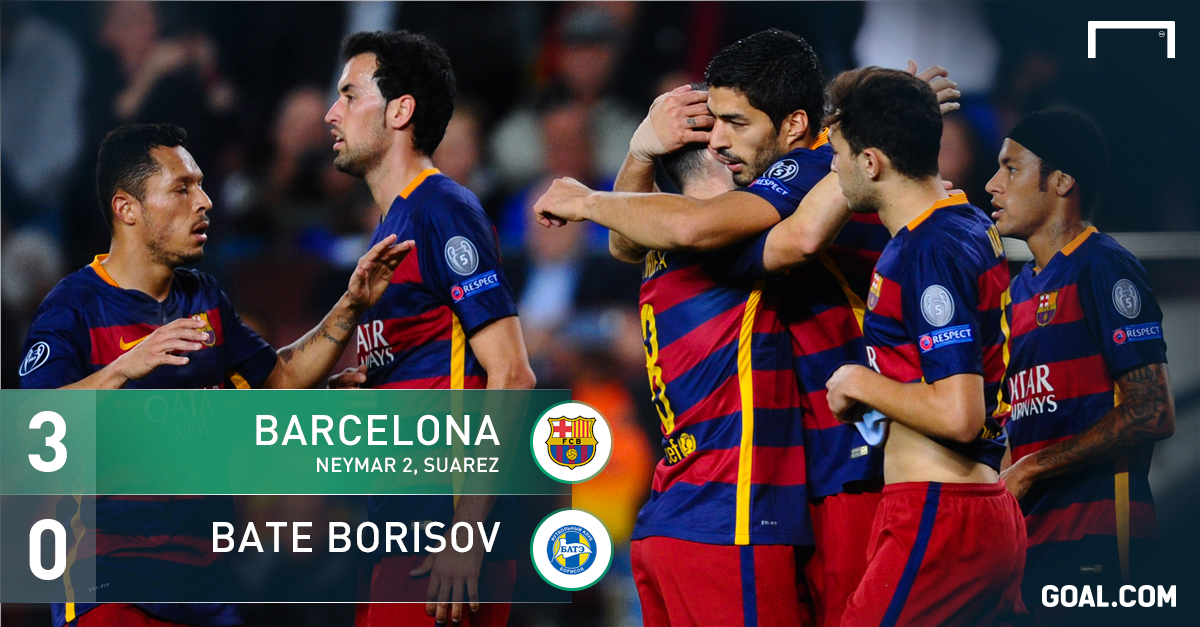 "I play where the coach picks me," Sergi Roberto said afterwards. "i'm just trying to take advantage of the minutes I am getting."

He has. The 23-year-old has been a revelation in 2015-16 and his impressive performances have come in three different positions: right back, midfield and as a winger. That makes it all the more impressive and the homegrown talent is now closing in on a Spain call up. He looks like a certaintly to feature in the Clasico as well.

However much Luis Enrique experiments, though, it is Neymar and Suarez who represent Barca's best chance of success at the Bernabeu if Messi is indeed missing.

"Am I worried about the Clasico? The only game I have in my head is Villarreal on Sunday," Luis Enrique said afterwards. 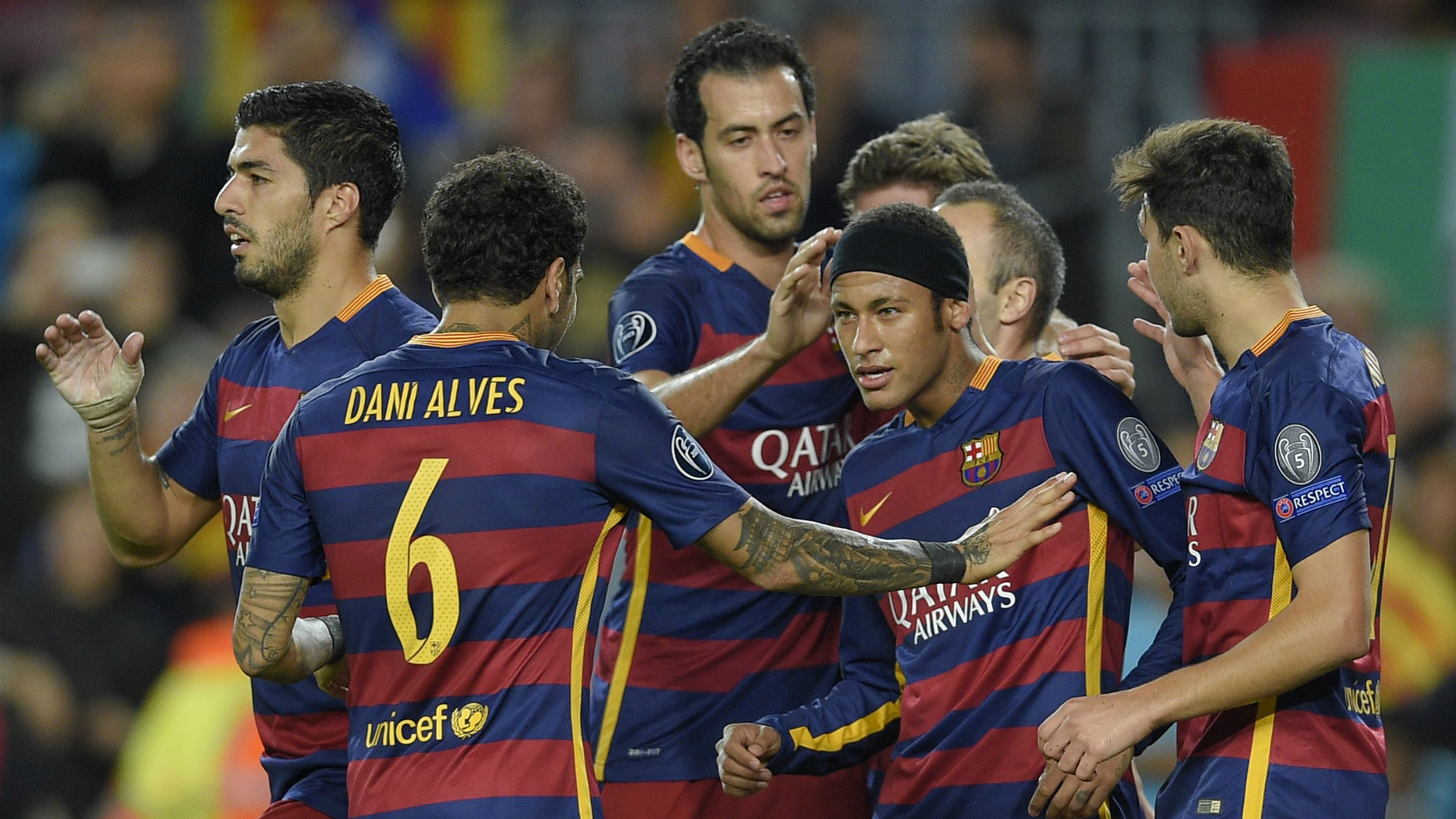 FULL STORY | Barca qualify for last 16 by beating BATE
"I'm happy with what I saw," he added. "Sergio [Busquets] played a perfect match, he couldn't have been better. He was spectacular."

On Messi's absence, he said: "Results have been good and we're doing well. We'll always miss Messi, but Iniesta is back and Neymar is in a great moment. There are positives."

So too is Suarez. The two South American forwards have carried Barca with the Argentine attacker out and Barca will hope for more of the same in the Clasico if Messi is unable to return in time for the Bernabeu encounter.

"I'm in a great moment," Neymar said after the game. "Last season was the best of my career and I have kicked on from there. It's easier when you play with the best players in the world." 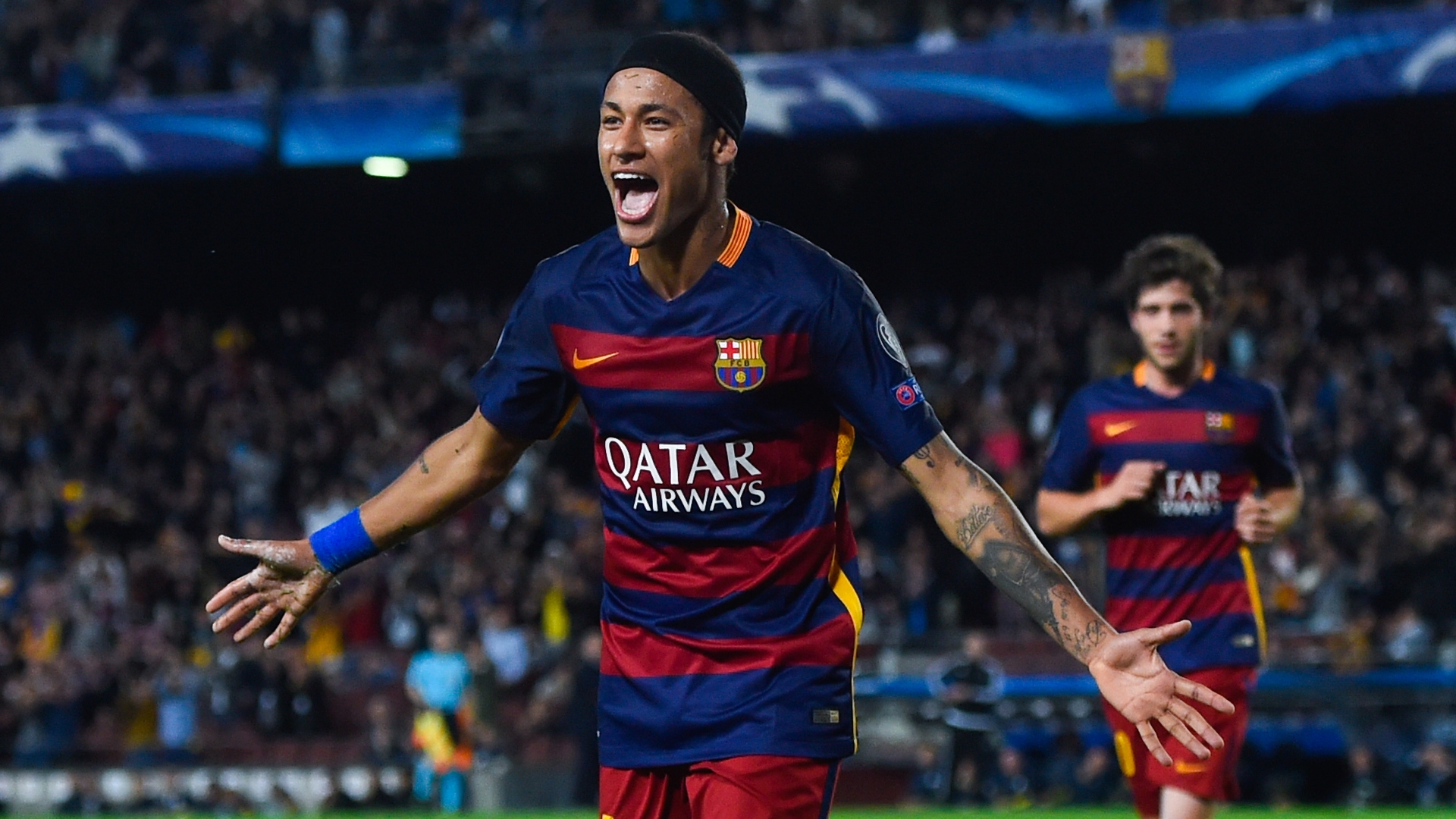 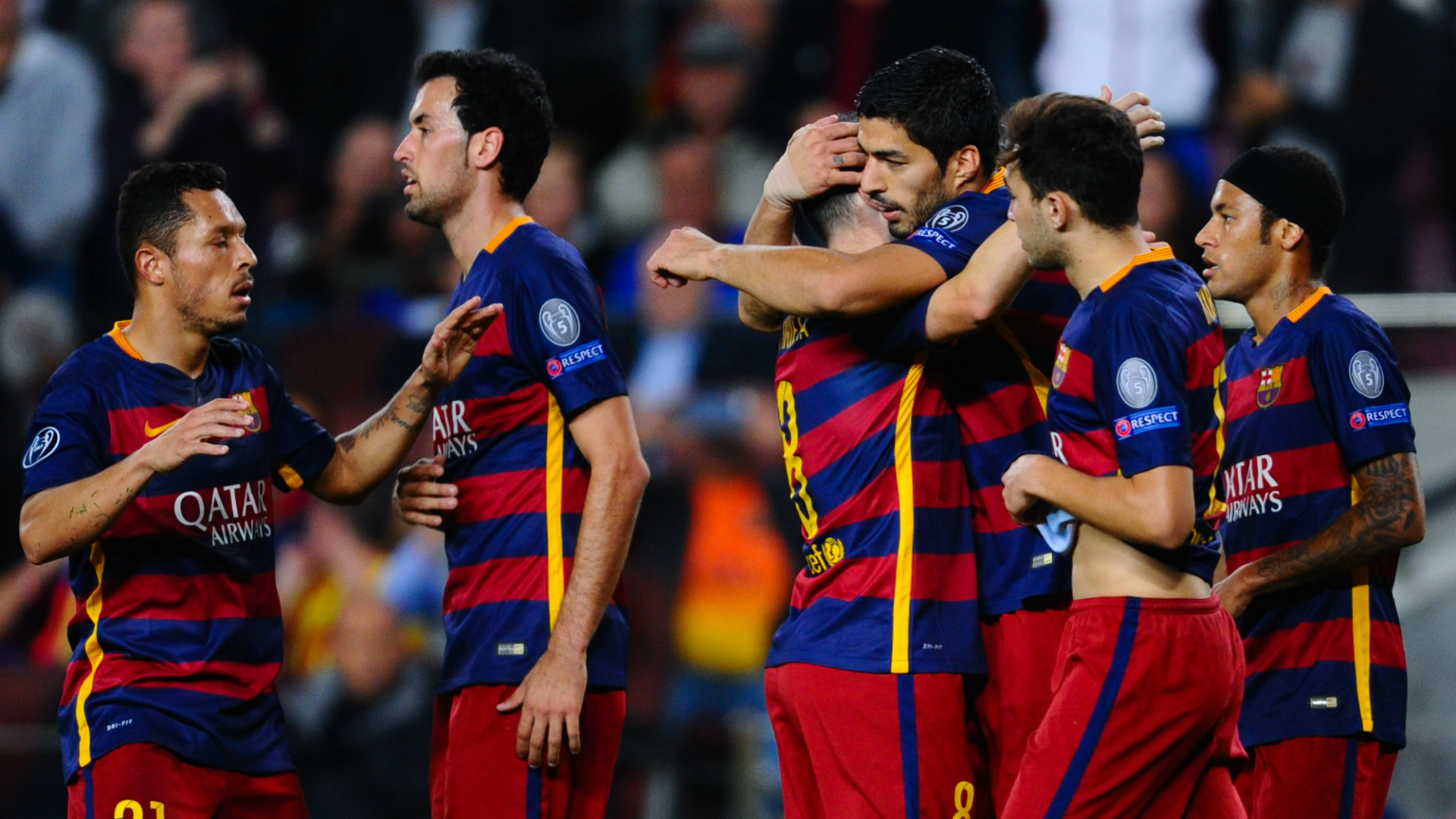 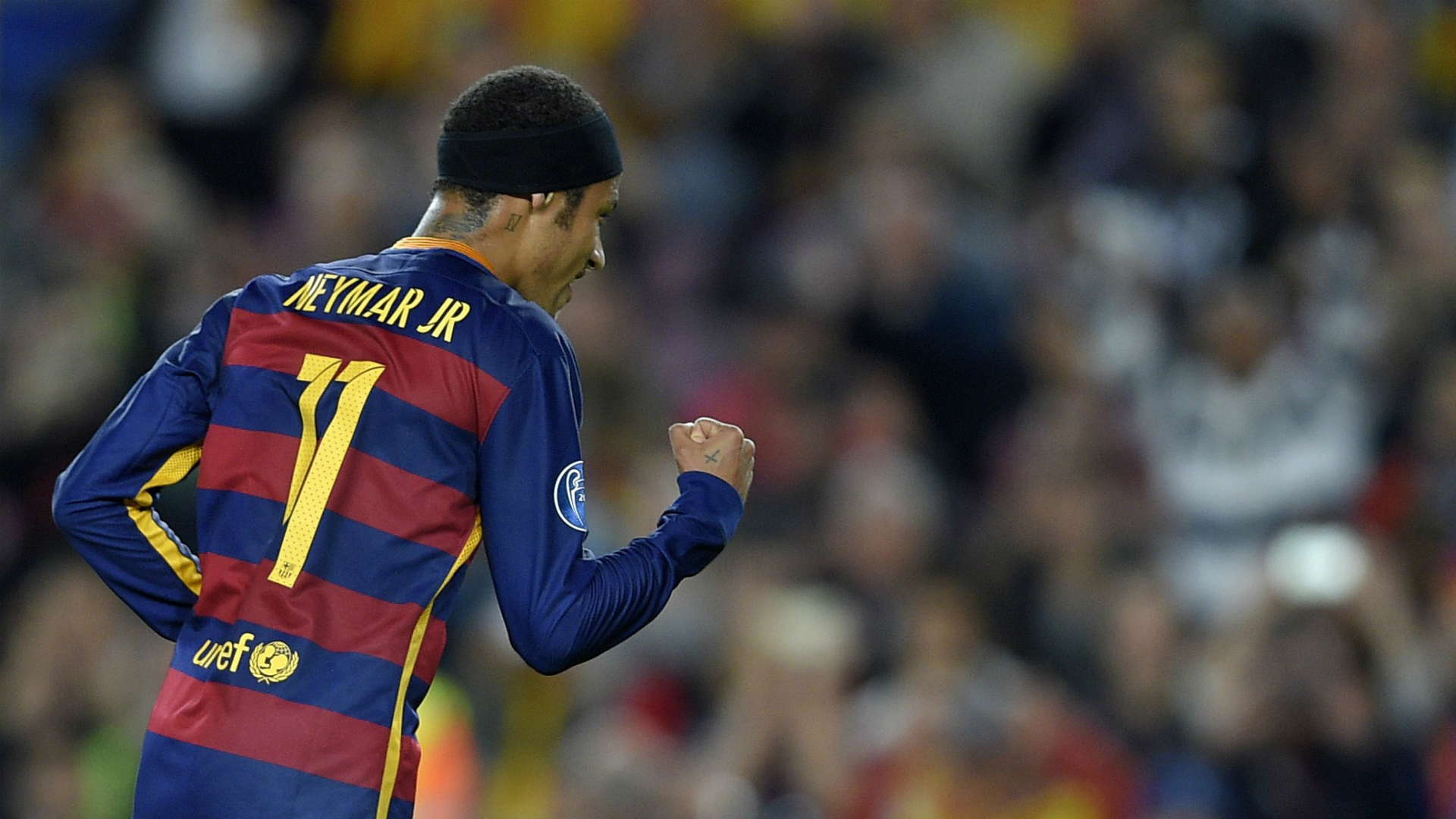 And on the third goal, he added: "I did a great sprint for it, but the goal was all about Suarez. He is a great player who is in great form at the moment."

Since Messi's injury, Neymar and Suarez have led the Catalans to six wins in their eight games, with neither involved in the goalless game at Villanovense in the Copa del Rey and the 2-1 loss at Sevilla the only blemish in that time.

So while Luis Enrique may have more tactical tweaks and experiments up his sleeve for the game against fierce rival Real later this month, Barca's best hopes of victory at the Bernabeu rest, as they have in all their games recently, on the other two members of the MSN trident: Suarez and Neymar.
Close