Carlo Garganese
The Arsenal manager has been derided in recent years for his tactical naivety, but his Manchester United counterpart is stuck even further in the past

“Eight years without silverware, that's failure. He's a specialist in failure. If I do that at Chelsea, eight years, I leave and don't come back."

Amidst one of football’s bitterest managerial rivalries, Jose Mourinho has taken particular pleasure in highlighting just how appalling Arsene Wenger’s trophy drought is.

Forget form - why Man Utd is the favorite against Arsenal

Indeed, Mourinho was absolutely right in 2014 when he delivered that most vicious put-down – and he is still right today ahead of Saturday's big Premier League clash at Old Trafford between Manchester United and Arsenal. It is absolute madness that a club the size of Arsenal still employs a manager who has consistently failed for so long.

It is now 12-and-a-half years since Wenger won the Premier League – it would take a brave man to bet against the trend continuing this term – while the Frenchman’s Champions League record is utterly embarrassing. Arsenal have been knocked out of the European Cup at the last-16 stage for six successive seasons, and have won just eight knockout ties in the competition in total since Wenger took over 20 years ago.

There can be no denying that the main reason Wenger has struggled so much in the major competitions over the last decade is because he is tactically outdated.

His preoccupation with playing football 'the right way' has not been conducive to success. In an age where technology, video and data analysis make it much easier to study opponents, Wenger’s weaknesses can be identified and ruthlessly exposed.

Teams today need to be tactically flexible and contain technical, physical and mental elements. Arsenal has lacked the last two qualities ever since Patrick Vieira, Sol Campbell and the last remnants of George Graham’s great back four either departed or retired.

For most of his reign, Wenger has been stubbornly one-dimensional and has steadfastly refused to change his philosophy – both before and during games – to counter the style of an adversary. His teams have almost always played open, attacking, expansive football, making it very easy for top coaches to outmanoeuvre the Frenchman. 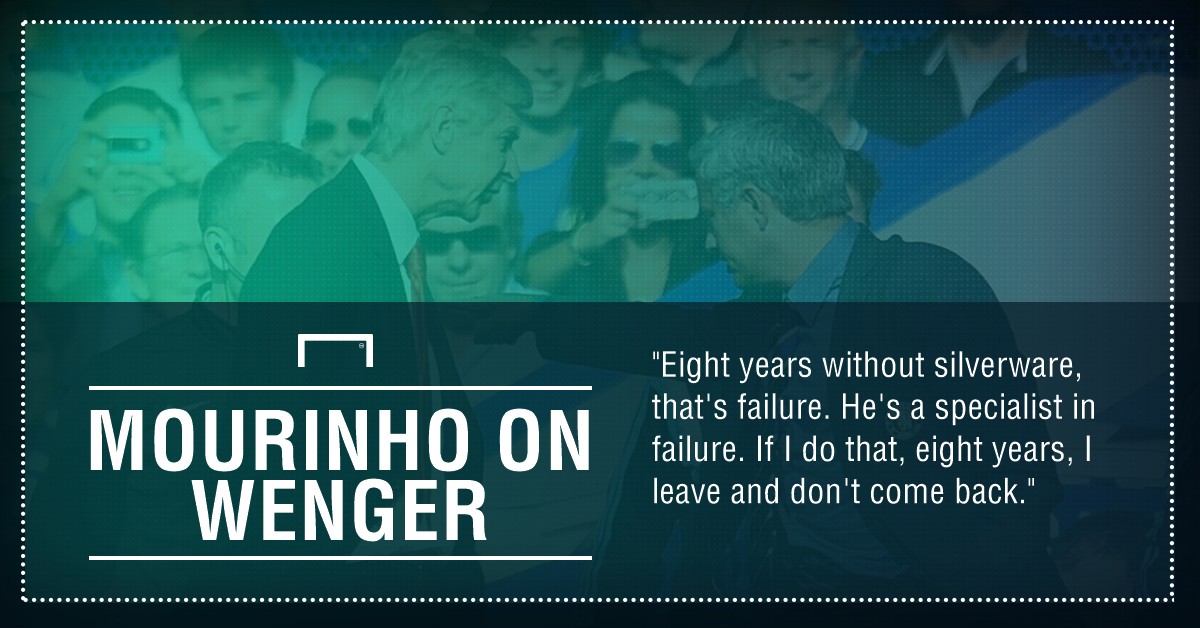 Only one season, in 2005-06, did Wenger truly abandon his principles. It’s no coincidence that, fielding a conservative 4-5-1 with Thierry Henry as the lone frontman, Arsenal made it all the way to the Champions League final. They defeated the Madrid Galacticos and a Juventus team that contained seven of the 2006 World Cup finalists on the way to a heart-breaking late defeat to Barcelona in Paris.

There have been signs over the last 18 months, though, that Wenger is sometimes willing to surrender his obsession with possession and utilise a more modern or counter-attacking game – sitting the defensive line deeper before launching a total press in midfield and transitioning via the pace of Alexis Sanchez, Alex Iwobi and Theo Walcott. The wins last year over Manchester City and Bayern Munich (with just 30% possession) are good examples of this tactic bearing fruit.

Whether this mini-awakening will be enough for Wenger to win the Premier League again or go deep in the Champions League is doubtful given the other shortcomings, but it does at least show that the Frenchman is not completely immovable in his outlook.

Which is more than can be said about his great adversary. For if Wenger is outdated, then right now Mourinho is a tactical dinosaur.

Since taking over Real Madrid in 2010, Mourinho has not evolved at all in a strategic sense. During his three years at the Santiago Bernabeu, his second spell at Chelsea and since joining Manchester United, he has almost always deployed his favoured 4-2-3-1 formation.

However, this is a system that - despite emerging as the most popular and innovative formation of the new millennium – is now out of fashion among the continental elite. None of Barcelona, Real Madrid, Atletico Madrid, Bayern Munich, Paris Saint-Germain or Juventus use it. Mourinho’s permanent successor at Chelsea quickly abandoned it in favor of a 3-4-3 that has yielded five straight wins with 16 goals scored and none conceded.

Pep Guardiola’s formation at Manchester City, a 4-1-4-1 on paper, is virtually impossible to decipher in reality. To the Catalan, there is no such thing as a set formation, it is all about pressing and interpreting space depending on the scenario and where the ball and opponents are. Then it is about exploiting this space by creating ‘passing lanes’ to provide multiple channels of attack in each move. "Organised chaos" is how his tactics were brilliantly described to Goal by Darmstadt defender Luca Caldirola after Pep’s Bayern played 99 straight games under him with a different starting XI.

Wenger also still employs an outdated 4-2-3-1 system but his team is far less rigid and predictable than Mourinho’s Manchester United, whose players rarely leave their set positions. Compare the effortless interchange in attack of the likes of Alexis, Iwobi and Mesut Ozil to the static and set Zlatan Ibrahimovic. While Wenger’s offensive play is fluid and imaginative, Mourinho’s provides clear reference points for defenders. A big hulking target man like Zlatan or Didier Drogba has been a favourite of Mourinho for most of his career, but this type of physical striker may also be going out of fashion. 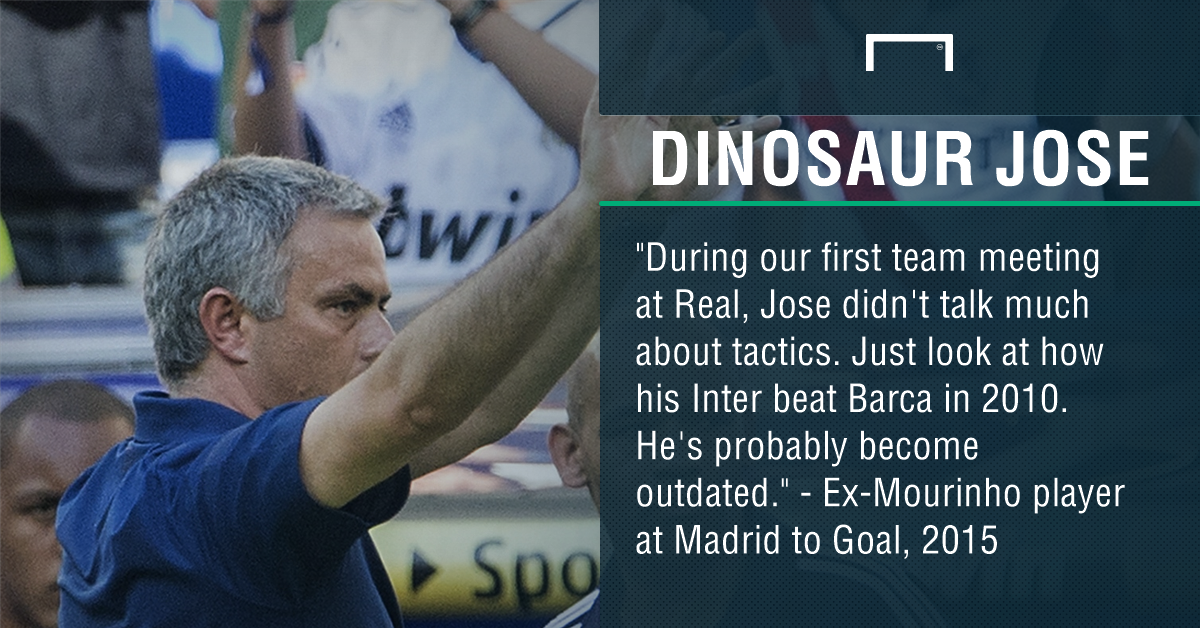 Barcelona employs a trio of small, skilful, switching forwards. Manchester City has the pint-sized Sergio Aguero, Raheem Sterling and David Silva buzzing around. Juventus and Atletico are building their two-man attacks around the tiny but incredibly talented Paulo Dybala and Antoine Griezmann, respectively. The Mourinho lone striker is dying.

The best tacticians are also wise enough to adapt their formation to the players they have available, just like Conte did at Juventus when he ditched his favoured 4-2-4 for a 3-5-2 that made use of the brilliant BBC backline of Andrea Barzagli, Leonardo Bonucci and Giorgio Chiellini. He is now doing the same at Chelsea, with David Luiz reaping the rewards in the sweeper role.

Mourinho is persisting with a 4-2-3-1 system at United that is clearly incompatible tactically with his team’s best player – and world record $112 million summer signing – Paul Pogba. The Frenchman illustrated at Euro 2016 that he is not a holding midfielder. Not only does he lack the discipline, positioning and tackling ability for such a role but he is also completely wasted there given his incredible technical talents. As also illustrated at Juventus, he neither possesses the natural playmaking or short-range passing skills to be a No.10.

As he has said himself, Pogba needs to play on the left of a three-man midfield. The 4-3-3 is the obvious system to get the best out of both the Paris-native and an Ibrahimovic flanked either side in attack by Anthony Martial and Marcus Rashford. Given Mourinho recently dropped the declining Wayne Rooney and has shown little interest in fielding Henrikh Mkhitaryan – two players only suited to the No.10 position in the 4-2-3-1 – it makes no sense for the Portuguese to continue with his current setup.

It is no coincidence that in the last six years Mourinho has won six trophies (two of these Supercups and none of them European titles), compared to the 17 he bagged in the seven years prior – which comprised of six league championships, two Champions Leagues and a UEFA Cup.

It was already clear at the end of his Chelsea reign that Mourinho’s version of the 4-2-3-1 needed to be rebranded but he has made no attempt to do that at Manchester United – and it is a natural consequence that he has endured such a difficult start to his reign at Old Trafford.

For a manager who once labelled Sam Allardyce’s tactics as “football from the 19th century”, it is about time an outdated Mourinho got out of the prehistoric age before he also becomes a “specialist in failure”.