Chelsea lit up Stamford Bridge on Bonfire Night through the gunpowder in Eden Hazard's boots as it left a strong Everton side smoldering in a pile of ash during a dominant 5-0 victory.

The Belgian scored for a fourth successive league match for the first time in his career to ignite his side, while Diego Costa and Pedro also provided fireworks on a memorable Nov. 5 evening.

When manager Antonio Conte took over the club in the summer after the Blues had endured a miserable campaign, he said he saw a "small flame flickering that can grow into a blazing inferno".

Few would have believed that the Italian's words had any meaning after they were hammered 3-0 by Arsenal at the Emirates Stadium last month. However, a switch in system to a 3-4-3 has revitalised his side, with Hazard and Diego Costa leading the way.

And Chelsea now leads the Premier League after Manchester City faltered at home to Middlesbrough.

Conte has allowed Chelsea fans to dream again and it inspired some of his players to reach new heights. Hazard, reborn as a world-class player with five goals and one assist in his last four games, is a shining example of this. 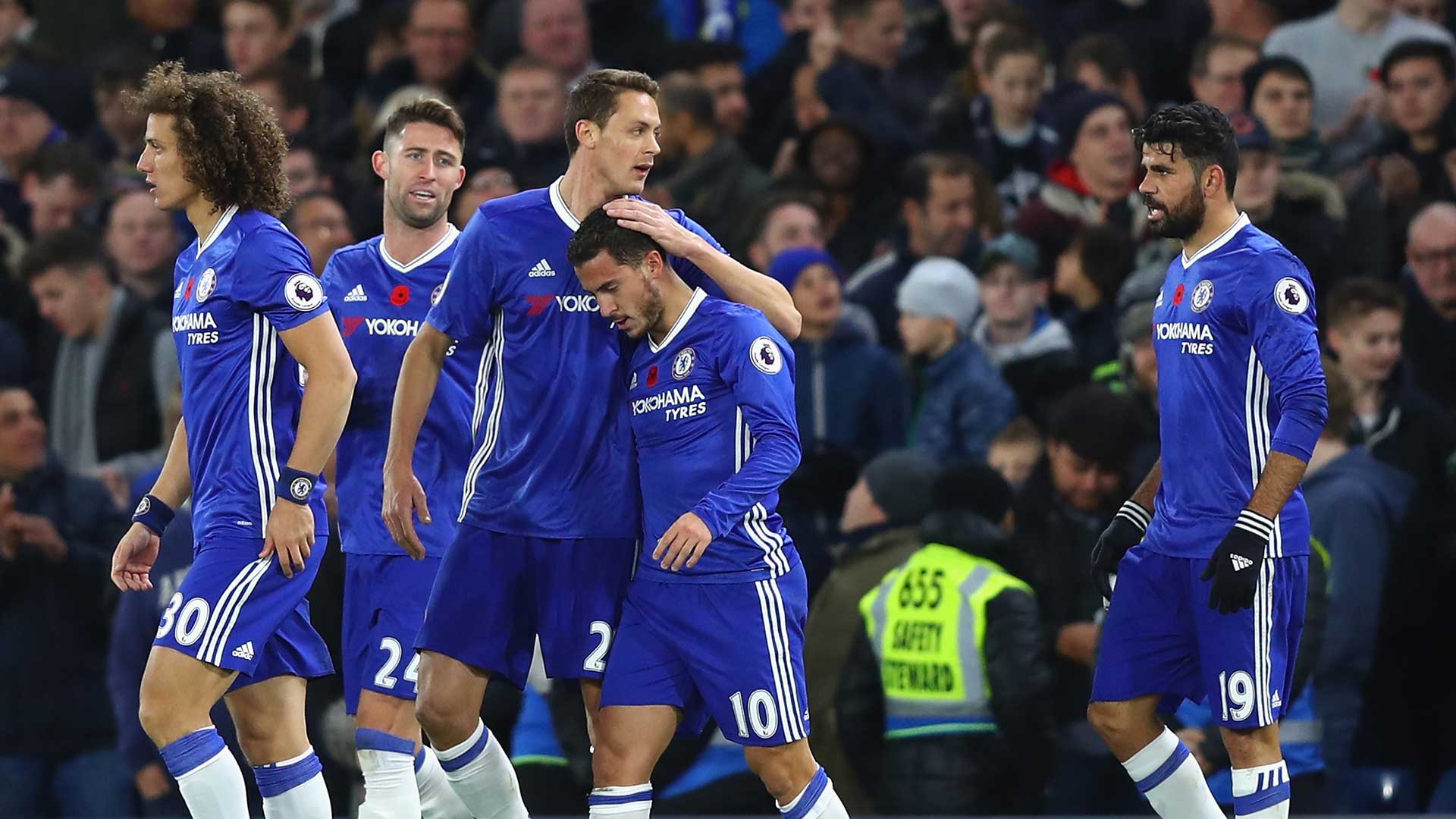 Diego Costa, meanwhile, is once again the league's most effective goalscorer, vindicating the club's decision to sell Romelu Lukaku and place its faith in the Spain international. Perhaps most impressively he proved, once again, that he won't be coaxed into a reaction any longer as he powered on admirably, despite an early challenge from Seamus Coleman leaving him with a bloody sock.

Powerhouse midfielder Nemanja Matic is another figure touching levels not attained since the Premier League was last lifted. He has banished calls for Conte to bring Cesc Fabregas back into the first team by making more assists than he managed in the whole of the previous campaign — only Kevin De Bruyne in the Premier League leads him in this category.

All this has been orchestrated by their maestro in the dugout. Conte's performance on the touchline is comparable to a classical music conductor as he feverishly gives instruction to his players at every moment. He aggressively gestured for Marcos Alonso to get further forward after identifying weaknesses down Everton's right hand side. Shortly afterwards, the former Fiorentina man got his first goal for the club.

Chelsea is predictable but so far unstoppable. Visiting boss Ronald Koeman aimed to match his opponents by instructing his Everton side to mirror their hosts' 3-4-3 system. It failed because the hosts' clever pressing never allowed them to get hold of the ball.

With seven clean sheets in succession, this was a complete performance from the Blues.

At the start of the season, Champions League football was the target for Conte, but such is the manner in which the Italian is fanning the flames at Stamford Bridge, the Premier League title itself is looking an increasingly feasible goal.