By Andy Brassell and Graham Lister
A few examples of what not to do for Carlo Ancelotti's men.
One phrase continually cropped up during Carlo Ancelotti's Friday pre-match media briefing; "pay attention". Chelsea's task in order to reclaim the Premier League title for the first time since 2006 couldn't be simpler. If they fulfill the seemingly straightforward aim of beating Wigan Athletic at Stamford Bridge, it's theirs.

Yet the Blues' coach couldn't have counseled more caution if he had turned up to face the media wearing a hard hat and a high-visibility jacket.

Ancelotti is right to do this. He has, of course, his own experience of last day failure from his spell as Juventus boss, but the English game is no stranger to final furlong flops. Goal.com UK has gone back through the archives to bring the best - or worst...

Derby eventually came out on top of a four-horse race to win their first (and manager Brian Clough's first) top-flight title, but they had to endure an agonizing finish.

The Rams went top after beating Liverpool in their final fixture on May 1st, but the Reds and Leeds still had a game each to play, following the Leeds vs. Arsenal FA Cup final on May 6th.

Leeds could have completed the double by drawing with Wolverhampton Wanderers, but their loss meant Liverpool could overtake both Don Revie's side and Derby by beating Arsenal at Highbury.

The match finished 0-0 and Clough's side - already on a post-season holiday in Majorca - could celebrate. 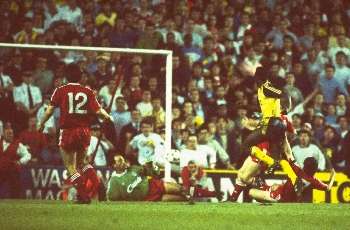 
Arsenal had led for much of the season, but a phenomenal run of 13 wins and a draw from their final 14 games gave the champions the advantage going into the final fixture, a Friday night head-to-head between the two. The match had been moved in the aftermath of the Hillsborough tragedy in April.

George Graham's side required not only a win, but a win by two clear goals. Alan Smith's controversial opener (it was initially unclear whether the striker had in fact got a touch to Nigel Winterburn's indirect free-kick) gave the Londoners hope, but it looked like Kenny Dalglish's side would hang on.

However, in injury-time Michael Thomas burst through and, taking advantage of a fortunate rebound from Steve Nicol, fired in.

The Gunners won the league on goals scored, with both teams level on points and goal difference. 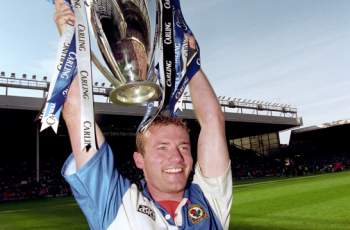 In some ways it was a reprise of Sunday May 14th, 1995. Former Reds boss Dalglish's Blackburn arrived at Anfield knowing a win would clinch the Premier League, but anything less would give United the chance to steal.

All was going according to plan when Alan Shearer put the visitors ahead after 20 minutes, but John Barnes equalized midway through the second period and it looked like a dose of Darwen despair when Jamie Redknapp curled in a stoppage-time winner.

However, despite Brian McClair canceling out Michael Hughes' opener for West Ham United, the Red Devils couldn't find a winner at Upton Park, with Andy Cole in particular frequently frustrated by Ludek Miklosko in the Hammers' goal. Rovers sneaked home.