Chris Wheatley
The coach's pulling power at the north London club shouldn’t be underestimated and it’s vital for him to extend his deal to avoid issues this summer.

Arsenal is trying to tie its best players down to long-term contracts in case the unthinkable does happen this summer. Arsene Wenger has spent 20 years at the club and, while he has yet to give any indication on whether he’ll be there next season, it’s significant that Mesut Ozil is waiting for the Frenchman to make a decision on his own future before extending his deal at Emirates Stadium.

Wenger’s side has gone 10 matches unbeaten in all competitions since losing to Liverpool on the opening day of the season and Wednesday night’s 6-0 rout over Ludogorets in the Champions League provided another mark of how far the team has come in the space of two months. The Gunners look solid as a defensive unit and unstoppable in attack with the triumvirate of Alexis Sanchez, Theo Walcott and Ozil.

The news that Arsenal has offered Wenger a contract extension is a big boost for those who want the club to keep its best players. Ozil in particular decided to join the north London giant after the Frenchman called him up, while he also played an integral part in bringing Alexis Sanchez from Barcelona in 2014. Now it’s up to Wenger to decide where his future lies, with many expecting him to sign a new contract at Arsenal.

While many have suggested that Arsenal’s two best players are holding out for bigger contracts - including himself - it is simply not the case that Ozil is seeking financial gain from his latest contract extension. The current footballing climate means he is able to demand a top-level contract wherever he signs. Instead, Ozil wants to be assured that the man who brought him to Arsenal will be continuing on the journey with him, otherwise it’s likely that he’ll assess his options at the end of the season. 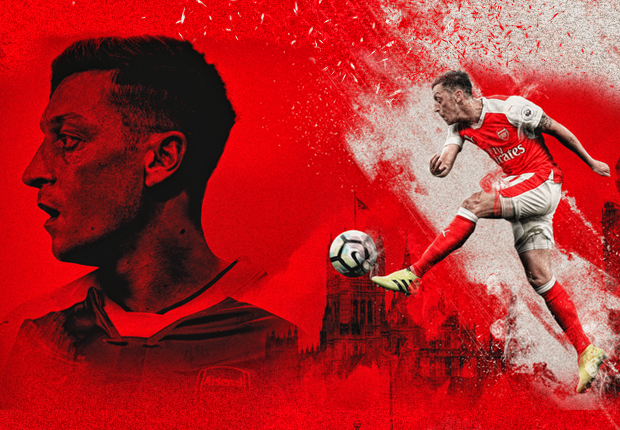 Ozil is happy with life in London and wants to stay at Arsenal but the key factor in his contract renewal will be whether Wenger decides to extend his contract with the club. The same is likely to apply for Sanchez, a player who has cut a frustrated figure when substituted in recent games. Juventus expressed interested in the Chilean throughout the summer and several European giants will come calling if they hear that he is stalling over a new deal.

Negotiations have yet to begin over extending the contracts of Theo Walcott, Kieran Gibbs or Alex Oxlade-Chamberlain, with the latter admitting last weekend that he will assess his Arsenal future at the end of the season. Wenger insists that contracts are not worth the paper they are written on these days and explained his thinking behind offering Sanchez and Ozil new contracts at least two years before they end.

What we learned from the UCL

“I find when you start a contract you agree to commit for the length of the contract for the money you have signed for. But that is basically not the case because of you only retain the value of the player if you extend the contract two years before the end of a contract, or sometimes one year.

“Then you are always in a delicate situation because now do you sell with one year to go knowing you will get less money than when he has two years? So basically you have not much choice.”

The heap of contracts Arsenal needs to renegotiate this season include Santi Cazorla and Per Mertesacker, who are free agents next summer, and it's expected that the club captain appointed in August will move on after five years. Aaron Ramsey, Olivier Giroud, Chamberlain and Gibbs are all out of contract by June 2018 and will be able to hold talks with other teams in 14 months time.

For now it remains imperative that Wenger signs a contract extension at Arsenal if the club wants to keep Ozil in particular. The German has made it clear he wants to know who will be manager next season before he commits his long-term future to the club and many will see that as an indication of just how influential Wenger still is at Arsenal.