Atletico Madrid lifted a European trophy for the first time in 24 years as a Diego Forlan double sank Fulham after extra-time in the Europa League Final at the HSH Nordbank Arena in Hamburg.

An opportunist's finish from Forlan gave Atleti the lead over their opponents, but Simon Davies' equalizer just before the break saw the scoreline level after ninety minutes. Forlan himself then popped up in the second period of stoppage time for the winner.

The Spanish narrowly side had the best of what was a largely even opening period, but both goalkeepers had their saves to make, much to the delight of the large contingent of neutral fans.

Despite their giant-killing credentials, Fulham struggled to assert themselves early on in the face of Atletico pressure.

The Spaniards, who achieved mainly draws on their path to the final, played swift, attacking football, culminating both in a series of corners and also a strike that hit the post from the effervescent Diego Forlan within the opening ten minutes.

Dickson Etuhu's rash challenge on Tomas Ujfalusi outside the area belied the pressure on the Cottagers, but Mark Schwarzer was on hand to prevent a Jose Antonio Reyes goal with a fine save on the quarter-hour mark.

Sergio Aguero and Forlan looked to be the most dangerous men on the pitch, and thus it proved just after the half-hour when the latter took the lead. Indeed, it was borne of the former's scuffed shot from 16 yards, but Forlan was on hand to nip between the dozing defense and side-foot it home first time - a true striker's finish.

But anyone who's watched the Europa League this season knows not to write Fulham off too early. Just five minutes later they were on level terms, Simon Davies concluding a brief moment of Fulham pressure against a disorganized Atleti backline with a tight-angled, close-ranged finish. The highly-rated Bobby Zamora was the architect, as so often he has been this season.

Atleti closed the half with a penalty appeal against Paul Konchesky, who appeared to handle a Reyes shot, but referee Nicola Rizzoli saw nothing, and the scoreline was level heading into the second half. 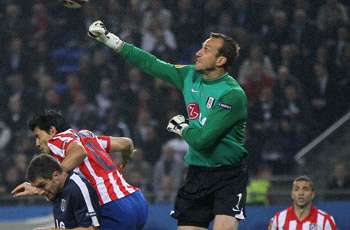 Fulham came out with significantly more optimism after the break, Zamora and Zoltan Gera confidently setting about their opponents with a series of through balls and speculative efforts.

However, none were coming off, and as Zamora trudged off due to injury ten minutes after the break the Cottagers fans could be forgiven for thinking that Fulham would retreat.

Instead the irrepressible Davies still looked dangerous with long-range shots, but again there was insufficient accuracy about the Londoners' play.

Atleti had to make a change of their own twenty minutes from time as they continued to weather pressure, Simao coming off for Jose Jurado, but the introduction of the winger, as well as Toto Salvio, did little to add more fluency to Atleti's play.

Indeed, by this time nerves were frayed as the final whistle approached, the match ending with a halfhearted penalty claim from Aguero after a Brede Hangeland challenge. 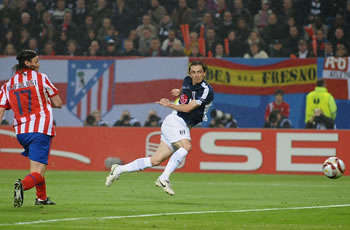 Extra time thus began, and this time the English once more came out of the blocks stronger.

Erik Nevland should have netted when put through by a dinked ball from Chris Baid, but instead the Norwegian fired extremely wide.

But with five minutes remaining in the first half of the extra period, Mark Schwarzer was the hero as Diego Forlan's cut-back saw the goalkeeper stretch to parry clear for an Etuhu punt.

The goalkeeper, though, was then almost caught out. Forlan was again the architect as he freed Salvio in the box, but the substitute could only manage a ball across goal. With Schwarzer on the ground the ball rolled to Aguero, but the Argentine tapped it inches wide from mere feet out.

Atleti were clearly buoyed by that near miss, and in the second period of extra time the match was open with chances at both ends.

But the decisive one fell to Diego Forlan. Aguero brilliantly kept the ball in play on the left flank, strode into the box and played it past Aaron Hughes for - inevitably - Diego Forlan to fire a deflected finish home.

Fulham threw everything forward after that but with just four minutes left it was Atleti's trophy - their first in fourteen years and their first on the continental stage in almost a quarter of a century. 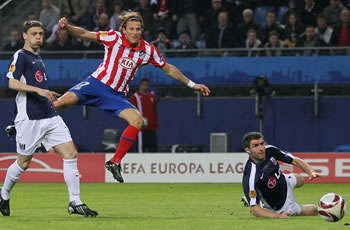 Talk all things soccer with the rest of our readers in the Goal.com Forums and join Goal.com USA's Facebook fan page!
Close