A stunning brace of free kicks from Keisuke Honda and Yaushito Endo gave Japan a richly deserved victory over Denmark as they progressed to the knockout stages for the first time outside their home country. They join South Korea in the last sixteen with Asia securing two places in the second round also for the first time outside of that continent.

The Samurai Blues landed their first knockout blow just after the quarter-hour. From 35 yards out on the right hand side of the pitch, Keisuke Honda fizzed the ball over the wall and impossibly beyond Sorensen. Though the keeper could be faulted for his footwork, it would be an injustice to take anything away from the CSKA star whose technique was reminiscent of the former Lyon midfielder Juninho Pernambucano.

When Japan won a free kick on the half-hour, everyone expected Honda to try and repeat the trick. However this is a real cohesive unit without stars and Asian Player of the Year Yaushito Endo stepped up and curled the ball beautifully into the net beyond a despairing Sorensen.

There had been a few butterflies for the Japanese fans early on when Simon Poulsen's cross took a deflection and fooled the Japanese defense, however Jon-Dahl Tomasson missed his attempt at an acrobatic volley and the ball skipped behind for a corner.

Then out of nothing, the East Asian side almost produced a goal. Yoshito Okubo delivered a wicked ball into the box, which enticed Sorensen from his goal. Daisuke Matsui attacked the pass but could only flick the ball against a somewhat fortunate Danish goalkeeper. Captain Makoto Hasebe then fired wide from a smart through ball with Agger caught hopelessly out of position. 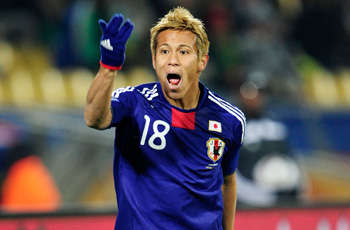 With the tempo now a great deal more upbeat, Jon Dahl Tomasson sparkled with his own moment of brilliance, almost passing the ball into the net from an acute angle. It was shortly after that Japan were about to dazzle the Danes.

In the second half, Endo almost made it three goals from free-kicks. Sensing a Danish keeper devoid of confidence, he tested out the Stoke man who was leaden-footed and lazily tipped the ball onto the post.

Tomasson took it upon himself to attempt to haul the Danes back into the game. Latching on to a rare Bendtner flick-on, the ball ran away from the Feyenoord striker by which time Kawashima was able to smother the angle and parry the ball behind.

The Danes looked more likely to salvage their World Cup once Christian Eriksen had been introduced. After a bright start, he showed excellent technique volleying narrowly over from well outside the area. However his sharp running was not enough and was indeed wasted against the backdrop of a neanderthal Danish style of football that is surely outdated at this level.

Tomasson was presented with a good chance to get on the scoresheet but after enduring a frustrating 70 minutes, he completely scuffed his shot and the opportunity evaporated. His fellow striker Soren Larsen looked the most likely to score and he rattled the crossbar with a terrific left-foot volley.

The Danes received an undeserved lifeline when Hasebe pushed Agger over in the box. Tomasson stepped up to equal the Danish goalscoring record and was fortunate to score the rebound after Kawashima saved a poor spot kick. Just as Denmark had a glimpse of hope, a moment of brilliance from Honda when he left Rommedahl for dead set up substitute Shinji Okazaki who tapped the ball into the empty net.

The 2010 World Cup is finally here, so keep up to date with all the news at Goal.com's World Cup homepage and join Goal.com USA's Facebook fan page!