By Kingsley Kobo
Sven-Goran Eriksson's side almost emerged victorious...
Paraguay and Ivory Coast played out an entertaining 2-2 draw at the Stade Joseph-Monya in a friendly international.

Both teams started the match rather timidly with Paraguay showing more confidence and patience. However, in the fifth minute Aruna Dindane’s penetration into the Paraguayan defence was threatening but he was quickly marked out.

Barcelona midfielder Yaya Touré’s cross to Arsenal’s Emmanuel Eboué in the 12th minute was the Elephants’ best action so far but the Paraguayan defence held strong. Moments later Chelsea’s Salomon Kalou raced with a ball from the left flank but he was brought down even before he could send in the cross.

By the 20th minute of the game, both teams had tried their best to create opportunities for themselves but in vain. Ivory Coast’s Aruna Dindane then endeavoured to activate his side from the right flank but he was stopped in his tracks by the alert Paraguayan backline.

Soon a corner kick executed by Ivory Coast’s Tioté created a goalmouth scramble in the Paraguayan half; Aruna missed the last shot which could have seared into the South Americans’ net.

On the half hour mark Drogba’s first real move landed him in the Paraguayan box, but he was outmuscled by a defender. Minutes later a perfect cross from Aruna on the left flank found Drogba right in front of Paraguayan goalkeeper, but his header went wide.

The West Africans multiplied their goal chances towards the end of the first half, but couldn't hit the target. It finished 0-0 at the break. 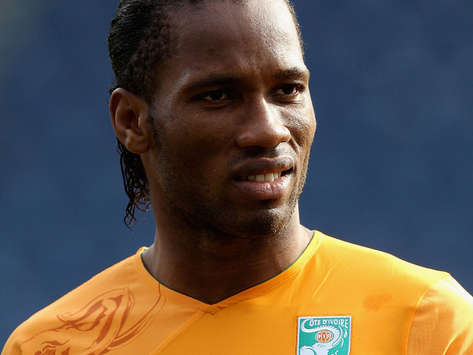 The second half began with the Ivorians showing more motivation and enthusiasm and duly broke the deadlock. Emmanuel Eboué’s pacy move yielded a free-kick which Drogba converted in the 54th minute.

Ivory Coast took control of the proceedings by the 60th minute with them retaining possession most of the time. Second half entrant Gervinho added more pace to Ivory Coast’s attacking line, but they failed to take their chances that they created.

Gervinho took off in the left flank and almost caused havoc for Paraguay, but a quick-regrouping defence allayed the danger.

Paraguay's goalkeeper Justo Villar saved a ball pushed forth by Aruna by rushing forward when his defenders were off-balance.

A free-kick taken by Eboué from the left side of the Paraguayan goal yielded Ivory Coast’s second goal, scored by Bamba Souleyman in the 74th minute. However, Paraguay’s reaction came inside less than a minute in a rapid counter-attacking move that saw Lucas Barrios' low shot get into the Ivorian goal.

With less than 15 minutes left on the clock, both sides pressed hard and it was Paraguay who got the game's fourth and final goal in the 90th minute.Aureliano Torres scored from a freekick in the dying seconds to make it 2-2 at the death.

The 2010 World Cup is fast approaching, so keep up to date with all the news at Goal.com's World Cup homepage and join Goal.com USA's Facebook fan page!