Ives Galarcep
The U.S. coach and his captain have very different views about where best to deploy Michael Bradley in the U.S. lineup.

SAN JOSE, Costa Rica — For some time now, there has been an unspoken tension in the U.S. national team camp between head coach Jurgen Klinsmann and team captain Michael Bradley over just what role Bradley should be playing for the United States. A tension that appeared to bubble to the surface following Friday’s loss to Mexico.

Howard out for the rest of the MLS season

Klinsmann called out Bradley and Jermaine Jones for not playing well enough in the first half of Friday’s 2-1 loss to Mexico, blaming their struggles for the issues faced by the U.S. team’s surprising 3-4-3 formation. Bradley issued some not-so-subtle suggestions that the team didn’t have clear ideas about how to carry out the tactics of Klinsmann’s experimental formation.

At the heart of this ongoing conflict has been Bradley’s own evolution as a midfielder, which has seen him transform into a more defensive-minded midfielder, which hasn’t fit in with Klinsmann’s continued use of Bradley in a box-to-box role, often partnering him with the unpredictable Jermaine Jones.

The simple solution would seem to be to play Bradley as a pure defensive midfielder. It is the same role Kyle Beckerman has filled for much of the past three years and the same role in which Bradley is currently starring for Toronto FC.

Klinsmann shot that notion down during a round table with national reporters ahead of Tuesday’s World Cup qualifier against Costa Rica. When asked by Goal USA if he didn’t like Bradley in the number six role (the numerical label for a pure defensive midfielder), Klinsmann made it clear that he believes the role wouldn’t make full use of Bradley’s considerable talents. 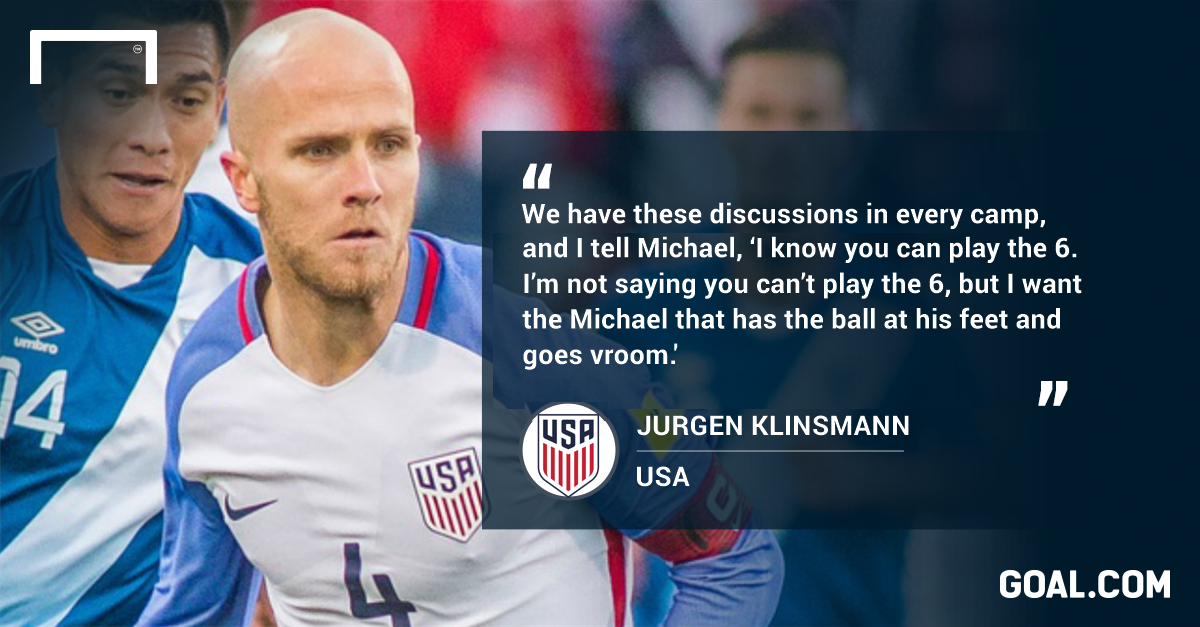 “We have these discussions in every camp, Michael and I, and it’s cool, and I tell Michael, ‘I know you can play the six. I’m not saying you can’t play the six, but I want the Michael that has the ball at his feet and goes vroom, like you beat Germany, and Holland, and all these games,’” Klinsmann said. “The second half against Mexico, we’ll take that. When he wins the ball up the field and he shoots—he could have passed it over to Bobby—but that is a difference. That moment, stepping in there, winning that ball and suddenly we have a big chance to score the second goal.”

Bradley has been a box-to-box midfielder for the U.S. since his father was a coach, and has continued in that sort of role under Klinsmann, with the exceptions being when Klinsmann has chosen to play him even further up the field, as he did at the 2014 World Cup.

“We go back now to that thought process of who is a difference maker, and in what way,” Klinsmann said. “I always say that over five years now that Michael Bradley is a difference maker when he goes through the midfield with the ball at his feet, when he plays a final pass, when he maybe does a chip over the back line, when he breaks into the box, when he plays a killer ball, when he has that energy that he transmits with a dynamic approach where the opponent is literally like frozen.”

Bradley has never been one to complain openly about where he has been used by Klinsmann, but in a recent interview with Goal USA, the U.S. captain made it clear that, while he is ready to play whatever role he is given, he firmly believes that at this point in his career he can best impact matches as a deep-lying midfielder.

“When Jurgen wanted to use me in a more attacking role it was no issue for me,” Bradley told Goal USA. “I’ve done that and I’m always ready to do whatever I can to help the team win. I’m not someone who's going to sit around and complain, or sit around and feel sorry for myself that maybe in some ways I’m not being used in the perfect way. It’s about the game, it’s about guys who are ready to spill their heart and soul on the field to do everything possible to help the team win and I’ve always done that.

“But again, when I look at myself, when i think about the things I’m good at, the things I can give to a team, I think that my ability to play deep in midfield is something that is very good."

Bradley went on to explain in detail why he feels more confident in the deeper role.

“From that spot I'm able to read the game and organize guys around me and really lead from there,” Bradley said. “I think defensively my ability to tackle and intercept and recover balls and make the game difficult for the other team in that area of the field is very good.

“I think when we have the ball the way I can help us find a rhythm and make sure our talented attacking players get the ball in the right moments, the right spots, is always a plus,” Bradley went on. “Obviously then the balance, the way i can read the game and know when we can step up and press and in some ways i can be the first line of pressure to help us reorganize quickly and press right away when we lose it. In other moments coming back and giving the center backs protection.”

The big issue with the current national team personnel is that the preferred central midfield tandem of Bradley and Jones has struggled at times to find a good balance. In the early years of their partnership, the struggle was rooted in the fact that both players enjoyed getting forward, which could leave the team exposed at times. A more recent issue, as seen against Mexico, was one of spacing and positional discipline, things Jones has struggled with.

Klinsmann found a good compromise with the integration of Kyle Beckerman, who could sit deep, thus allowing Jones and Bradley more freedom to attack and cover ground. But with Beckerman being fazed out, and Christian Pulisic forcing his way in, the U.S. must find a way to make a Bradley-Jones pairing work under new circumstances.

The difference in opinion between Bradley and Klinsmann is obvious and fundamental, as Klinsmann made clear when explaining what he thinks Bradley playing in a pure defensive midfield would mean for the national team.

Rooney and Chicharito on LAFC shortlist

“Then Michael would play the same role he does in Toronto for us, just being in front of the back line and floating, being a nice passer, which he does undoubtedly well, and I don’t know how many completed passes and stuff like that,” Klinsmann said. “It’s all nice, it’s no doubt, but it doesn’t make a difference for us.”

Klinsmann went on to explain that he feels other teams adjust more to Bradley as a playmaker.

“Costa Rica is fearing Michael Bradley coming through midfield, doing a final pass, doing a chip ball to Bobby or Jozy,” Klinsmann said. “They don’t fear Michael sitting in front of the back line.”

Klinsmann may have a point, but if the Ticos find success creating chances against a U.S. defense that lacks the reinforcement of a strong defensive midfielder, and the Americans lose, Klinsmann may have to start giving some thought to playing his captain at what he feels is his best position.