By Thomas Floyd
The goalkeeper struggled in the group stage but capped his knockout round with the decisive penalty save as Chile won the Copa America Centenario.

EAST RUTHERFORD, N.J. — Claudio Bravo strolled up to the podium in businesslike fashion, gripping the Copa America Centenario trophy and lifting it above his head. No nerves. Relaxed joy. He knows the drill, after all.

It's a scene we saw a year ago, when Bravo captained Chile to its first Copa America title. The Barcelona goalkeeper had barely gone a month without a taste of silverware, in fact, having claimed the Liga and Copa del Rey crowns. The shootout victory over Argentina on Sunday at MetLife Stadium made for yet another prestigious honor in Bravo's decorated career.

Yet there was plenty of reason for doubt just 12 days ago, 95 miles down the road at Lincoln Financial Field in Philadelphia. Although Chile notched a 4-2 win over Panama that night to book a spot in the knockout round, Bravo conceded a pair of howlers — first a shot from distance that skipped through his hands, then a butchered stop on a tight-angled header.

With Bravo coming off his second disappointing performance of the group stage, Chile coach Juan Antonio Pizzi found himself doing the unthinkable: defending his captain's place in the starting lineup.

"Claudio is not only my starting goalkeeper — he's also the captain of this generation of players that has given a lot of happiness to the country," Pizzi said through a translator. "Besides respecting him as a player, I respect him as a professional. I'm sure that he's going to overcome the sadness that he may have."

That he did. Not only did Bravo raise the Copa America trophy Sunday — he also earned the Golden Glove as the tournament's top goalkeeper. The 33-year-old may have allowed two near-post strikes in Chile's 2-1 loss to Argentina to open the tournament, but he stepped up against the Albiceleste when it mattered most. 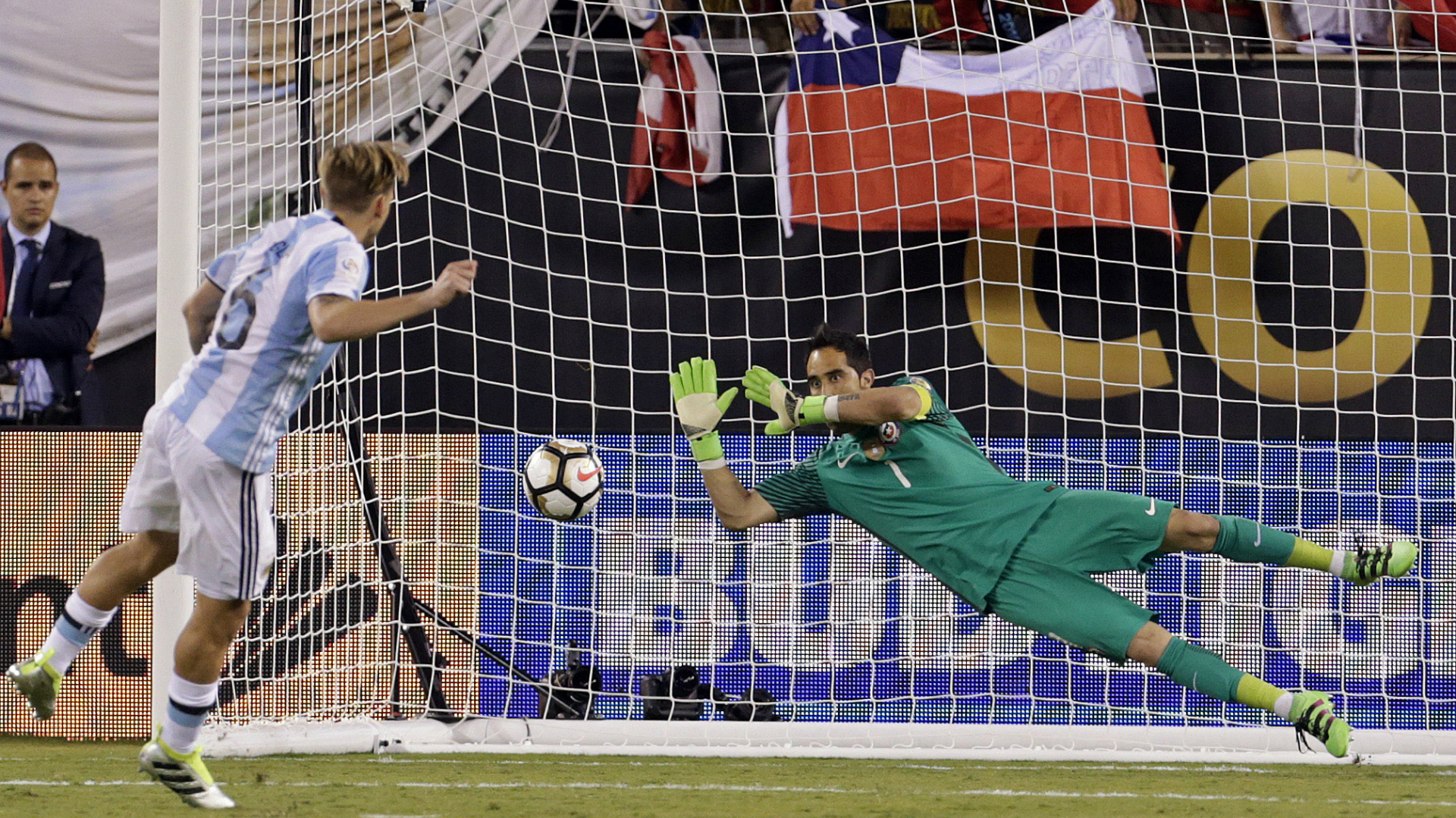 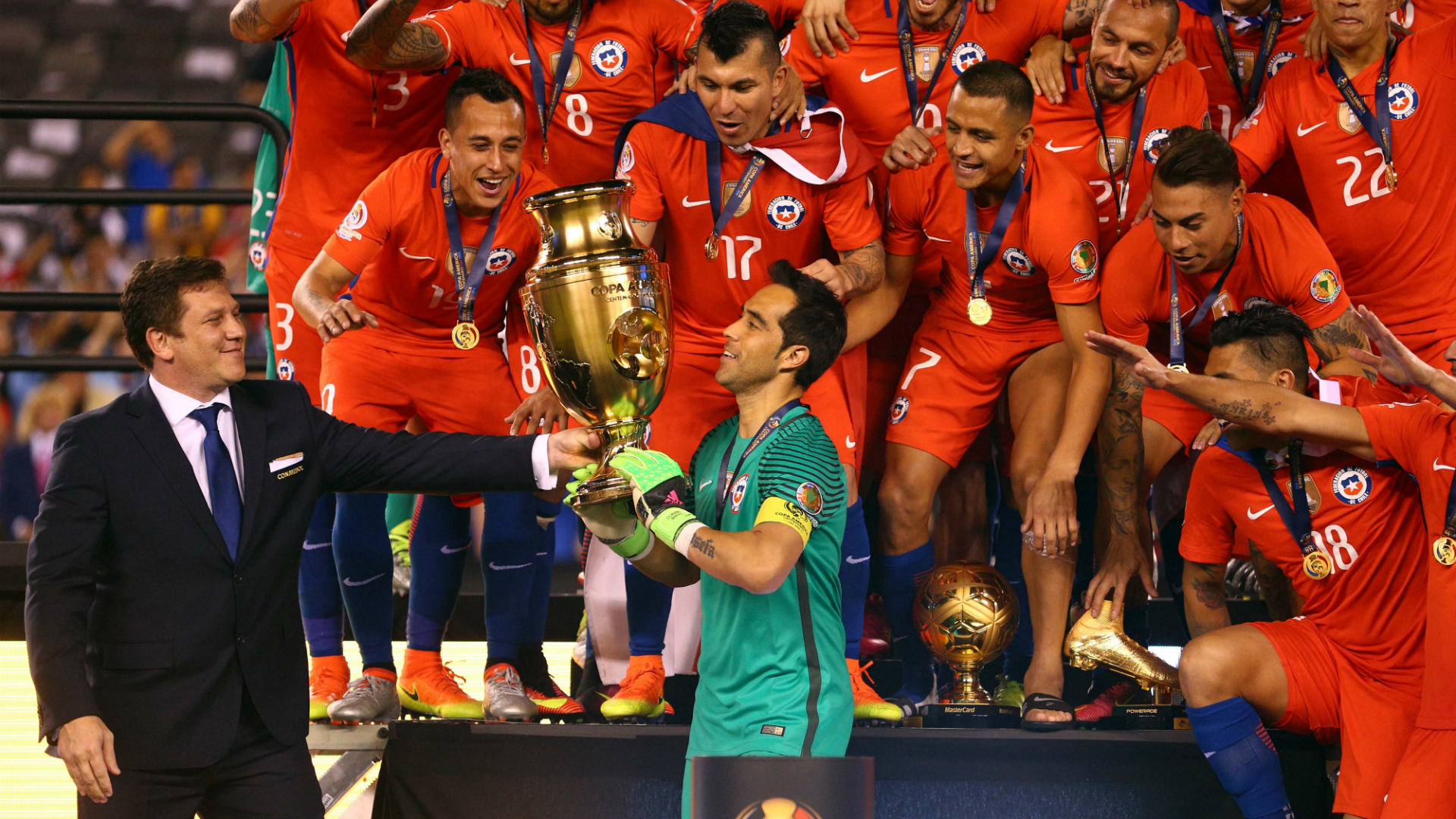 The truth is Bravo wasn't called upon for heroics too often in the knockout round. He was largely a spectator in the 7-0 destruction of Mexico in the quarterfinals, and the 2-0 semifinal win over Colombia was relatively comfortable after Los Cafeteros went down a man early in the second half. But he delivered with a slew of scrambling saves in the first half against Colombia, and he made made the difference with two big-time stops in the final.

History, of course, will immortalize that moment when Lionel Messi — in what could be the final touch of his Argentina career — skied his penalty high above the bar. Chile fans? They'll remember the 101st minute. As Sergio Aguero steered a looping header just below the crossbar, Bravo delivered the save of the tournament with an acrobatic, lunging effort to keep the match scoreless.

When penalties did arrive, Bravo didn't disappoint. After Arturo Vidal and Messi traded failed efforts to start, both sides converted with expected efficiency — until Lucas Biglia stepped up to take Argentina's fourth shot. This time, Bravo read the shooter. This time, Bravo took a step in the right direction before ball met foot. Bravo denied Biglia, just as he denied Ever Banega in Chile's shootout win over Argentina in the 2015 final.

As Francisco Silva lined up the decisive penalty, Bravo casually jogged around the edge of the box. It was a preemptive victory lap of sorts, perhaps to rattle opposite number Sergio Romero. It mattered not — Romero had no hope as Silva fired into the lower corner.

Bravo dropped to his knees, and soon he was swarmed. Chile rallied around its captain once more.