By Thomas Floyd
The 25-year-old has grown into an influential player off the bench since debuting for the U.S. national team in November.

But the U.S. national team coach also sees room to develop. While Nagbe is a 25-year-old in his sixth campaign with the Portland Timbers, the naturalized citizen didn't make his U.S. debut until November. For all of the promise the midfielder has displayed in his eight caps, that first start remains elusive.

"He's growing," Klinsmann said. "His tremendous upsides are his technique, how smooth he is on the ball, how he can create something out of nothing and take people on. What he's learning right now is the tempo at the international level in both ways — defensively and going forward."

A starting assignment could come when the U.S. continues its Copa America Centenario campaign against Costa Rica on Tuesday at Soldier Field.

The Liberian-born playmaker logged 24 minutes in a 2-0 loss to Colombia on Friday to open the tournament, adding fluidity to an attack that struggled to break down a disciplined defense. Having established himself as the first option off the bench, Nagbe seems like a logical option if Klinsmann wants to inject his attack with some fresh blood Tuesday.

"It was good coming into the game — I wasn’t nervous," Nagbe said. "With more camps and more games I get to play with these guys I get to know them. I think chemistry is huge when it comes to the national team because you're not together all the time. It's getting there."

The loss to Colombia marked just Nagbe's fourth competitive appearance as he continues to make his case for breaking into Klinsmann's midfield. 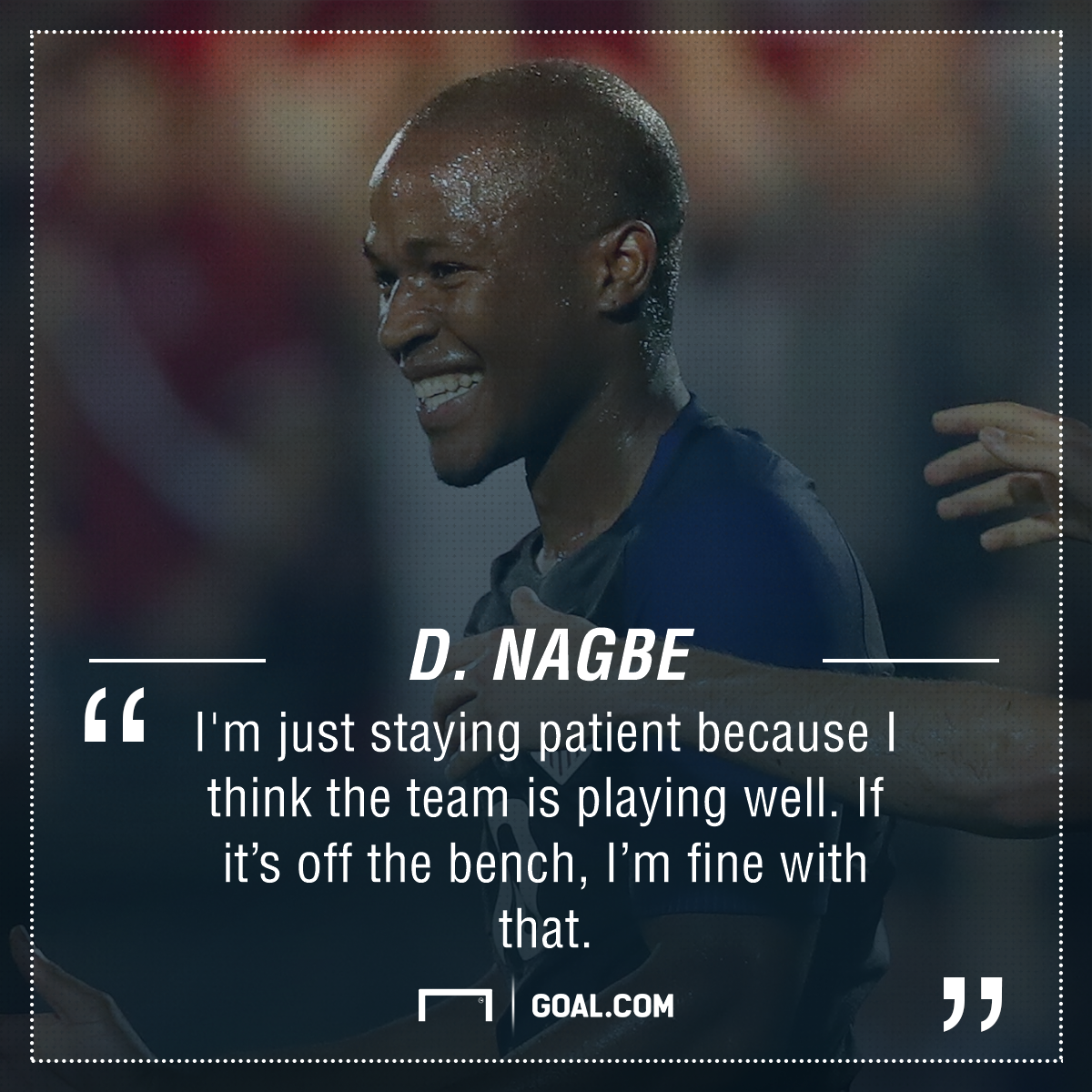 Although Nagbe's early caps came without a tangible impact in the final third, the Copa America tune-ups saw the Akron product notch his first international goal on a stoppage-time winner against Ecuador. Four days later, he used slick combination play to tee up a Christian Pulisic strike versus Bolivia.

"He doesn't get worked up when there's a couple guys on him — he always seems to get out of pressure and relieve the stress," U.S. defender Geoff Cameron said. "He gives us a different dynamic. He's a very good, complete player, and when he's on the field he makes a difference."

Whatever part Nagbe plays, he's relishing the chance to represent the country he settled in as an 11-year-old. It wasn't until this past September that Nagbe, whose family was uprooted by the First Liberian Civil War, earned his citizenship and became eligible to play for the U.S.

"You dream of these opportunities and these games," Nagbe said. "To be on the bench against Colombia, seeing the atmosphere and the national anthems and the whole thing, it was great."

While a vocal segment of the U.S. fan base is pushing for Nagbe to earn an increased role, Klinsmann has stayed patient, starting veterans Michael Bradley, Jermaine Jones and Alejandro Bedoya in midfield against Colombia.

Not rushing Nagbe remains an important objective for the U.S. coaching staff. His appearance versus Colombia, the world's No. 3-ranked team, marked the toughest opposition Nagbe has faced in his international career. Before that match, Ecuador was the only other team inside the top 30 that Nagbe had played against.

"The other thing that we learned for all players coming fresh into this program is there's no space really," Klinsmann said. "You saw Darlington coming in and you see how Colombia squeezes the field defensively, so Darlington sees that there's no space. 'Where should I go? What should I do?'

"He has to learn now how to find solutions dealing with far tighter space than he's used to in MLS. But that learning curve is just happening now, so give him some time and I'm very positive that he will figure it out."

For Nagbe's part, he has remained a good soldier. Coming off the bench is an unfamiliar role for a player who has made just four appearances as a substitute over the past five MLS campaigns, but one he has excelled at.

And if that's all he's asked to do this Copa America, he'll have no qualms.

"I'm just staying patient because I think the team is playing well," Nagbe said. "If it’s off the bench, I’m fine with that and just waiting for opportunities."