Daniel Edwards
'O Rei', who turns 76 on Sunday, Pepe, Coutinho and the rest of the 'Santasticos' put the Vila Belmiro club on the map during 10 glorious years, enjoying unprecedented success.
As Pele celebrates his 76th birthday, his place in football's hall of fame is already more than assured. The Brazilian legend boasts a record unmatched by almost any other player in the game's history, and more often than not comes out on top when the greatest-ever debate is rolled out.

But all idols have to start somewhere. O Rei honed his trade in a place not previously renowned for its sporting prowess, and formed a partnership up front that at the time was more than a match for Neymar's association with Luis Suarez and Lionel Messi that continues to take the world by storm.

Pele, Pepe and Coutinho were the 1960s' attacking superstars, and their story began in the humble surroundings of Santos.

Santos holds a unique place in Brazilian football history. The little institution based in the port city of Sao Paulo state which carries the same name is familiar to aficionados of the 'Beautiful Game' from across the globe, a reputation which belies its standing back in the South American country.

Santos cannot claim to be one of the best-supported clubs across the nation. With around five million domestic fans, the team has less than a sixth of those who pledge their loyalties to Flamengo, and also comfortably trails Paulista rivals Corinthians, Palmeiras and Sao Paulo in recent studies. The local adversaries all lead the Vila Belmiro outfit in terms of State Championship victories.

There is no crisis at Man City

However, Santos cannot be defined in terms of cold, prosaic statistics and figures. The club's impact on world football is immeasurable, and it stems from the wonder team headed by Pele in the 1960s which has a legitimate claim to be called the best to ever step foot on a football pitch.

'O Rei', of course, is the most recognizable figure from that side which dominated a decade - but there were so many others. Fellow strikers Pepe and Coutinho (pictured below) joined Pele in an attack which earned the Brazilians their iconic 'Santasticos' nickname as they laid waste to the best at home, in South America and in the world, so much so that many statisticians draw a line under the era. No matter what MSN achieves at Barcelona, they will not come close to the other-worldly numbers the trio posted during that glorious period for O Peixe. 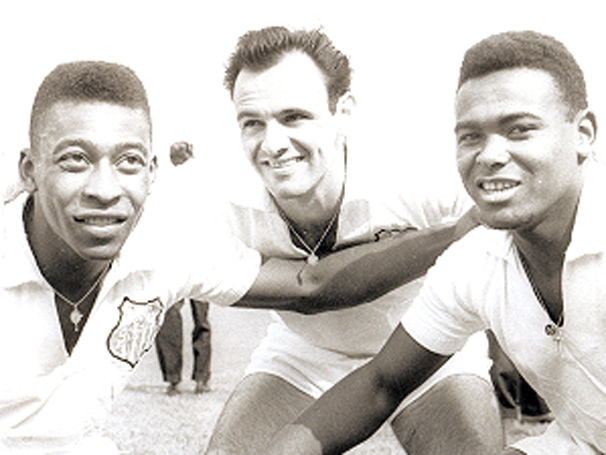 The zenith of the Santasticos ascendancy came in 1962. Perhaps no team since - with the possible exception of Pep Guardiola's Barcelona with Lionel Messi, Xavi and Andres Iniesta - has ever dominated one year so comprehensively. A first-ever quadruple in history was won, as the Paulista, the Taca Brasil, the Copa Libertadores and the Intercontinental Cup all ended in Peixe hands.

The Intercontinental triumph was clinched in a pulsating return fixture in the Estadio da Luz against Benfica, and the meeting between superstars Pele and Eusebio. The Mozambique-born legend did find the score sheet that night, but it was after watching his rival net a glorious hat trick as Santos romped to a 5-2 victory, 8-4 on aggregate. If the Brazil World Cup victory of the same year is taken into account, the squad including as it did eight players from the so-named 'White ballet', there is no doubt that in the first half of the 1960s football began and ended with Santos and its outrageously talented stars.

But the impact of that iconic side reached far beyond the unprecedented success between the confines of a football pitch. Pele's men were football's Harlem Globetrotters between championships, touring incessantly and winning fans across the world; no more so than in Africa, where 'O Rei' enjoys almost deity status. Perhaps the most startling example of their importance, and football's came in 1969. A friendly fixture in Nigeria was under threat due to the tragic civil war that was unfolding against the breakaway state of Biafra.

But hostilities ceased in order to allow Santos to take the field, and military authorities even opened checkpoints and bridges to give previously warring communities the chance to witness together the greatest team of the age. Striker Lima perhaps best summed up the surreal nature of that trip.

Initesta: Injury could have been worse

"It was strange because the whole country was divided and in conflict. But as soon as they found out the game was to take place that was put on hold. It was a tiny pitch, I remember it well, the people arrived carrying chairs on their heads in order to watch the game."

There have been many great club teams since the 1960s who have held a legitimate claim to be the best or one of the best of their time. The Ajax team of the 1970s, Milan under Arrigo Sacchi, and indeed the Barcelona side coached so masterfully by Pep Guardiola all deserve recognition for how their success and playing style has left its mark on world football.

But the Brazilians merit a special place in the pantheon of the game's greatest institutions. The images may be grainy and black and white, and the memories of those involved may have started to fade into a murky combination of myth and legend, but the impact of Pele's Santasticos as they conquered Brazil, South America and finally the hearts of the world must always be recalled with the most vivid colour.