By J.R. Eskilson
Pateadores 2010-2011 regular season comes to an end after a wild ride of emotions. Head coach Todd Saldana and assistant coach Thomas Dooley talk about the team.
Pateadores U-18 head coach Todd Saldana called it possibly ‘one of the greatest stories in youth soccer.’ Others may be hesitant to loft such praise, but his team has put together a year that will be difficult to surpass on a scale of highs and lows.

On Saturday, Saldana’s squad clinched a berth in the Development Academy postseason with a 3-0 victory over Arsenal FC of Temecula, Calif. in a battle of the top teams from the So-Cal Division. With goals from Maxx Bauman, Jose Villareal, and Irvin Parra-Anaya, Pateadores sealed an automatic qualifying position as one of the top two teams from their division and now head to Frisco, Texas with the improbable hope of keeping the season alive for a few more weeks.

The immediate future may seem bright for the players, but it is how they arrived here that is the real story. Entering the 2010-11 season, Pateadores, as a club, was not viewed as much of a threat as both the U-16 and U-18 teams finished last in their division the previous season. The older group went winless.

With a roster overhaul and a new addition to the coaching staff, Pateadores surprised a lot of people in Southern California this year and began to challenge for a playoff position in both age groups midway through the season.

Then, the U-18 team hit one of the lows of the season, as it was discovered by U.S. Soccer the club had been using two illegal players. The players were deemed ineligible because they violated Development Academy regulations by playing for a junior college in the fall. The club was forced to forfeit the 16 points that had been accumulated during the duo’s 11 game spell.

A harsh blow to the remaining players for what the club called an ‘administrative error.’ With only nine games remaining on the schedule following the news of the forfeits, Pateadores was very likely heading towards another season at the bottom of the table.

But the team refused to believe in the ‘likely’ happening and refused to succumb to another season of bottom feeding. In what the head coach described as a ‘bunch of players coming together and showing their maturity,’ the team bonded and rattled off a remarkable eight wins in the last nine games and finished the season tied for first in the ultra-competitive So-Cal Division.

“Credit the boys because they could have easily used [the forfeits] as an excuse, but they accepted the challenge,” Saldana told Goal.com after his team’s regular season finale on Saturday. “We wrote one of the final chapters today. I am super proud of them.”

It was only one of the final chapters though. Pateadores has its eyes on a bigger prize in the coming weeks.

“Certainly, climbing this first mountain and getting into the playoffs was a huge accomplishment,” Saldana said about the team’s goals heading into the playoffs. “But these guys have a title on their minds and they have felt through the season they are one of the best teams in the country.” 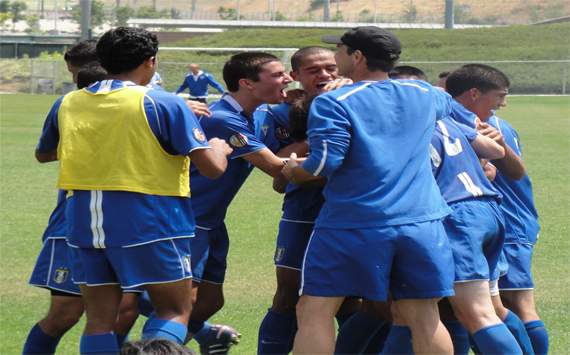 “I have told the players, ‘you guys are the best team in the country to me,” assistant coach and former U.S. international Thomas Dooley told Goal.com on Saturday. Both coaches also emphasized that this is a collective team more than anything and that it is not just one player who has stood out by himself.

And despite the spell of positive results, head coach Saldana said nothing changed in the playing style or the goal of helping the players develop from day one of the season to the final day.

“We sent numbers forward, we didn’t sit back for 1-0 results,” the former UCLA head coach said. The attacking push led to 22 goals over the final two months. “We just want to keep doing what we have done all season, we just have a bigger stage to do it now. These guy are not afraid of competition.”

“I told the players, ‘I not here to b.s. you,” the former U.S. national team defender said. “If you are making mistakes, you will be on the bench. It is a competition where you have to compete with all of your teammates for playing time.”

“This is the level where they are. It is not AYSO or club soccer anymore where you [have free substitution],” Dooley continued with an emphasis on the mindset players need for the Development Academy. “So when they make a mistake, I let them know what it is. Again, I like them, but I am teaching soccer.”

Dooley has complimented Saldana seamlessly on the sidelines, and the two have made the most of the card they were dealt in retrospect.

“We enjoy [overcoming adversary],” Saldana said when asked about how the two coaches previous experiences at various levels have helped with the circumstances this season. “We like the pressure situations because that is what you coach for at the higher levels.”

The coaches will get a little added pressure in the dry, Texas heat this week when their team begins post-season play as one of the lowest seeded teams at the event due to the substantial amount of contests forfeited – perhaps to their benefit, they certainly enjoy defying the odds.

J.R. Eskilson is the Youth Soccer Editor at Goal.com. If you have a comment or an idea for a story, you can email him at jr.eskilson [@]goal.com. Or follow him on Twitter @NCAAsoccer