By Matt Rybaltowski
HOUSTON -- Just a few minutes remained in Wednesday's exhibition between Manchester United and the MLS All-Stars when Javier Hernandez defeated the offsides trap, received a deep pass from Paul Scholes and expertly one-timed a chip over goalkeeper Nick Rimando with the side of his right foot.

The 22-year-old barely celebrated moments after the ball bounced into the net, but the pro-Mexican soldout crowd at Reliant Stadium serenaded him with a rousing applause. "Chicha! Chicha! Chicha!," they chanted for the 5-foot-9 striker nicknamed 'Chicharito' or 'little pea'. It was the second loudest ovation he received of the night.

The first occurred earlier in the second half when Hernandez made his Manchester United debut. As he entered the pitch in the 63rd minute, young female fans flashed "We love Chicharito" posters and others waived the Mexican flag. One fan wearing a red, white and green Mexican wig jumped for joy.

But once Chicharito leaves his home continent, he will enter a considerably less friendly environment.

Expectations are heightened for the striker after a breakthrough performance in the FIFA World Cup and Wednesday's impressive debut in the 5-2 win. Hernandez will be the first Mexican to play for the Red Devils in the Barclays Premier League and must overcome a multitude of social and cultural barriers overseas. He also must find a way to fit within the framework of Sir Alex Ferguson's offense, built around the scoring prowess of Wayne Rooney.

"The pace of the league is different, the demands of the club are going to be huge and the quicker he adapts to it will be very important to him," said Juan Pablo Angel, a Colombian striker from the New York Red Bulls, who faced Hernandez Wednesday night.

Angel himself took an extended period to settle in England when he signed for Aston Villa, notoriously wearing his hair long because he couldn't speak enough English to tell the hairdresser how he wanted it cut.

Hernandez was unavailable for comment after the All-Star Game, as he sprinted past reporters in a mix zone outside the Manchester United locker room and flashed a smile. Chichaito's reluctance to speak to the Mexican press was odd, considering the adoration he received during the All-Star Game festivities. Earlier in the week, hundreds of fans reportedly lined up at 7 a.m., hours ahead of Hernandez's scheduled appearance for an autograph signing.

He lived up to the hype in his limited playing time, providing instant offense. Less than five minutes after entering the game, Hernandez nearly capped off a sliding attempt to score after a well-timed far-post run. In the 70th minute, he set up another goal, drawing a foul 30 yards from the box after swiping the ball from MLS defender Wilman Conde. During the World Cup, Hernandez was clocked as the fastest player of the tournament, and Ferguson believes he can provide an added element of speed to the offense.

"One thing defenders always worry about is players with speed and of course when you see his goal (last) night there’s an indication of that," Ferguson said. "(With) the timing of his route coming towards goal he's got an effect on the defenders, no question about that."

In a 3-1 loss to Argentina in the Round of 16 at the World Cup, Hernandez fended off defender Martin Demichelis in the box, quickly turned and sent a scorching left-footed blast into the upper netting. On Wednesday, he played mostly with his back towards goal in a holding forward capacity in tandem with forward Danny Welbeck. Ferguson also has the option of using him with 18-year-old striker Federico Macheda, another rising young star, who had two goals against the MLS All-Stars.

"I think we can work great together," Macheda said. "He’s a good, young striker so I'll be happy to work with him." 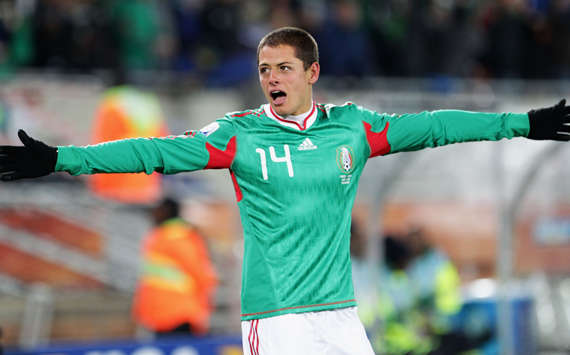 Ferguson admitted afterwards that he still needs to determine how to use Hernandez in combination with Rooney, who finished second in the Premier League last year with 26 goals. He did not indicate if he plans to use Hernandez in a starting capacity or off the bench to start the season. Suddenly, Ferguson has a number of options at striker to complement Rooney with Hernandez, Macheda and Dimitar Berbatov.

"On the combination with Wayne, I think we need to adjust it a little bit because both can be similar types of players," Ferguson said. "There's still some things to do, but I think once (Hernandez) gets used to training he'll be OK."

Bruce Arena, the coach of the MLS All-Stars, lauded Manchester United's global scouting system for identifying Hernandez's talents at a young age. The club paid a £7million transfer fee to Chivas de Guadalajara in April to land the striker. Although Hernandez tied for the Mexican First Division scoring crown in the Bicentario (second tournament of the season) with 10 goals, Arena believes he will have to overcome a steep learning curve in England.

"He's not going to step on the field and accumulate a whole lot of playing time in the early going, but one would have to believe he's going to turn out to be an outstanding player," Arena said.

Despite the challenges, Angel thinks there is a strong chance Hernandez can meet the expectations.

"He's going to a place where they're going to take care of him and make sure he gets all the right care," Angel said. "Hopefully he will adjust to life and the pace of the game over there.

"He has the ability."