By Subhankar Mondal
Can Jose Mourinho inspire his new club to a victory against his old one?
Kick-Off: Tuesday, March 16, 2010, 20:45 CET.
Stamford Bridge, London, England.

Basking In Hope And Expectation

At the start of the season Chelsea were one of the favourites for the Champions League trophy, and indeed they have looked good in Europe this campaign, although suspicions persist as to whether they were truly tested in the group stages. Therefore, Inter were their first main test in Europe's premier club competition and they did expressed their calibre and quality a fortnight ago.

Inter might have won the first leg of their Round of 16 tie 2-1 in Milan, but Chelsea weren't particularly bad and do have a valuable away goal, which Carlo Ancelotti and the rest of the Chelsea unit will be quick to point out as a potentially crucial factor in how the two sides approach the game on Tuesday evening. Chelsea know that they have to score to progress, while a draw will be good enough for the Nerazzurri.

The Premier League side have failed to make it to the semi-finals only once in the past six years and reached the final in 2008. Last season the Blues were knocked out in the semis by Barcelona on the away goals rule. Chelsea are going strong in the Premier League this campaign too, as they are currently second in the table, two points behind leaders Manchester United with a game in hand.

Inter have not gone past the Round of 16 in the Champions League for the past three seasons and in each of the last two campaigns they have fallen to English opposition. Last season they went out 2-0 on aggregate to Manchester United as a 0-0 scoreline at home was followed by a 2-0 defeat at Old Trafford. In 2007-2008 it was Liverpool who knocked them out.

But this time Inter do have a genuine chance of progressing in Europe's top tier club competition. They might have conceded an away goal, but they have a one-goal advantage going to Stamford Bridge. If the Italian champions of the last four seasons can strengthen their backline and soak up pressure playing in a traditional Italian style, then they will be confident of getting a 0-0 draw and going through.

Jose Mourinho never lost a league game at the Bridge when he was the coach of Chelsea, losing only once there in all competitions, and this will be his first return to his old stomping ground since leaving the Blues in 2007. He has proclaimed his affection for Chelsea but will certainly be looking to knock out his former club. 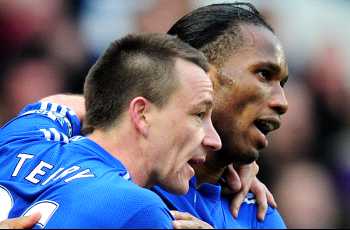 Yuri Zhirkov and Deco should both be available after having recovered from their respective injuries. Jose Bosingwa, Ashley Cole and Michael Essien are long-term injury casualties, while Ricardo Carvalho is out with a hamstring injury. Both Petr Cech and Henrique Hilario are suffering from injuries, meaning that Ross Turnbull could be given a start.

Cristian Chivu is out with injury but Marco Materazzi is back. Davide Santon was not part of the Inter squad that lost to Catania on Friday and doubts persist on whether he will be taken to London. Mario Balotelli, who has struggled with injuries in recent times, is reportedly out of the squad for Tuesday's game.

The Ivorian international striker has been in excellent form so far this season and has 21 goals and six assists in 24 Premier League games, with three goals in the Champions League. He wasn't perhaps very prominent in the first leg against Inter at San Siro but Drogba will certainly be a huge threat at Stamford Bridge. Inter's otherwise strong defensive unit exhibited cracks on Friday night when they conceded three goals in Catania and the Drog, placed sixth in the Castrol Rankings, will be eager to take advantage of any defensive slip-up on Tuesday evening.

The much under-rated Argentine international striker scored in the first leg in Milan and made England international central defender John Terry look average. Milito has scored 16 goals and given three assists in 26 matches in Serie A and has struck twice in the Champions League. The 30-year-old has not accomplished much in Europe and as such he will be keen to light up the continent. Milito's attacking instincts, shooting accuracy and ability to hold the ball up and bring his team-mates into play will be an important feature for nter against a confident Chelsea side.

Chelsea will probably be the favourites in many Premier League fans' eyes given that they are at home and have a priceless away goal, but Inter have the Jose Mourinho factor. The Portuguse coach knows what to expect at Stamford Bridge and knows how to grind out results. The former Porto boss won't necessarily be looking to set out an attacking team against the Blues on Tuesday and will be keen on his players performing the way they did at home.