By Allen Ramsey
Through six games under its new coach, the United States hasn't looked like a team that will win many games.
It's becoming a routine for Jurgen Klinsmann's United States side to take 1-0 loss. A frustrating routine, but a routine nonetheless.

Following the team's recent 1-0 loss to France - its fourth defeat with that scoreline in six games under the new coach - American forward Jozy Altidore had some words about about his new-look squad on Twitter.

"Not satisfied with the 'it was a good experience' line anymore, we need to be better. #simpleasthat," he wrote.

Altidore, who had arguably his best non-goalscoring performance for the USA in that loss, has a point. The USA should reasonably expect to pick up results with more frequency than it has recently. Even against solid teams. But the loss to France, in Paris, shouldn't have been the tipping point.

"Playing against France, one of the best teams in the world, it was always going to be a tough game, everybody knew that going into the game," injured USA midfielder Stuart Holden told Talksport. "Yes, it is a great experience, but I agree 100 percent with Jozy that the experience can't be enough these days, we need to start pulling results out and competing with the best teams."

Holden and Altidore have the right spirit. The USA should never line up in a match without the hope of pulling out a positive result. But the France game showed that those expectations are still not all that close the reality of the situation as it stands right now.

Had these comments been made after the losses to Costa Rica and Ecuador it would have been understandable, and those games likely played into the frustration that brought them out. But the France match was a different beast, and in hindsight, showed a different truth.

The USA should be getting more results, but the nation is still not ready to expect regular wins against the best teams in the world.

"For the most part, France dominated," Holden said later in the same interview. "But at the same time, the U.S. showed some good signs during the game. France had a tough time breaking us down."

Being hard to break down is a good thing. The USA proved once again against France that it can be a hard team to beat, but being hard to beat is not the goal. The goal is to be the type of team that it's easy to lose to, and right now the USA is not that. 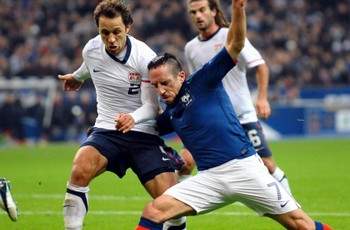 The midfield, which largely carried the USA through to the round of 16 in the World Cup, was utterly outclassed against France.

Maurice Edu, who has been charged with being the engine of the team, wasn't able to assert himself against a very talented French midfield. Kyle Beckerman, tasked with disrupting play, offered very little support going forward and was a liability with the pressure France put him under when he had the ball. Danny Williams is clearly struggling to settle down on the right side and Brek Shea, who seems to have solidified his spot on the left, was pretty much invisible.

The problem, once again, came down to the USA's inability to hold onto the ball and move forward as a unit. Altidore looked good in spurts, but he was isolated and rarely had the support needed to really cause problems. Add to that France putting a clear focus on not allowing Clint Dempsey time to create, and Les Blues put together a pretty simple blueprint for how to beat the USA.

That blueprint is easy enough for teams that have superior talent to follow. Defend from the front and the USA will still lump balls forward, and with just one forward holding the line, the numbers game will tip in your favor. Eventually, when the USA continually fails to keep the ball and ends up defending for 60 minutes, you'll find a crack or two and the goals will follow.

That's because it's nothing new. This, like it or not, is the reality of the talent level of the team, and can only be changed marginally by the tactics of a coach.

Klinsmann will come under fire if the results don't come when World Cup qualifying starts and if he stays glued to the same group of players. But for all of the questionable moves he's made - most notably the continued exclusion of Michael Bradley from the starting side despite what appears to be sub-par performances by his direct competition - Klinsmann didn't do much wrong against France. He simply doesn't have the players to execute the free-flowing style he favors against the top teams in the world.

So, instead, he set the team up to be hard to beat.

It may not sit well with Altidore, Holden or any number of fans across the USA, but get comfortable with being hard to beat, because being easy to lose to is still a long way off.