In the 11th minute of the match Messi showed why he is one of the top players in the world. He received the ball in space on the top of the U.S. box and pushed forward. As the defense flocked to him a seam opened to his right. He delivered the ball to Angel di Maria, who was streaking through towards net. Di Maria’s shot went wide to goalkeeper Tim Howard’s right. It was one of the many opportunities created by Messi throughout the match.

Perhaps his go on goal in the 38th minute defined the night. After the U.S. lost the ball on their own side of the pitch, Messi raced down the field past Michael Bradley with ease and delivered a shot on keeper Tim Howard before the U.S. defense could collapse on him. The shot went for not, but he made his point. No American defender was going stick with him on the night.

Argentina broke the deadlock in the 42st minute when the ball was played over the top of the U.S. defense. Messi controlled the ball, strolled along the goal line on the left side of the net and delivered a pass to Angel di Maria, who fired on goal from point blank range. Howard made the save, but the ball was punched out to Esteban Cambiasso who put Argentina on top.

Messi danced all over the United States side of the pitch in the first half, doing whatever he wanted at will. Whether it was a give and go pass or a burst of speed followed by a quick touch, no defender could compete. 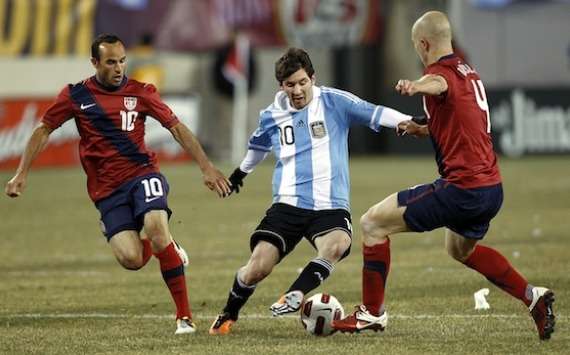 The Argentina striker combination of di Maria, Lavezzi, and Messi proved just a little too much to handle. Midfield possession led to opportunity after opportunity for their front three. Time and again the ball was played over defender Jonathon Spector’s head, who could not hold his own under the relentless pressure. Timothy Chandler would replace him at half time.

A bright spot for the U.S. was goalkeeper Tim Howard. While the Argentina front sliced past the back four of the red shirts, Howard was there time and time again to prevent a disaster. His brilliance in preventing the first shot by di Maria in 42nd minute could have kept a tie intact going into the locker room, but an unlucky rebound to Cambiasso left the U.S. down a goal at half.

The second half contained much of the same brilliance from Messi. In the 61st minute he might have taken on five U.S. defenders with a number of breathtaking moves before being fouled right outside the 18. The free kick left the sellout crowd at New Meadowlands in an uproar, begging referee Roberto Garcia for advantage to be played Messi took the resulting free kick, bending the ball just over the goalpost to Howard’s right.

Feisty play by the United States in the second half prevented Messi and Argentina from obtaining a win, but the Barcelona star was clearly the best player on the pitch.