Jon Arnold
Goal takes a look at five storylines from Tuesday's World Cup qualification match against Panama, including the pressure on the forward and a position of weakness.

PANAMA CITY —  It was a proper Central American experience for Mexico on Tuesday night. The field was soaked after a day full of rain and the crowd was packed into the stadium celebrating not just their national team in a month but also payday.

"For a team whose style of play is to build and to have long sequences of passes, the field was impossible to play," Mexico coach Juan Carlos Osorio said after the game.

But while Mexico wanted more out of its scoreless draw with Panama, Osorio will be happy that his team got a result that will serve it well as it looks to qualify for the World Cup without any of the extra steps it took last time around.

The Hex is a long process, and Mexico is off to a good start. Let's take a look at a few positive things and a few negative things that emerged from Tuesday's game: 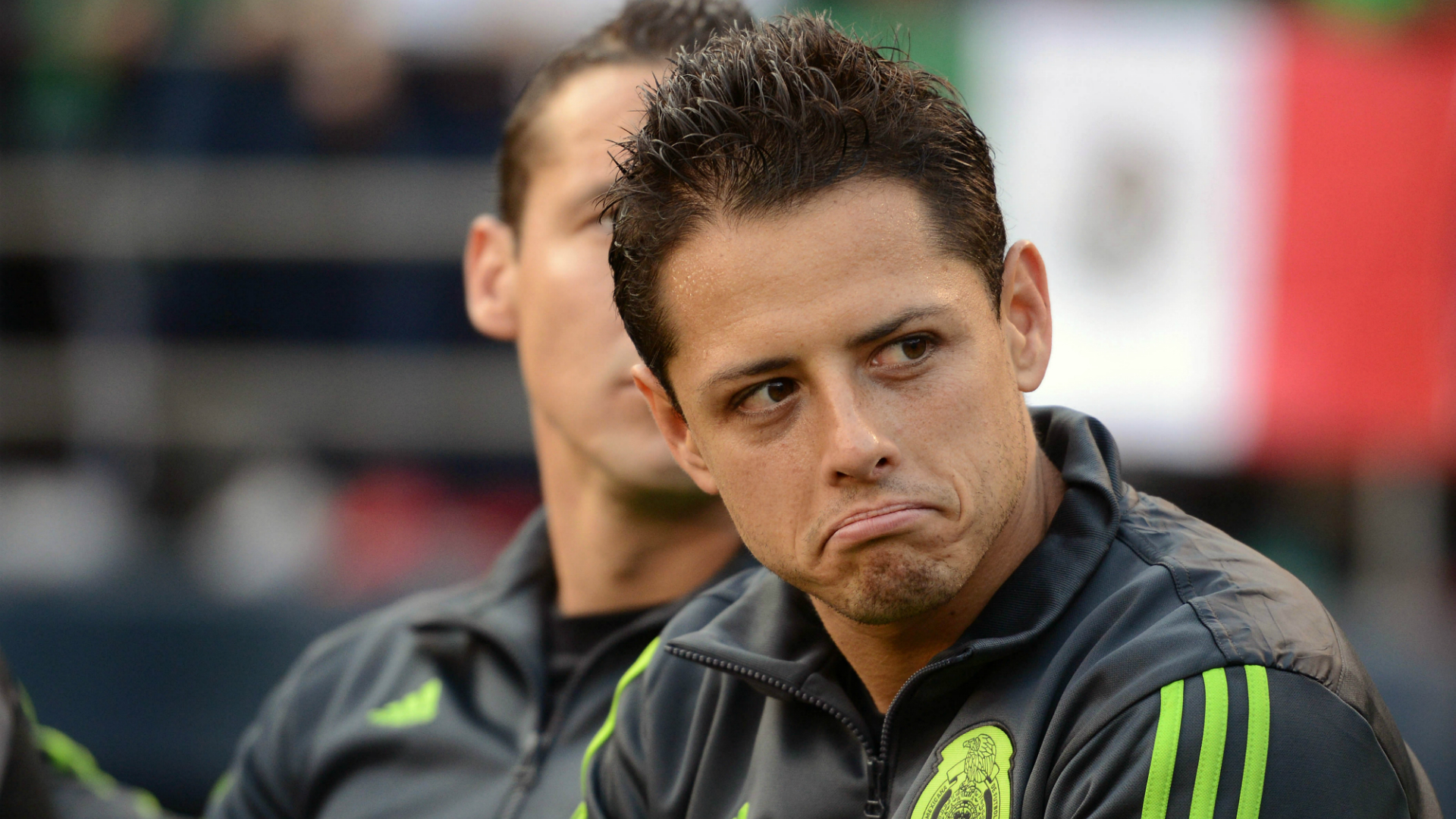 Mexico forward Javier "Chicharito" Hernandez's hunt to become his country's all-time leading goal scorer will extend into 2017, something that seemed unlikely in the spring of this year. But his production has slowed, so much so that he now is in danger of passing Jared Borgetti's 46 goal tally when he's played more games than Borgetti rather than fewer.

Chicharito's last goal for Mexico came in a Copa America Centenario group game against Jamaica, his only goal of the tournament. Injury kept him out of matches since then, but he's now gone four consecutive games without scoring.

Like in the first match of this window against the U.S., he hardly had any chances Tuesday, and that's not all his fault. His movement wasn't as good as it was in Ohio, though, and his teammates struggled to find him with Panama pressuring at any occasion and making it tough to get good service to the Bayer Leverkusen forward.

While there's a tactical answer for why the 28-year-old didn't see more of the ball, you also wonder if the psychological pressure of making history is entering into his mind.

"It would be really lovely for me to be able to do it in tomorrow's match or whenever it might be. It's something I'm not worried about, how quickly the record arrived. It's taken a while, that's how life goes, that's how soccer goes," the forward said before the game.

It's fair to say that scoring droughts happen in the sport, and four games isn't even a  particularly bad one. Chicharito eventually will score many more than two more goals and be Mexico's top scorer. For now, though, Mexico could use more from it's central forward, whether or not he's trying to make history.

CENTRAL MIDFIELD A POSITION OF WEAKNESS 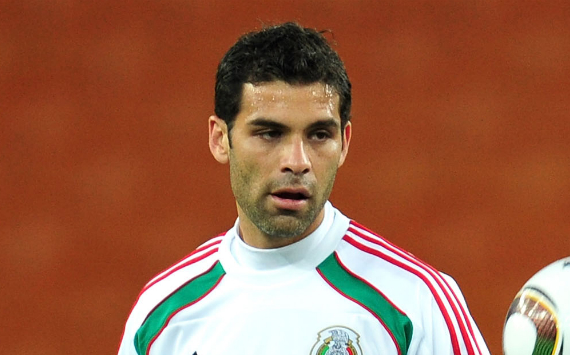 When El Tri's starting lineup was announced Tuesday, there was a bit of uncertainty about how the team would line up - just as there was Friday against the United States. The lineup could've seen Rafa Marquez play as a defender, but instead he was back as a defensive midfielder, the role he'd occupied for the last portion of Friday's win. While he again wasn't bad, he was not the first choice there for Osorio and did little to give the impression that he should be going forward.

"At the end, we tried to play our style but the opponent also factored in a lot," Marquez said. "They pressured us well, were very aggressive and the ref let some tough plays go, but I think we’re satisfied with the result."

The result came in spite of the man to his side, however. Jonathan dos Santos had a nightmare first half, losing the ball and making bad passes on the sloppy field at the Estadio Rommel Fernandez. The Villarreal midfielder seemed like the perfect player to come into the middle, with Andres Guardado out injured and Hector Herrera coming off a disappointing performance in the U.S. He eventually settled into the game in the second half, but was fortunate his first-half issues didn't result in a Panamanian goal that would've changed things significantly.

Somehow, despite having four players playing for top-tier European clubs in the position, central midfield looks like an area of concern for Mexico. Guardado should be back for the March games, but can Herrera rediscover the form he showed in the 2014 World Cup only to drop off significantly for Mexico? Can Dos Santos settle in on the international stage? The 37-year-old Marquez isn't the long-term answer there. Osorio will need to find someone who is. 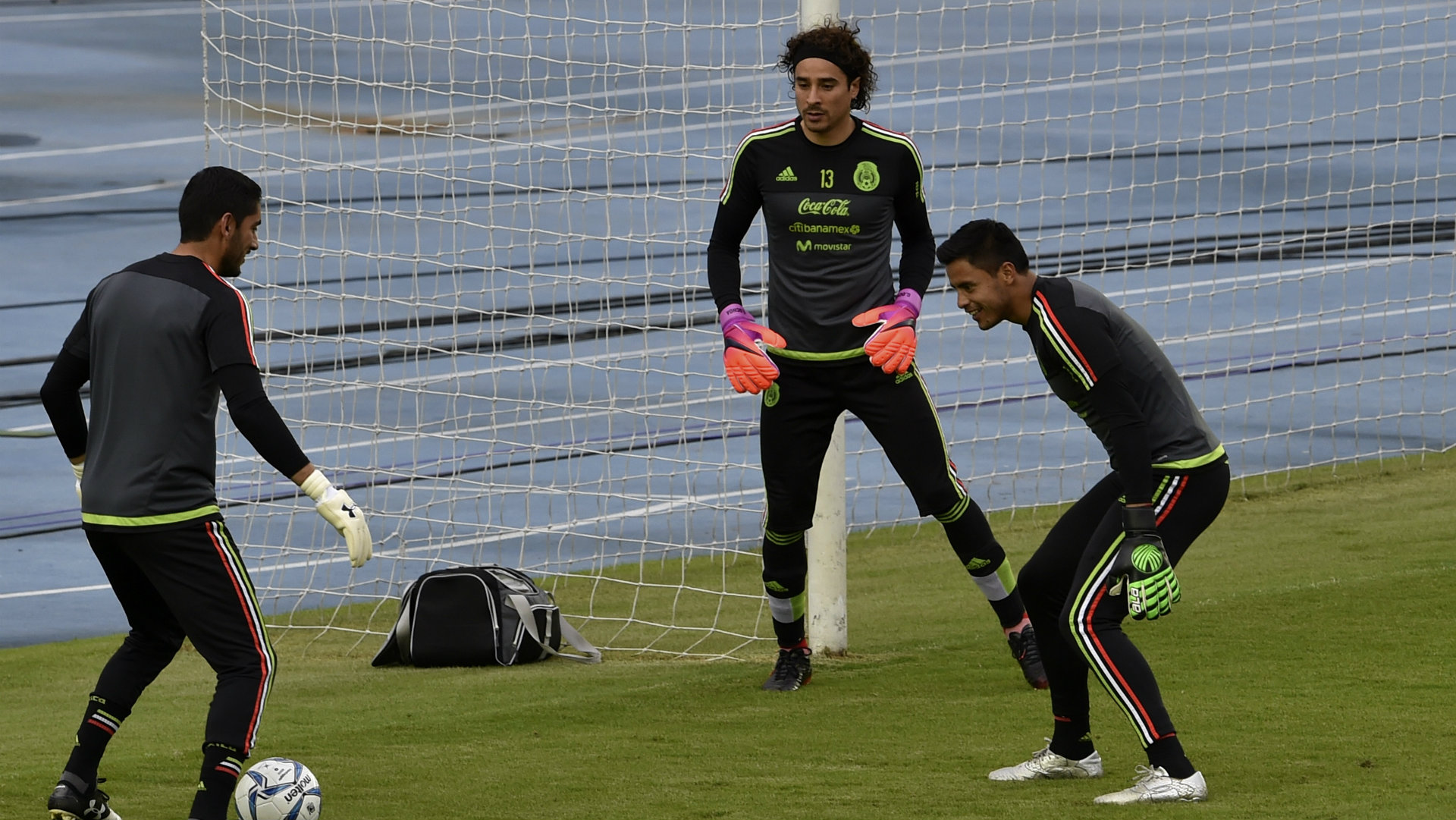 Mexico coach Juan Carlos Osorio generally highlights a basic principle the opposition will employ as the main thing he's looking out for. For the U.S. it was aerial play. For Panama? It was the rapid transitions the team can make from defense to attack.

So how did Mexico do in the scoreless draw? The performance probably should earn a C+. Panama wasn't able to score goals, but a lot of that came down to excellent goalkeeping from Guillermo Ochoa on a night when a wet ball would've seen lesser goalkeepers struggle. Panama's midfielders were good, with Amilcar Henriquez able to step in for the suspended Armando Cooper without a noticeable drop-off. Mexico was hit both early and late but controlled the ball well enough in the middle, despite the water-logged field, to prevent Panama from finding a goal that would've sent the sold-out crowd into euphoria.

One side note: The crowd is often known as the twelfth man, but the biggest help in the Estadio Rommel Fernandez for the home team Tuesday might have been the ball boys. When Panama would win a throw-in, the ball boys would immediately toss their countrymen a dry, fresh ball, ready for an Adolfo Machado long throw. When Mexico won a throw-in, the children would roll the ball to the player, causing it to become wet and slick. The heads-up training nearly paid off in the first half when Panama won a corner and the ballboy sprinted to place the ball. Panama forward Blas Perez realized hardly any defenders were back, and called for the kick to be taken quickly. It was, but enough Mexicans had scrambled back to avoid danger.

Osorio was right about the quick transitions, but it's unlikely even he had prepared for the adolescents around the field to be part of Panama's action plan. 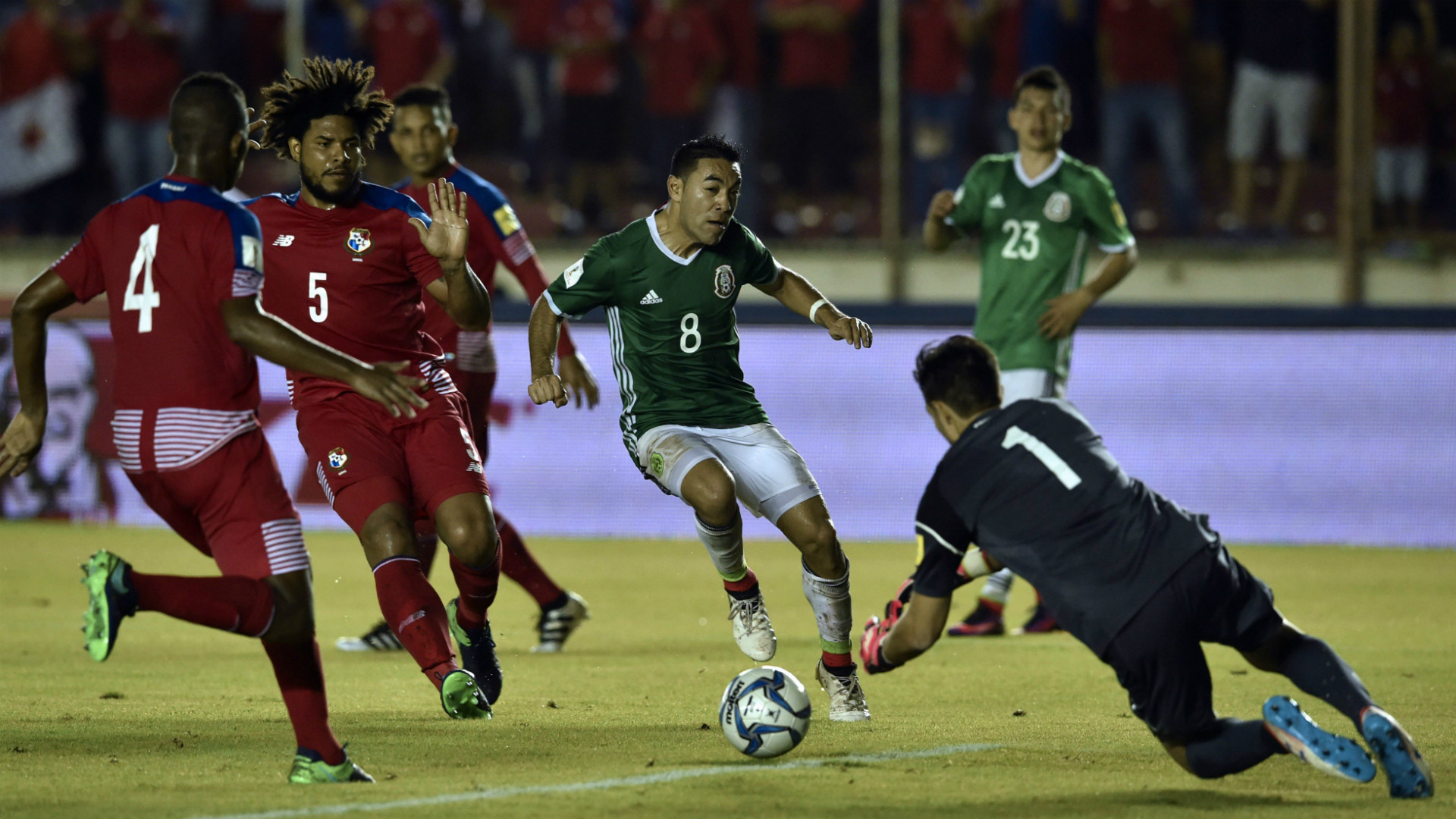 Mexico's strategy going forward often is to overload one side of the defense, then once players on the other side of the field have been isolated to switch the point of attack (or not depending on how much space you get or how slowly teams adjust). That was on display Friday in the win against the United States with Miguel Layun and Jesus Corona putting pressure on the right side of the Americans’ defense. But Mexico couldn’t replicate the same intensity on the left in Tuesday’s draw.

Layun was far less effective Tuesday, and while it would be easy to blame Marco Fabian, who stepped in for Corona on the left wing, most of the credit goes to Panama. Alberto Quintero got forward well to keep Layun defending and Adolfo Machado was calm and controlled in dealing with players getting forward. Center back Roman Torres came over when needed and, perhaps most importantly, there was a combination of Panama denying the opportunity to make passes and Mexico spraying the ball to the Canaleros when the pass may have been there.

"We knew they were going to play this kind of game. It’s one of the toughest places to play in the Hexagonal," Fabian said. "They had a good showing, but I think we fought with a good attitude. We couldn’t find a goal, but we also didn’t concede one."

The left wing will continue to be a dangerous place for Mexico's attack, but it was neutralized last night - part of an excellent game plan from Panama coach Hernan Gomez. 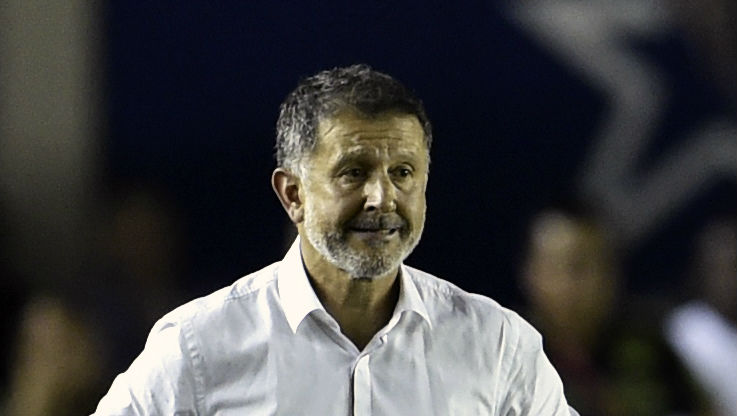 In one of those hypotheticals that seem to bring everyone back to Earth, most everyone would agree that, "If you'd gone in knowing you'd get four points from these two games, you'd have taken it immediately." That's definitely true of this Mexico window. Starting the Hex with two games on the road isn't easy, and it won't be easy to face Costa Rica in March. Mexico had aspirations to start the Hex with six points. But ultimately, this is a good return from these matches.

"We think this is a good point that we added to the three points we got against the United States," Osorio said. "With the two away matches, it's a good start to me.

"In our plans, we've thought that if in every away date we can get points like that, we'll easily qualify. We believe it was a good start, we're leaving satisfied and with a lot of optimism in the process of achieving our goals. It's started well and the players go out with the confidence that we can keep getting results."

The Ticos' flying start, getting two wins from two games, takes a bit of luster off Mexico (and Panama) starting with four. With eight games remaining, though, there's plenty of time for things to shift, and they always seem to do so in the Hex. Mexico could go to the top of the Hex as soon as March with a win in that window enough to surpass its point total with Chepo de la Torres after seven games in the last cycle.

"The next matchday is going to be a great chance to compete to be first in the table, and it's a product of these four points," Osorio said. "We played away and we've got this advantage. It leaves us with the hope that we can get there, as we hope to get to the World Cup."

If these first two games are any indication, that won't be a problem for Mexico.