Michael McColl
The FC Dallas center back has made the most of his new contract to establish himself as a key starter for the Supporters’ Shield winner.

It's taken Walker Zimmerman four seasons, with a lot of battles and competition along the way, but the former Generation Adidas center back has now firmly established himself as a starter with FC Dallas.

After three years on the fringes with sporadic starts for the 23-year-old defender, this season was a breakout campaign as he played a pivotal role in Dallas becoming the Supporters' Shield winner.

It was nearly all so different for Zimmerman and Dallas. The two parties were involved in a contract negotiation for much of the offseason after the defender's Generation Adidas deal expired at the end of 2015.

A new contract appeared close but Zimmerman spent the winter on trial with various clubs in Norway and Sweden, and a move to Europe was looking likely before Dallas put a deal in place in February to secure the defender's services for another few years.

It's a move both sides will be glad they sealed. Known for his mobility, Zimmerman claimed a starting spot from the first game of the 2016 season and never gave it up, going on to make 30 starts. Zimmerman helped the team record 11 clean sheets while also adding four goals at the other end of the pitch, three of them game-winners.

The best producer on the Dallas back line, Zimmerman was third in MLS for clearances (157), third in aerials won (99) and fifth in interceptions (101). He's still young, and in some areas still raw, and he was put the test a lot this season but came out the other side stronger and looks to have a long future in the game, wherever that may take him.

For a solid season that's seen him establish himself as a firm starter for the Supporters' Shield winners, Walker Zimmerman has won Goal's Defender of the Year award. 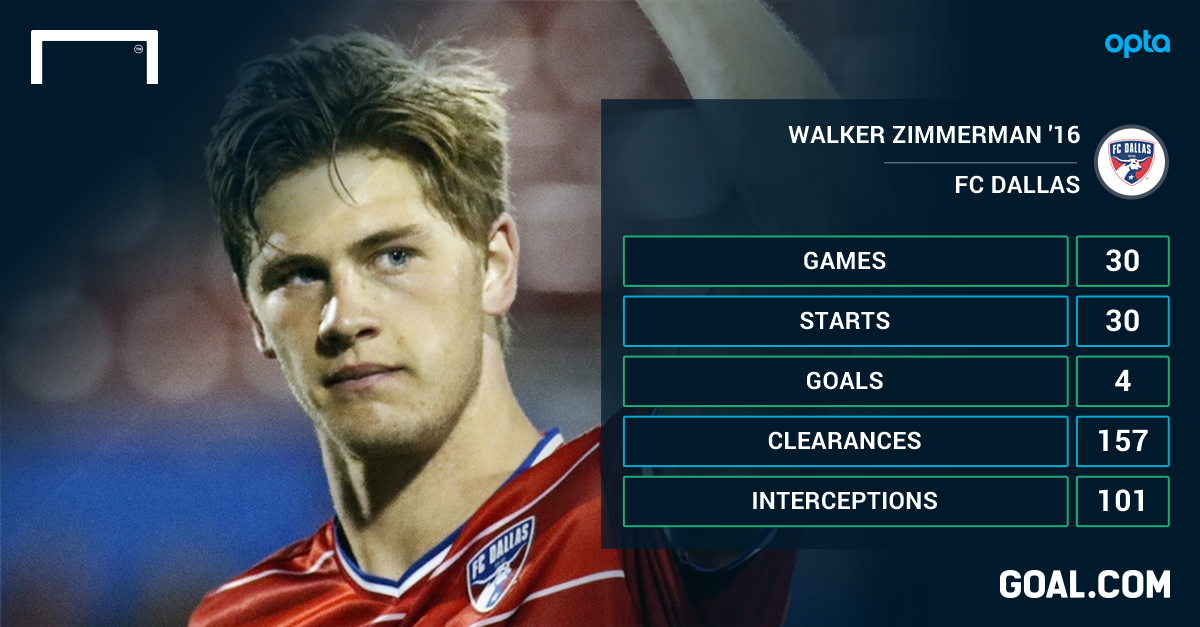 Jelle Van Damme: Zimmerman may have taken the Defender of the Year honors, but he was pushed all the way by the LA Galaxy's big Belgian center back. Van Damme had an excellent first season in MLS, making the transition from left back to becoming the key anchor in the middle of the Galaxy's defense. With 28 appearances, and four assists, the 33-year-old was third in the league with blocks (27), and in the top 12 for interceptions (95) and clearances (132).

Matt Hedges: Zimmerman's Dallas teammate, and club captain, had another solid season for the Supporters' Shield winners, despite being forced to miss just over a month following surgery for a torn meniscus in April. The 26-year-old center back's consistent performances in the Dallas back line helped the team to the fourth best defensive record in the league, and FCD kept 11 clean sheets in Hedges' 26 starts.

Axel Sjoberg: Selected 14th in the first round of last year's MLS SuperDraft, Sjoberg has enjoyed an impressive rise with the Colorado Rapids. He settled into the league quickly and already looked the part after his rookie season, continuing to build on that this year with 31 starts for the league-leading Rapids defense. Sjoberg's biggest strength lies in his aerial presence: The 25-year-old was second in the league in clearances (162) and headed clearances (96) while adding two goals at the other end of the pitch.

Steve Birnbaum: The 26-year-old U.S. international had his best individual season in MLS, despite D.C. United's up and down season defensively, leading the league in aerials won (105). Birnbaum didn't have the strongest sophomore season in 2015, but Ben Olsen's faith in the center back was rewarded this year with strong defensive performances in his 26 starts, adding three goals and two assists along the way.