Rudi Schuller
The Spanish legend petulantly lashed out at TFC pest Armando Cooper on Sunday in an incident that should have seen Villa suspended.

Did anyone really expect any different?

On the same day that MLS announced David Villa as a finalist for its Most Valuable Player Award, we get word from the league's Disciplinary Committee that the New York City FC superstar will not be suspended for his kick out at Toronto FC's Armando Cooper on Sunday.

Villa had a running confrontation with the Panamanian in the first leg of NYCFC's conference semifinal against TFC, with the two jawing and jabbing at each other throughout the hotly contested match. Things came to a head in the 20th minute when Villa appeared to kick the back of Cooper's leg after both men chased a high ball at midfield, resulting in the TFC player lying in a heap while teammates from both sides rushed over.

Despite having a perfect view of the incident, referee Silviu Petrescu saw nothing wrong with the encounter and allowed Villa to continue playing until he was substituted in the 79th minute. But after the match, online chatter and talk in the bowels of BMO Field remained focused on the Villa indiscretion.

“On any other day in any other league that player sees a suspension," Toronto head coach Greg Vanney said of Villa immediately following TFC's 2-0 victory. “It will be up to our review panel to make a decision. For me, it was pretty blatant. It’s just not something that’s acceptable.” 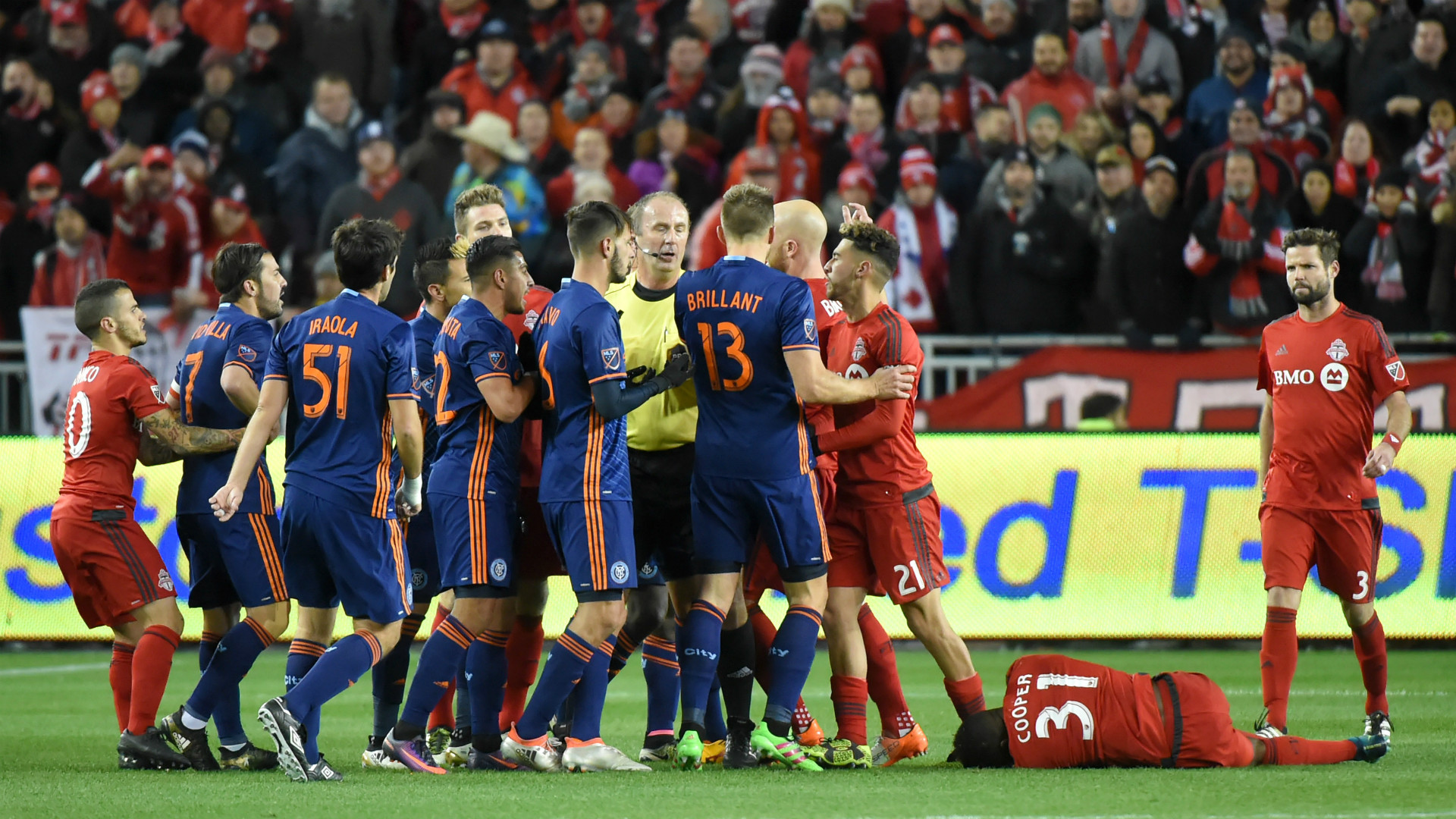 MLS disagreed, deciding that the kick-out was, indeed, acceptable when it chose to allow Villa to play in the second leg on Nov. 6. But the bigger story is that the league seems to be breaking its own precedent in allowing Villa a free pass on this.

Cooper, the very player the Spaniard lashed out at, was given a retrocative suspension for an off-the-ball kick to New York Red Bulls midfielder Felipe just six weeks ago. The Panamanian's indiscretion hardly made contact, but his intent was clear as he made a violent action toward a prone player.

He was rightfully given a one-game ban.

RE: Cooper-Villa from yesterday, important to note that Cooper was retroactively suspended for this kick out at Felipe. #TFC #NYCFC #RBNY pic.twitter.com/jsflHEnXt8

Yet here we are, not even two months later, and Villa's much harsher kick doesn't even warrant so much as a yellow card?

The Disciplinary Committee needs to do better here, not just for this particular series, but also to show that it treats all MLS players equally when it comes to aggressive or violent actions on the field. This is especially true as the panel somehow agreed, in it's own words, that "Villa's kick should have been punished by a red card," yet chose not to retroactively suspend him ahead for the high-profile second leg at Yankee Stadium.

Based on precedent alone, Villa should be spending Sunday in the press box. But mere hours after the World Cup winner was announced as a short-lister for MVP, did anyone really think he would get the same treatment as everyone else?