Ives Galarcep
The New York Red Bulls' win and Toronto FC's tie has left a three-way tie atop the East with a month left in the regular season.

HARRISON, N.J. — The New York Red Bulls clinched a playoff berth Saturday with their 1-0 victory over the Montreal Impact, but qualifying for the postseason wasn't exactly something the Red Bulls were interested in really celebrating.

What did matter more to the Red Bulls was the fact that, after starting the season in an improbable 1-6 hole, the reigning Supporters' Shield winners moved into first place for the first time all season.

"After seven games, it was a big hole that we dug and a difficult moment for us as a group, but we've always tried to use tough moments to make us stronger," Red Bulls coach Jesse Marsch said. "I think that's been a hallmark of this team is that, when things get tough, they respond. They don't back down."

Saturday's win was not the attacking showcase we have grown accustomed to seeing from the Red Bulls, but in some ways grinding out a 1-0 victory may have felt more satisfying, especially after the team's struggles with protecting leads.

"Once you get close to the end of the season, and the games start to mean more, and the playoffs are right around the corner, sometimes you have to win games like this," midfielder Dax McCarty said. "We've been pretty inconsistent in terms of how we've been able to close games out. For me, fantastic the way we stuck with the game. We really pushed it in the second half, probably could have had another goal or two, but to see out a 1-0 win, and an important three points, that's going to be great for our mental side of the game, and our confidence going forward." 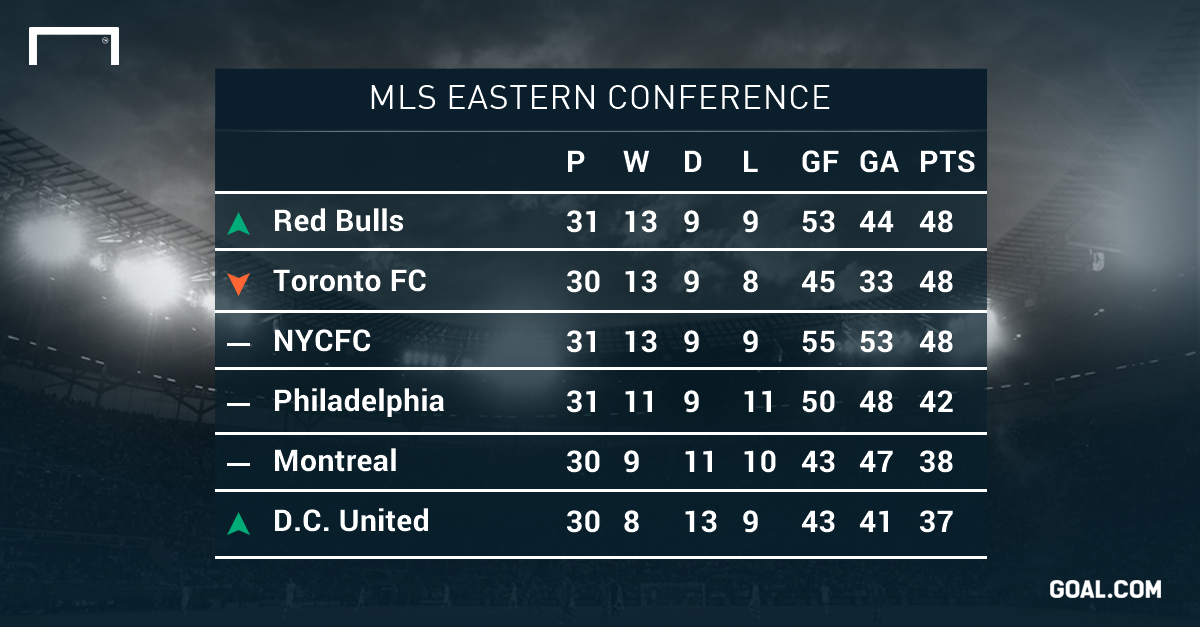 Saturday's win, coupled with Toronto FC's draw, and New York City FC's win against Chicago on Friday, has all three sitting with identical win and point totals. TFC has a game in hand, but has settled for a pair of draws at home in the past week, missing a chance to pull away from the New York teams.

The Red Bulls missed their own chance to pull away in the East after blowing two-goal leads in four of their past eight matches. Those late-game meltdowns have served as the Achilles heel for a team that could otherwise be considered the strongest in MLS.

The Red Bulls currently hold the tiebreaker atop the East via goal differential, but TFC has the advantage in the race to finish first. The Canadian club has the edge both because of its game in hand, but also because of the relative ease of its remaining schedule. Struggling Orlando City is up next for TFC, followed by a visit from D.C. United, a trip to slumping Montreal and a regular season finale against last-place Chicago.

NYCFC has a tricky schedule that includes a trip to face an improving Houston Dynamo, a trip to face United and a regular-season finale against a Columbus team that is far from a pushover.

The Red Bulls have the toughest road ahead, but they certainly have the quality to get through it. They face the Philadelphia Union in two of the three remaining matches, on either end of a trip to face Columbus. They also have a road trip coming up on Tuesday in CONCACAF Champions League action against Guatemalan side Antigua GFC, with a chance to secure a place in the knockout round.

That isn't an easy road, but the Red Bulls have consistently played some of the best soccer in MLS. Even with their recent late-game troubles, the Red Bulls are still sitting atop the East, are riding a league-best 13-match unbeaten streak, and haven't lost a match since a July 3 reverse to NYCFC at Yankee Stadium.

"We're 13 games unbeaten now, 16 in all competitions. That's okay to me, that's not bad," McCarty said. "We still have a long way to go, and obviously it's frustrating dropping points that you know could have you in position to win another Supporters' Shield, but we'll be stronger from those games, and I think tonight was a good step in the right direction."