By Ives Galarcep
With the Frenchman officially announcing his departure from New York, he is set to leave MLS an even bigger legend than when he arrived four years ago.
When the referee blew the final whistle on Saturday’s Eastern Conference final win for the New England Revolution, plenty of celebrating kicked off, but there was also a moment of respect for a legend. The scene helped shed some light into just what Thierry Henry has meant to his team, Major League Soccer and even the players who have lined up across from him.

Henry announced his departure from the New York Red Bulls on Monday morning, leaving the club after four and a half seasons. It came as no suprise really, and Henry revealed in his announcement that he had made the decision to leave before the 2014 season even began.

That may be why Revs players lined up to shake hands with the French legend before they began celebrating their own trip to the MLS Cup final, and why Red Bulls coach Mike Petke spoke of Henry as if he were a player who had already played his final match for the Red Bulls. 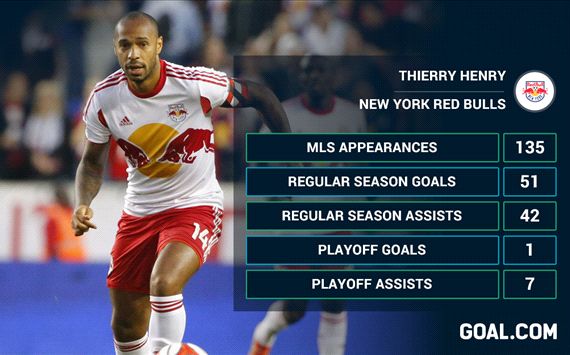 “I don’t think there will ever be a player in this league, there never has been, that has what Thierry has in all aspects,” Petke said. “I’m honored to have played with him, coached, and witnessed him every day in practice, the good and the bad times.

“Whatever he decides to do, he is going to be successful at whatever he does. It’s just been a phenomenal two years as a head coach to have a mind like that and a person like that.”

For Revs forward Charlie Davies, who had just enjoyed one of the best matches of his career, it was still important to pay his respects to Henry.

“I told Thierry it’s an honor to be on the field with him,” Davies said. “He’s a player that you always aspire to be. In his prime, with Arsenal, it really doesn’t get better than that. And to see him still, at 37, still play the way he does is unbelievable. Now he’s not really taking people on as much as he used to, but he can still read the game so well, and the balls he plays to give opportunities to his teammates is still unbelievable.

“I just made sure I said, ‘I’m so appreciative to get the chance to be on the same field as you. You’re an unbelievable player and I hope you’re still in the league next year.'”

For the Red Bulls, the end of the 2014 season feels like the closing of a chapter for a club that appears ready to try a new approach to team building — one not focused on big-name signings, but rather developing a core group and adding complementary pieces.

“I know exactly what I see, and I know exactly what our plan is, as we’ve talked about leading up to this,” Petke said. “I don’t think I’m ready to talk about that right now, but we have a very good plan for the future, and it is going to take understanding from our fan base, understanding from the media perhaps. We want to build something, I want to build something, and I think that we have a good idea of how to do that.

Why would the Red Bulls change up their approach and steer away from high-profile signings? It could have something to do with parent company Red Bull trying to reduce costs as it also has clubs in Germany and Austria to bankroll. It could also have something to do with the fact that teams like Real Salt Lake and Sporting Kansas City have shown that a better approach to team building in MLS is to focus on landing quality American signings will finding good value on the international market.

Such a move could make plenty of sense with Henry leaving, and if Tim Cahill leaves, which is a possibility. Replacing Henry will be virtually impossible, and if the team decides to build around the likes of MLS Golden Boot winner Bradley Wright-Phillips, then Cahill and his more than $3 million-a-year salary could become expendable.

Perhaps the Red Bulls have no choice but to shake things up considerably because of the void Henry is leaving behind. His quality, his leadership, his star power and his locker room presence helped cover up for so much these past four years that simply finding some other big-name player wasn’t going to cut it.

There just aren’t that many players with Henry’s cache, not to mention his dedication to MLS. During his four seasons with the Red Bulls, Henry completely bought into the idea of making the team a champion, and he pushed himself and his team in that direction for four years. He fell short in his quest, but in the attempt, he walked away a beloved figure and the most influential player in the club’s history.

That is why his coach was near tears Saturday, and why opponents lined up to shake his hand one final time. Henry arrived in MLS a legend back in 2010, and somehow did enough to live up to the hype, and even surpass the expectations placed on him when he arrived.
Close