By Kyle McCarthy
United will now push for a new stadium and a return to past glories with former player agent Jason Levien and media magnate Erick Thohir on board.
Over the past few years D.C. United has watched as its peers in MLS have surpassed the club on the field and its political overlords in the District restricted its ambitions off of it.

Second best simply isn't good enough for United. The club boasts too much history and too much pride to settle for a place in the middle of the pack, but it has struggled to muster the necessary capital and the necessary resources to alter the current landscape.

Those problems may soon dissipate after United welcomed current Philadelphia 76ers part-owners Jason Levien and Erick Thohir on board as investors on Tuesday afternoon.

United investor/operator Will Chang sifted through potential partners carefully and ultimately struck a deal that should significantly increase the club's financial and political clout. Levien offers critical local connections from his days in Democratic politics and as a lawyer at Williams & Connolly and useful working knowledge in sports management through his extensive ties with the NBA. Thohir brings plenty of money to the table – he even referred to himself as a 'rich uncle' in the new setup – from his vast array of Indonesian media holdings.

With the resources of all three men now on board, United now possesses greater clout to clinch the elusive stadium deal to remain in Washington. Securing a new stadium for United – despite the focus on finding a location for a second New York team – remains the most important infrastructure priority in the league right now. The addition of Levien and Thohir allows United to navigate the byzantine process with more options at its disposal and injects a locally-based investor into the mix to help push the process through until its conclusion.

The quest for a new stadium will take precedence in the short-term, but the long-term goals will likely involve burnishing the club's credentials in domestic and foreign markets. Other MLS clubs have overtaken United on both fronts as their investor groups used their greater financial and infrastructural reserves to obtain high-profile international players and sustain the type of on-field success United craves.

United has done well to reverse its fortunes on the field with the appointment of Ben Olsen and the savvy work to bolster the squad through the domestic and international transfer market. The arrivals of Levien and Thohir provide ample hope that similar success will occur off the field as United attempts to clinch a deal for a new stadium and strives to reclaim its place atop the MLS hierarchy. 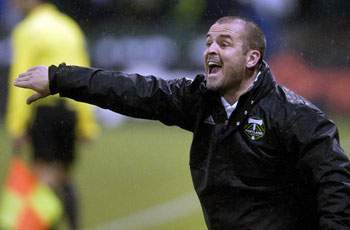 Concerns about the direction of the project in Portland prompted John Spencer's ouster after one-and-a-half years in the job on Monday.

Timbers investor/operator Merritt Paulson insisted in a news conference to announce the move that his decision was not driven by the team's record. Instead, he cited “fundamental philosophical differences” between Spencer and the current regime and refused to delve into further detail about the dismissal.

Those differences must have loomed as particularly significant to make such a drastic move at this stage of the Timbers' existence. Even though Portland has fallen short of preseason expectations and has struggled to produce results on the road, the currently available options on the coaching market – even after the season – suggests a significant rift beyond the less-than-impressive results.

While the particulars about the breakdown of the relationship between Spencer and the Timbers' front office remain somewhat murky, the appointment of general manager Gavin Wilkinson as an interim coach offers less uncertainty. Wilkinson has encountered some bumps along the way in his quest to build a playoff-caliber roster, but he can point to a significant level of success in the second division as he steps into the interim coaching role. He will need to lean on that experience and keep those bonds with Paulson strong in order to make it through the remainder of the season without too much fuss.

New England midfielder Kelyn Rowe will miss Saturday's visit by Toronto FC after he received a one-match suspension for his 87th minute challenge on New York goalkeeper Ryan Meara in Sunday's 2-0 victory over the Red Bulls.

Rowe did not receive a caution on the field for hitting Meara in the head with his shin, but the Disciplinary Committee deemed the play “a reckless challenge that endangered the safety of his opponent” and handed him the ban and the corresponding fine.

“We were surprised the play was being reviewed,” Revolution general manager Michael Burns said on Tuesday. “We are shocked by the decision and we disagree with it.”

The decision to sideline Rowe stands in stark contrast to the treatment afforded to Montréal forward Sanna Nyassi in a fairly similar (and perhaps more severe) clash with Portland goalkeeper Troy Perkins in April. Nyassi caught Perkins in the face with the bottom of his cleats as the two men vied for the ball on the edge of the Timbers' penalty area. Nyassi received a yellow card for the challenge, but he did not receive any further discipline from the Committee.

The disparate treatments afforded to both players in similar incidents underscores the Committee's apparent inability to achieve consistency in its decisions regarding supplemental discipline. It isn't a new problem, but the uncertainty sparked by such divergent verdicts continues to leave players and technical staffers without a clear and consistent blueprint regarding the type of conduct considered acceptable by the Committee on a weekly basis.

or shoot him an email.
Close