By Alex Labidou
In an exclusive sit down with Goal.com, Byrne reveals that the stadium is the crucial element of the team's MLS bid and says it has narrowed four areas where it will play.
NEW YORK – To say that New York cares more about the Cosmos than Major League Soccer is an understatement.

Tell most of the city’s residents that a soccer All-Star game was played this week in the area and there is almost always a bewildered response.

“The baseball game already happened a few weeks ago,” said one passerby not knowing that MLS’s best  faced Manchester United on Wednesday.

However, walking through the city streets, one iconic logo remains entrenched in the minds of most New Yorkers. The crest with a soccer ball in the middle surrounded by green, blue and yellow swirls had been worn by Pele, Giorgio Chinaglia, and Franz Beckenbauer during the team's initial run that lasted over a decade starting in 1971.

New York Cosmos’ Vice Chairman Terry Byrne has one solution to solving the indifference towards MLS in New York.

“Bring the Cosmos in,” Bryne enthused to Goal.com.

Since the Cosmos announced their intention of joining MLS in the summer of 2010, the interest in the club has been extremely high. The team has put together an aggressive marketing campaign with billboards in Times Square and promotional events throughout the city. In some ways, it almost appears if the club has become bigger than MLS despite not having any professional players.

Yet that draws some concern. Observers are beginning to wonder whether or not the Cosmos are just a brand that is more interested in selling jerseys and capitalizing off of the name of Honorary President Pele.

It was rumored that MLS Commissioner Don Garber was going to make an announcement prior to All-Star game about the future of the league’s 20th club, a decision has been delayed after no news was announced on Wednesday.

Byrne believes that there is a lot more substance than style with his club and addressed those concerns and more in a sit down with Goal.com. 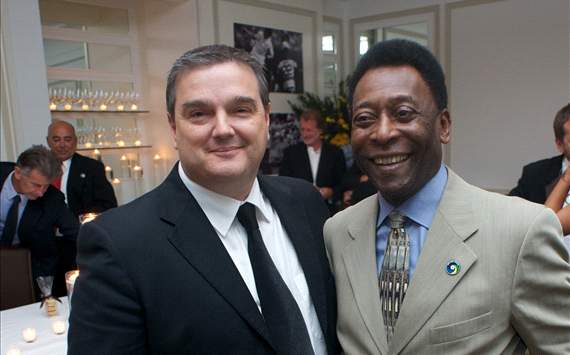 
It All Comes Down To The Stadium

A source close to the Cosmos who didn’t want to be named said that the delay for the Cosmos comes to the Commissioner’s decision to increase the cost to purchase an MLS club. When the club announced its interest to join the league, the price was approximately $40 million.

Now, it is being speculated that Garber wants over $70 million for any potential suitor looking to play in New York, which is a staggering 57-percent increase from the price that Joey Saputo paid to have the Montreal Impact join the league.

Byrne denies that the franchise fee is the reason for any delay and says that the most important component of the New York Cosmos MLS bid is where the team will ultimately play. Garber has made no secret of the fact that he wants a team in New York City as opposed to playing outside of the city like the Red Bulls, who are based in New Jersey.

“I think the franchise fee is in negotiation,” said Byrne.  “Don’s job is to get the highest fee that he possibly can. Our job as a business is to get the correct fee. I think the biggest issue here is the stadium. We have to be fully prepared to pull the trigger on an all singing and dancing stadium. That’s our biggest challenge.

The former Watford general manager revealed that the team has had lengthy discussions with New York’s Mayor Michael Bloomberg, whom Byrne's adds is very supportive of the team’s bid. Byrne says that after examining over a dozen sites for a stadium, the team has narrowed down its top choices to four locations if it is approved to join MLS.

“The city and stadium team that is comprised of two people have narrowed down four specific sites,” said Byrne. “Within those sites, there are challenges with each one but different. “

Whether it would be transport infrastructure or more technical issues like electricity, Byrne says the club is trying to make sure that the area it chooses is critical to its success. While he couldn’t get into exact neighborhoods due to current real estate negotiations, Byrne was able to reveal which boroughs the team is looking at.

Two of the locations are in Queens, one in Brooklyn and even one in Manhattan is a possibility as the team has identified an area in the borough’s uptown area that would be viable.

As for the rumors that MLS was going to announce its 20th franchise during the All-Star match, Byrne says that he was never aware of that development and states that that rumor likely came from the league itself.

“That came out of the MLS office and that’s not the case,” said Byrne.

The Cosmos Would Help Revitalize Interest In The Red Bulls

Across the Hudson River are the Red Bulls and their new stadium in Harrison, N.J.

Even though the club has gained rave reviews for Red Bull Arena and being able to continue signing big-name players and recruiting young talent, there continues to be an apathetic view towards the team.

The Red Bulls have had only three sellouts since opening Red Bull Arena in March 2010. Even the All-Star game held at the venue had tickets for sale on the team's official website up to a week before the event.

Byrne believes that a combination of the Red Bulls' history and poor infrastructure decisions have cost the team fans and overall awareness. The stadium is a 20-minute PATH train ride outside of Manhattan.

“It’s an amazing stadium but I think they have been a victim of their geographical location,” explains Byrne. “I think they are always going to struggle to attract people from New York City to go out there.”

Still, Byrne says that the Red Bulls should be proud of what they’ve accomplished so far. They have a great youth academy that has produced the likes of promising striker Agudelo and have successfully recruited Henry, Marquez and former HSV goalkeeper Frank Rost.

“Do I admire what they’ve done?” Byrne asked. “Absolutely. Would I like to have a stadium like that with Thierry Henry and Rafa Marquez? Yes, I would. “

If MLS approves the Cosmos, Byrne believes that a rivalry between the two clubs would not only heighten the interest of soccer in the city but also bring in new fans.

“Our job in future is to replicate what they’ve done in some regards and create a rivalry,” he said.

More Than Just A Brand 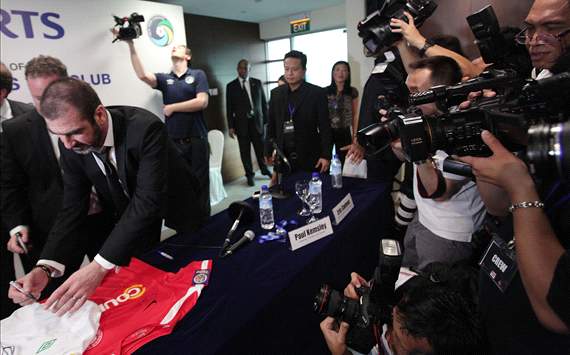 Byrne realizes that despite all of the hard work that has gone into bringing the club back on a professional level, the general public only sees the Cosmos merchandising side of the business.

"Am I concerned about [people seeing the Cosmos as just a marketing brand]? No. Do I think its perception that people have? Yes," Byrne said.

While he stresses that rebuilding brand recognition is important to the club as it generates revenue without having an actual roster, he is most proud in is the Cosmos' commitment to youth development.

"For the first year that we were under the radar, our goal was to get the youth academy in place," said Byrne. "[Academy directors] Teddy Chronopolous and Giovanni Savarese have done a good job."

The team's Premier Development League club is undefeated in its past four matches and the youth academy teams continue to gain recognition.

The Cosmos have received a mixed response for the decision to have their first game in over 20 years across the Atlantic Ocean against Manchester United on Aug. 5. Criticisms have lied in the fact that the team's first concrete development since its announcement to return to professional soccer will not be in front of local supporters.

Bryne understands that perspective and admits the club intended to have its first game back in the United States, but says that with several major European teams already playing friendlies against MLS clubs it would have been unlikely that the Cosmos would have been given the proper acknowledgement. Byrne also believes that the opportunity was too good to pass up.

"The fact that United agreed to play us and that no MLS team has ever played at Old Trafford is the single biggest gratification of what we've done so far. If you said to me, go and pick a dream game, this would be one of three places," said Byrne, adding that Camp Nou and Santiago Bernabeu would be his other dream destinations.

Byrne says that one of the biggest accomplishments out of the game will be seeing some of the team's academy players playing alongside some of the world's top players. Retired legends ranging from Fabio Cannavaro to Brian McBride will also be playing in the match.

"My dream was to give some of the homegrown talent the opportunity to play along some of the world's best," Byrne said.

As for the Cosmos' MLS future, Byrne says once the team makes its decision of where it would like to play, he assumes MLS will be helpful in seeing the Cosmos join the league. But he also accepts the fact that the club might have to play in the United Soccer Leagues if an agreement cannot be reached.

"We have had those discussions," said Byrne, quickly adding, "However, our goal is to be playing in the highest professional level in America."

According to the Cosmos Vice Chairman, it is unlikely that MLS and the club won't be able to get on the same page. He expects a decision shortly.

“The level of conversations are ongoing," Byrne said. "I think within the next six to eight months decisions will be made. Hopefully, that’s positive for us. “

Then maybe New York can have a marquee soccer team to care about.