The particulars of the trade – the American international left back to the Red-and-White in exchange for an undisclosed amount of allocation money – appear suitable to both sides, but the disparate approaches required to consummate such a deal provide an intriguing look at Chivas USA's desire to rebuild and FC Dallas' quest to maintain and supplement its current squad.

For Chivas USA and first-year coach Robin Fraser, Pearce represents more than just a natural replacement for the departed Jonathan Bornstein. The former Hansa Rostock fullback continues to extend the implementation of Fraser's vision to mend the tattered squad he inherited with seasoned performers capable of constructing a resolute defense.

The injection of several diligent professionals – former Philadelphia striker Alejandro Moreno fits into this category as well – should create a culture of expectation and establish a series of standards this relatively young squad will need as it seeks to climb up the table. There is still plenty of work ahead as the current squad likely requires another central defender, a wide player or two and some creative options in the final third to challenge in the daunting Western Conference, but Fraser has continued his lengthy restructuring process in earnest with this move.

FC Dallas faces another task altogether as it adjusts to the departure of its starting right back. FCD must figure out a way to use the incoming allocation money and the salary budget room freed up by Pearce's departure – $198,000 base/$207,500 guaranteed, according to MLS Players' Union data – to bolster its chances of challenging for honors.

It is a scenario set to unfold primarily due to the strength of Schellas Hyndman's squad. Pearce's exit marks the second salary-related move ushered through by FCD's ability to replace veteran players with  younger and cheaper options already on hand. FCD left Dax McCarty exposed in the expansion draft because it believed it had a promising replacement on the books in Eric Alexander, while the emergence of Jackson and Zach Loyd – plus Jair Benitez's presence in Pearce's natural role – permitted FCD to ship off yet another high-priced starter in an attempt to strengthen the squad elsewhere. 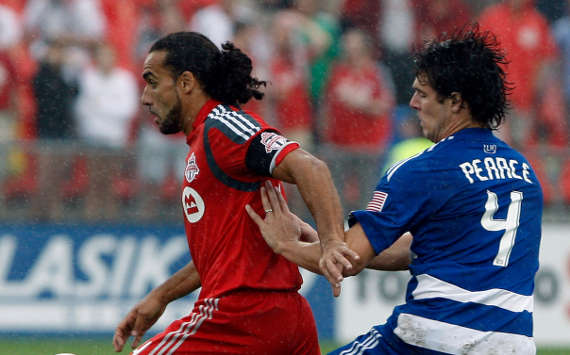 By dishing Pearce and expanding the available budget room already created by the departures of Jeff Cunningham, Atiba Harris and McCarty, FCD technical director Barry Gorman and Hyndman likely possess the wherewithal to acquire a striker to lead the line. The injury-prone Milton Rodriguez offers the only viable in-house choice, though Maykel Galindo could possibly join the club if he impresses on trial and Ruben Luna showed flashes of his talent after signing a homegrown contract last season. With David Ferreira now permanently in the fold, FCD will create chances no matter who operates up front, but an additional forward would prevent opposing defenses from treating the reigning MLS MVP as the lone threat through the middle.

Fortunately for FC Dallas, the addition of another striker looms one of the few holes remaining to be filled as Hyndman plots another assault on MLS Cup. Fraser and Chivas USA can't say the same about Pearce's arrival, but his presence represents another step toward the Red-and-White's ultimate objective. In the end, this mutually beneficial swap just shows how far apart these two sides are as they travel down the same path.

Kyle McCarthy writes the Monday MLS Breakdown and frequently writes opinion pieces during the week for Goal.com. He also covers the New England Revolution for the Boston Herald and MLSsoccer.com. Contact him with your questions or comments at kyle.mccarthy@goal.comand follow him on Twitter by clicking here.