New York climbs into the top four in this week's Goal.com MLS Rankings.
By Kyle McCarthy

1. FC Dallas – It isn't all dash and flash for FCD. The most recent evidence to buttress that claim:  Saturday's gritty 0-0 draw at Columbus. (1)

2. Real Salt Lake – After a devastating midweek defeat to Cruz Azul in Champions League action, RSL recovered and deserved more than a share of the spoils in Toronto at the weekend. The extra strain on the starting XI, however, could have a knock-on effect when New York visits Rio Tinto Stadium on Saturday night. (2)

4. New York – Four Red Bulls will miss the trip to RSL while away on international duty, but Rafa Marquez stands out as the most influential member of the missing brigade because of the importance of his holding role in central midfield. Tony Tchani must continue his fine recent form by restricting Javier Morales' time and space on the ball with the veteran Marquez unavailable to use his nous to plug the gaps. (5)

5. Los Angeles – Inserting Leonardo for the virus-stricken Gregg Berhalter hasn't panned out. The young Brazilian defender makes too many mistakes to retain his place in a playoff-chasing side. (4)

6. Seattle – Nathan Sturgis probably won't receive a ton of credit because he plays alongside the excellent Osvaldo Alonso in the Sounders FC engine room, but it isn't a coincidence that Seattle has improved in the center of the park with the injury-prone left-footer now consistently available. (7)

7. Colorado – Will the Houston thumping provide a much needed attacking spark? The key could lie in whether Jamie Smith can provide some genuine width down the left to help spread teams out and create some space through the middle for Conor Casey and company. (8)

8. San Jose – No complaints about the defeat at New York, but the Earthquakes need to find a way to extract a result in Houston to keep pace in the playoff chase. (6) 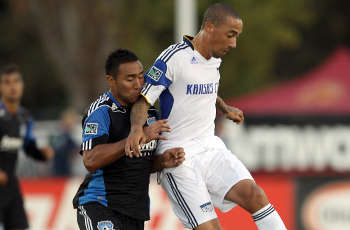 9. Kansas City – Few teams are hotter than the Wizards are at the moment, but will the inevitable scuttlebutt surrounding manager Peter Vermes' recent brush with law enforcement serve as a distraction before Saturday's vital trip to Philadelphia? (11)

10. Chicago – Fire coach Carlos de los Cobos will have to figure out a way to best use John Thorrington now that the influential midfielder has finally returned to the lineup. While Thorrington played on the left side of midfield in Chicago's 4-3-2-1 formation in a 2-1 defeat at Seattle on Saturday night, he will eventually have to slide into the center of the field to amplify his impact on the proceedings. (10)

11. Toronto FC – The inherent lack of ambition in Preki's team selection for matches at BMO Field could prove crippling to TFC's playoff hopes. (9)

12. Chivas USA – It should be fun to watch Justin Braun develop over the next few seasons. He isn't the finished article by any stretch, but his graft and power will continue to yield results for a side in need of building blocks for the future. (14)

13. Philadelphia – The Union may have started Saturday night's 2-1 win over New England with nary a winger on the field, but it concluded the evening with a pair of wide players – Justin Mapp and Roger Torres – who could feature prominently as Philly looks to the future. (15)

14. New England – After the crushing home defeat to Philly, it looks like SuperLiga or bust for the Revolution this season. Monarcas Morelia will provide a stern test on Wednesday night, but the Revs will have a puncher's chance so long as they can keep things tight at the back. (13)

15. Houston – That promised Designated Player needs to arrive during the offseason. And, based upon recent performances, play about four or five positions simultaneously. (12)