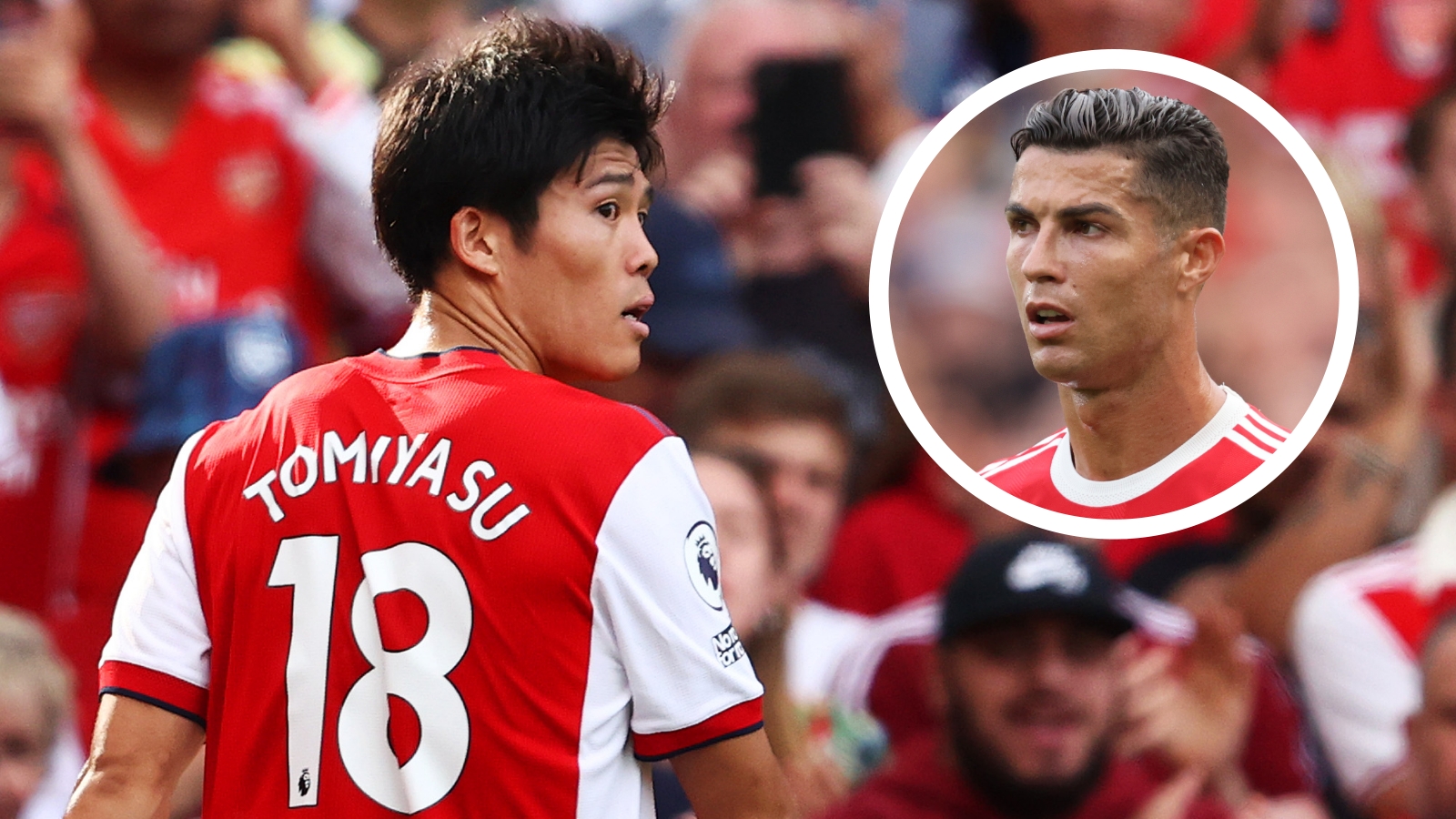 The Japan international has made a huge impact since joining the Gunners from Bologna in the summer, quickly becoming a fan favourite in north London

When he arrived at Arsenal from Bologna on transfer deadline day, Takehiro Tomiyasu could not have dreamt of a better start to life in north London.

The Japan defender has made a huge impression during his first few weeks at the club, and made a mockery of those who labelled him as nothing more than a last-minute panic buy.

When he joined, Arsenal were sat bottom of the table having conceded nine goals in their opening three Premier League games.

Now, just under a month later, they are 10th and have picked up maximum points from games against Norwich, Burnley and Tottenham, keeping two clean sheets in the process.

It has been a remarkable turnaround from Mikel Arteta’s side, and the Spaniard’s new right-back has been at the heart of it.

Tomiyasu has been imperious during his first three appearances for the Gunners, with Arsenal fans voting the 22-year-old as Man of the Match following Sunday’s north London derby victory against Spurs.

Not one player has managed to dribble past Tomiyasu yet during his first three appearances in the Premier League, while he has also won 14 of his 16 aerial duels, made 10 clearances, three tackles, two interceptions and has an overall duel success rate of 76 per cent.

So it is perhaps no surprise that he is in the running for Arsenal’s Player of the Month award for September.

The immediate impact the defender has made in north London will have surprised many people in England, but it has not come as a shock to Andre Pinto, the sporting director at Sint-Truiden, the Belgian club that first brought Tomiyasu to Europe in 2018.

“What is amazing about Tomi is that he doesn’t accept anything that isn’t success,” Pinto tells Goal during an exclusive interview. “He’s not lucky, nothing for Tomi comes because he’s lucky. He’s just a hard working player.

“You find a lot of dedicated players, but Tomi has a little bit of the Cristiano Ronaldo mentality in terms of determination, in terms of working hard and in terms of eating healthy.

“He is the type of player who is never satisfied. He will always continue to work hard to keep developing himself.”

Tomiyasu is a player who has had his career mapped out from an early age.

When he was first coming through as a teenager back in his homeland with Avispa Fukuoka, he already knew the path that he wanted to follow: his ambition was always to make it to the Premier League.

It was a dream which grew following a game against England Under-19s in Manchester in 2016, when a side including Ainsley Maitland-Niles crushed Japan 5-1.

"That game was one big reason for me why I wanted to play in the Premier League," Tomiyasu told Arsenal.com. "We couldn't do hardly anything in that game.

"At that moment I thought that I have to one day get to the level where I could play in England.”

Tomiyasu was 17 at the time. Now, just five years later, he is exactly where he wants to be. And, just like his start to life at Arsenal, his journey to England has been swift.

He made the move to Sint-Truiden in January 2018, soon after Japanese online company DMM had taken control of the Belgian outfit.

Pinto had just been appointed as the club’s sporting director having previously worked with FC Tokyo, and he immediately knew who his first signing had to be.

“I worked with our CEO, Takayuki Tateishi, at FC Tokyo so we knew Tomi from Japan,” Pinto says. “He was 19 at the time and what captured our attention the most was his potential. It’s not every day that you have a player who is 1.88m and has the speed, the physicality and the technique.

“We believed so much in Tomi that when he came he had an ankle injury and was recovering. Our doctors were saying ‘you can’t sign this player, he is injured’. So our CEO went to the board and said ‘you can take him, I guarantee it’. This is how much confidence we had in Tomi at the time.”

Having arrived injured, Tomiyasu played for just one minute during his first six months with Sint-Truiden.

But following a change of coach in the summer, he was a revelation during the 2018-19 campaign, and ended it by being named the supporters’ Player of the Season.

That would, though, prove to be his one and only full season in Belgium.

“Tomi just took over that season and had amazing games,” Pinto says. “He just exploded.

“We knew after the first three or four months of that season that it was going to be difficult to keep hold of him.

“Of course Belgium is a very interesting market where all the scouts come to look at young players. So he was on the radar of many different clubs at that time.”

It was clear that Tomiyasu would be leaving Sint-Truiden in the summer of 2019, and though clubs from across Europe were interested, he knew where his next destination should be.

While playing in the Premier League remained his goal, there was one stop he wanted to make first.

“The key there was that Tomi always knew what he wanted,” Pinto explains.

“He knew that his next step was to go to Italy to learn from the best defensive styles, he wanted to play in a country famed for players like [Paolo] Maldini.

“Tomi wanted to go there and at that time, of all the clubs that were following him, Bologna were already a step ahead and had done their homework.

Tomiyasu moved for just over £6 million ($7.6m) in July 2019, and wasted little time making an impression in Italy.

He immediately started to learn the language and adjusted quickly to the demands of Serie A, showing his versatility by operating in various positions across the back four.

Tomiyasu made 29 league appearances in his first season in Italy and 31 in his second.

Atalanta were soon on his trail, but the lure of a dream move to England was growing. Tottenham were interested earlier this summer, but in the end it was Arsenal who made their move in the final 48 hours of the transfer window.

"I was very excited as soon as I knew,” Tomiyasu said. “I didn't need to call anyone or speak to anyone for advice.

“It was an easy choice for me, because, well because it's Arsenal.

“I didn't even have time to speak to the manager before signing the contract, and I didn't need to. I wanted to come."

Tomiyasu was on international duty with Japan when he signed, and after finally flying to England a week later to meet up with his new team-mates, he was thrown straight into the starting XI against Norwich two days later.

His impressive debut lasted 60 minutes before he was withdrawn. He then went to Burnley and demonstrated that he has no problem handling the physical side of the Premier League, coming through the full 90 minutes as Arsenal battled to a 1-0 win.

He followed that up with another eye-catching display in Sunday’s north London derby, with his performance in the 3-1 win further cementing his place as a fan favourite.

Tomiyasu has helped breathe new life into an Arsenal side that had looked stale and devoid of ideas just a few weeks ago. His arrival has coincided with a massive upturn in form and there is a growing belief around the club that they are now on the right track, with the six summer recruits bringing a sense of freshness to the dressing room.

For Tomiyasu, the priority now will just be to continue to improve and to prepare himself in the best way possible for a demanding debut season in the toughest league in the world.

So will the young defender be able to handle it?

“One thing that I’ve learned is never to sell Tomi short because he’ll just keep surprising us,” Pinto concludes.

“The biggest challenge in the Premier League is that you are going to play against the fastest wingers in the world, so you need a little bit of time to adapt.

“But again, Tomi adapts very quickly. Whatever he needs to improve, he will already be working on it.”