Following a hugely successful spell at Anfield, the Senegal forward has moved on to join the Bundesliga champions

The 30-year-old informed the Reds of his desire to leave after their Champions League final defeat against Real Madrid in May, and with Mane having just one year left on his contract, the Reds have allowed him to depart now rather than risk losing him for nothing in the summer of 2023.

Mane's exit brings to a close an immensely successful spell for the Senegal international in English football, with his time at Liverpool seeing him return 120 goals in 269 appearances.

How much will Mane cost Bayern Munich?

Liverpool will receive a €32m (£27m/$34m) fixed fee for Mane, with a further €6m (£5m/$6m) possible based on appearances, along with another €3m depending on individual and team achievements.

The transfer fee means Liverpool have sold the winger for more than the £33.5m (€39m/$40m) they paid to sign him from Southampton in 2016 - but for Bayern, it marks a key bit of business in the transfer window.

What is Mane's contract length and salary at Bayern?

Mane has signed three-year contract at Bayern, tying him to the Bundesliga champions until the summer of 2025.

Reports claim he is set to earn a salary of around €15m-a-year, making him one of the highest earners at the Allianz Arena.

What has been said about Mane's move to Bayern?

Mane told his new club's website: "I'm very happy to finally be with FC Bayern in Munich. We had a lot of talks and I felt the great interest of this big club from the start. So there was no doubt in my mind right from the start: this is the right time for this challenge.

"I want to achieve a lot with this club, also internationally. During my time in Salzburg I followed many FC Bayern games - I like this club very much!"

Mane leaves a legend - replacing him won't be easy

It didn't take Liverpool fans long to fall in love with Mane, but it might take them a while to get over his exit.

What a start to his Liverpool career, and he only got betterpic.twitter.com/76LREcLTyV

He leaves as an Anfield legend, for sure. He was the first of Jurgen Klopp's true great signings on Merseyside, the catalyst for the Reds' rise from also-rans to real, genuine contenders.

The perfect blend of technique, physicality and brains, he has thrived in three different positions under Klopp: player of the year on the right, European and Premier League champion on the left and, in 2022, as a free-scoring, roaming No 9.

Liverpool have gambled on Darwin Nunez and Luis Diaz to plug the gaps Mane will leave. Both have immense potential, and look well-suited to Klopp's system, but both will have to be something special to replace the smiling, scoring Senegalese superstar.

Bayern are getting a gem, and at a knock-down price too. Liverpool surely could have asked for more, but maybe felt they owed it to Mane to respect his wishes

He wanted to leave on his terms. He didn't get the Champions League win which would have made it a perfect ending, but he departs as a true great. He will always be adored at Anfield, and rightly so.

For Bayern - and German football - this deal is a huge one. It is very difficult to remember the last time a world-class player moved to the Bundesliga at his peak.

And given the price, it's an absolute steal!

At the same time, it has to be said that Mane doesn't fix any of the Bayern squad's most obvious problem areas, and though he undoubtedly strengthens the attack and makes a possible departure of Robert Lewandowski easier, he is not a classic No.9.

Regardless, he is an upgrade on the likes of Serge Gnabry and Leroy Sane in terms of being a wide forward, and as such it is difficult to criticise Bayern for the deal, even if the policy of replacing one big name (Lewandowski) with another (Mane) does not always make strategic sense.

In the short-term, however, Bayern couldn't have hoped for much more from a new signing this summer. With Mane, they will struggle to go wrong.

Where will Mane play for Bayern Munich?

Where Mane fits into the Bayern team in 2022-23 will likely depend on the future of Robert Lewandowski, who continues to push for a move away from the club as he enters the final year of his contract.

A scorer of 344 goals in 374 games for the Bavarians, Lewandowski's boots will take some filling, and Mane could be tasked with doing just that by Julian Nagelsmann, having played as a central striker for much of the second half of last season at Liverpool following the arrival of Luis Diaz. 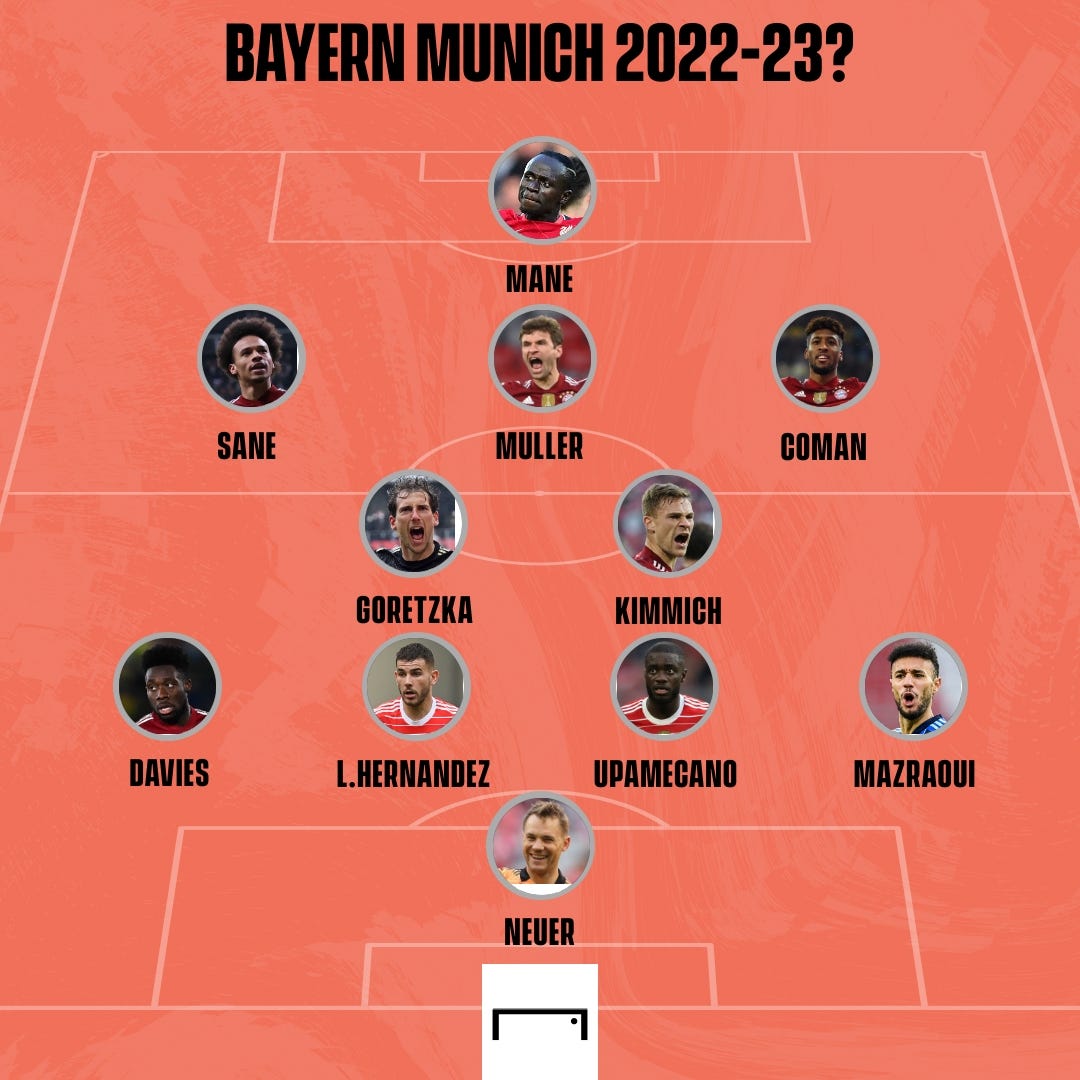 Should Lewandowski stay or a natural No.9 replacement, such as Stuttgart striker Sasa Kalajdzic, be found, then Mane will likely be deployed in his more natural position out wide on the left.

Kingsley Coman would be paired with him on the right-hand side, with Leroy Sane and Serge Gnabry - presuming he is not sold this summer - available in reserve.

How do Liverpool plan on replacing Mane?

The Reds have already brought in their replacement for Mane in the form of Darwin Nunez. The 22-year-old was announced as the latest attacking arrival at Anfield, as Klopp continues to rebuild in forward areas following the arrivals of Luis Diaz and Fabio Carvalho in the last six months.

Nunez has signed a six-year contract that will keep him at Liverpool until 2028. Reports suggest that he will earn around £5m ($6.1m) per year in salary, significantly less than Mane was on at Anfield.