Alex Ferguson was famous for finding creative excuses for his players when things didn't go their way, with one of the most memorable coming in 1996

Manchester United's famous half-time kit change during a match against Southampton in the 1995-96 season remains one of the more unusual moments in the history of the Premier League.

The Red Devils played the first half of the game in their grey Umbro away kit before emerging in totally different teamwear for the second half, leaving the Saints players and the spectators confused.

Alex Ferguson's sudden decision to make his players get changed into new gear led to speculation that it was some sort of superstition, but the real reason was much more practical in nature.

Goal takes a look back at the bizarre incident which happened at The Dell in April 1996 and why it occurred.

Why did Man Utd change their grey kit vs Southampton?

Manchester United changed their kit at half-time against Southampton because the players could not see each other well enough on the pitch, according to Ferguson.

The Red Devils had gone 12 games unbeaten in the league prior to the match and were well on course to win the title but surprisingly trailed the relegation-threatened Saints by three goals at the break.

"You're seeing a team now in a different strip," noted commentator Clive Tyldesley as the players returned to the pitch. "Officially, we're told it's because the United players couldn't spot each other well enough."

Indeed, Ferguson was frank in his explanation afterwards, saying: "The players don't like the grey strip. The players couldn't pick each other out.

"They said it was difficult to see their team-mates at distance when they lifted their heads.

"It was nothing to do with superstition," he added.

"This club went 26 years without winning the league and we didn't think about changing the red shirts. It's nothing to do with that at all." 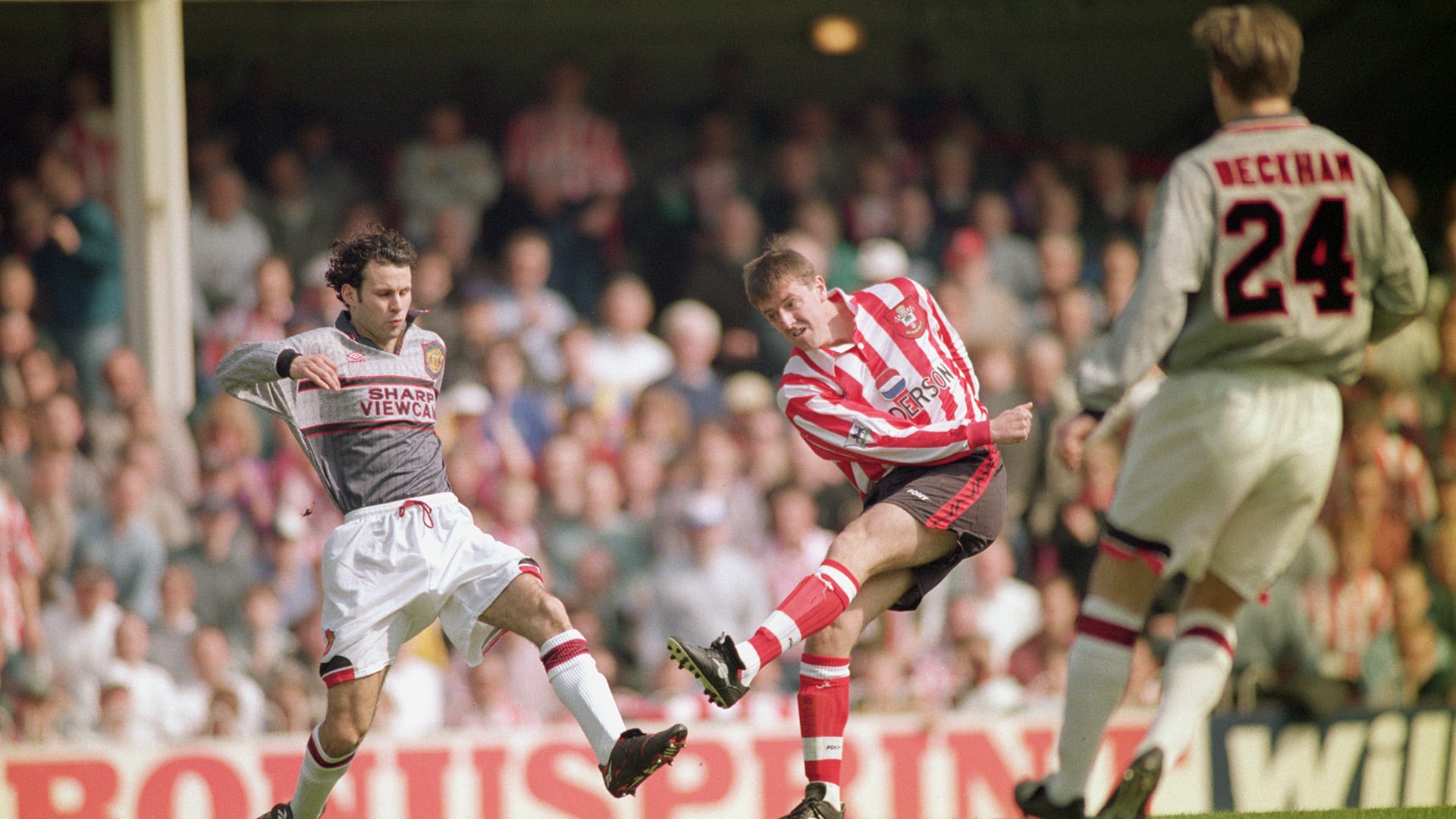 According to Gary Neville, who played that day, Ferguson actually employed a vision specialist who advised the legendary manager that the colourway of the grey kit was not conducive to accurate passing.

"[The specialist] brought in a lot of eye and alertness exercises and said to Sir Alex to imagine a crowd behind you, there are colours you can see more than others," Neville explained on the 'Quickly Kevin, Will He Score?' podcast.

"It is the reason people wear bright yellow on a motorway. She believed when you saw these grey kits that the players won't pick each other up at a distance.

"It had been going on for months and he had rejected this kit a couple of months before. He wasn't having it."

What kit did Man Utd change into at half-time?

Manchester United ditched their troublesome grey kit at half-time in favour of a more striking blue and white striped outfit.

Interestingly, Le Tissier claimed afterwards that he didn't even notice the sartorial switch.

"If I'm honest, I didn't realise until after the game that they'd changed their kit," the former midfielder told Sky Sports.

"It was only afterwards that I was stopped by a journalist in the car park and asked about it. I didn't have a clue up until that point, which is pretty ridiculous given it wasn't like it was a subtle change!" 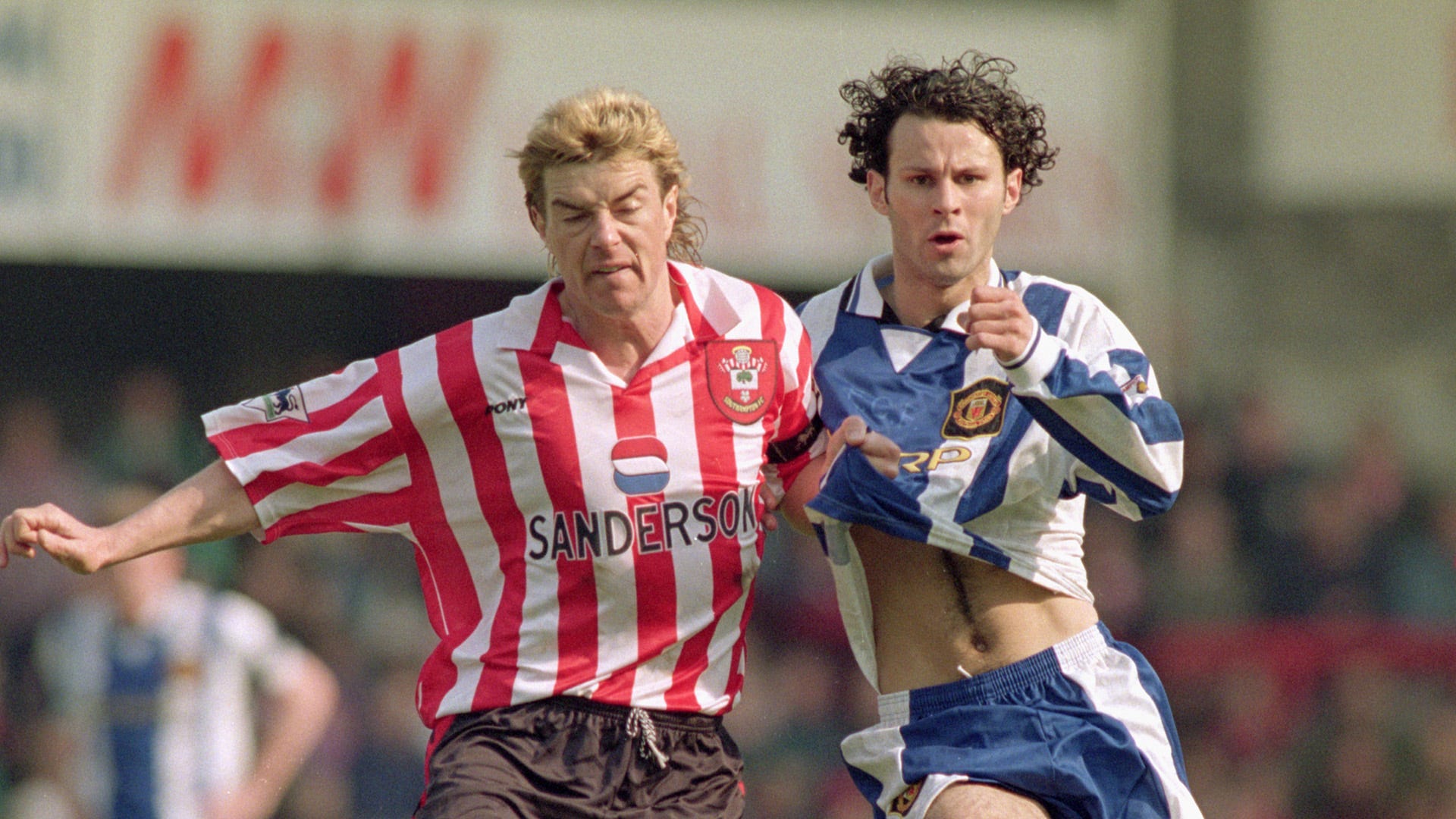 Did Man Utd's kit change make any difference to the game?

Unfortunately for Manchester United, Ferguson's novel idea of changing from the grey kit to blue and white stripes at half-time didn't pay off.

With the Red Devils supposedly at a disadvantage thanks to the grey kit, Southampton roared into a formidable 3-0 lead thanks to goals from Ken Monkou, Neil Shipperly and Matt Le Tissier.

But though they reduced the deficit in the second half through a Ryan Giggs goal, Ferguson's charges were unable to turn things round and the game finished 3-1.

The loss meant that United's run of disappointing results while wearing the kit continued, having failed to win a single game in the four previous games it was worn.

Ferguson's frustration was ultimately heeded by the club and after five unsuccessful wears the grey kit was never worn again, with Umbro even reducing the price in response to the outrage.

It did come at a cost though, as Manchester United were fined £10,000 by the Football Association for breaching protocal relating to kits, which Ferguson later described as "the best £10,000 I ever spent".

While the kit change didn't yield the desired result against Southampton, it did serve as a convenient distraction from the fact that the team lost the match and played badly.

"When some of us made mistakes, it was ideal for him," remarked Neville. "[Ferguson] was a master of distraction and taking the headline away from the players."

Le Tissier, however, takes issue with the excuse of the grey kit, believing that Southampton were simply superior to Manchester United on the day.

"It was probably one of the worst excuses I've heard," he said.

"It was definitely a case of the manager taking the heat off of his players. We just battered them in the first half. We were unbelievable.

"I remember they got a consolation in stoppage-time but it was nothing to do with their kit."