If Pep Guardiola doesn’t win the Champions League with Manchester City he will be remembered as a failure.

That’s what the Catalan says himself; partly tongue-in-cheek and partly serious as he knows his critics will always use a lack of European success as a stick to beat him with.

It’s now nine years since he last lifted the trophy with Barcelona and there are many who insist that Guardiola can’t win it without the influence of Lionel Messi on the pitch.

He left Bayern Munich in 2016 having won three Bundesliga titles and two German Cups but his inability to win the European prize - claimed by his predecessor Jupp Heynckes immediately before his arrival - left his record tarnished for some.

For a start, the Champions League is an extremely difficult competition to win. Only three coaches in the history of the competition have won it more than Guardiola - Carlos Ancelotti, Bob Paisley and Friday night’s opponent Zinedine Zidane. If he wins it again, he would match all three.

The City boss also has an extraordinary record in the competition, winning 20 of the 28 knockout ties he has played against the best in Europe and has only failed to reach the quarter-finals once in the 10 seasons before this one.

Guardiola sometimes hints at misfortune in the competition and those close to him say he believes it has played a key part; the difference between success and failure comes down to small margins and luck hasn’t always gone his way.

Most notable was his final season at the Allianz Arena when Bayern were eliminated on the away goals rule to Atletico Madrid after Thomas Muller missed a penalty and Antoine Griezmann’s decisive goal looked marginally offside.

City’s most recent campaign was also ended by the away goals rule against Tottenham in another tale of what could have been. Raheem Sterling’s injury-time goal was rightly ruled out by VAR, but Fernando Llorente’s winner appeared to go in off his arm while Sergio Aguero missed a penalty in the first leg.

A year before, when VAR wasn’t in place, the defeat to Liverpool could have been a lot different. Gabriel Jesus’s late goal in the 3-0 defeat at Anfield was wrongly ruled out for offside, as was a second in the return leg as City threatened to overturned their rivals.

That’s the case for the defence of Guardiola’s record but there have also been mistakes along the way.

In his first season at Bayern, his side trailed 1-0 against Real Madrid on aggregate but they were mauled 4-0 in the return leg at home. His assistant Domenec Torrent claimed some players ignored his tactics but it was a humiliating exit as Ancelotti’s side picked off his team when they chased the game.

A year later, he played an adventurous high-line in the semi-final first leg at Barcelona and was picked off by the brilliance of Messi, eventually losing 3-0.

Even at City, basic tactics have gone wrong. In his first season at the Etihad Stadium, his side won a thrilling first leg 5-3 against Monaco but couldn’t cope with a fluid and exciting young line-up, as Kylian Mbappe and Bernardo Silva exposed defensive weaknesses.

Games can often run away from his sides with opponents scoring goals in quick bursts that can kill off ties and Guardiola admitted it has been a problem ahead of Friday night's second leg against Real Madrid.

"More than conceding a goal is the way we concede a goal,” he said. "When they are brilliant and make a good action, we have to accept it. But most of them were goals we could have avoided. We have to avoid it.

“Making mistakes in this competition punishes you a lot. We know it. We spoke about it many times, not this week but the last years, many times.

“If we want to make a step forward as a team to be close to winning this competition, we have to be better in this area."

Guardiola still struggles against defensive, counterattacking teams - a tactic that has brought Zidane success at Madrid although he may be forced to be more attacking after the 2-1 first-leg defeat.

In the past, managers such as Jose Mourinho, with Inter in 2010, and Diego Simeone, with Atletico in 2016, tried to make ties tighter and with that any defensive error is critical.

Guardiola has also been criticised for getting too creative in big fixtures and even Bayern forward Muller believes his former manager “overthinks” the big games.

There have been examples.

Against Liverpool in 2018, he tried to squeeze in an extra midfielder to gain more control and stop the lightning attacks of Jurgen Klopp’s side. But it failed. 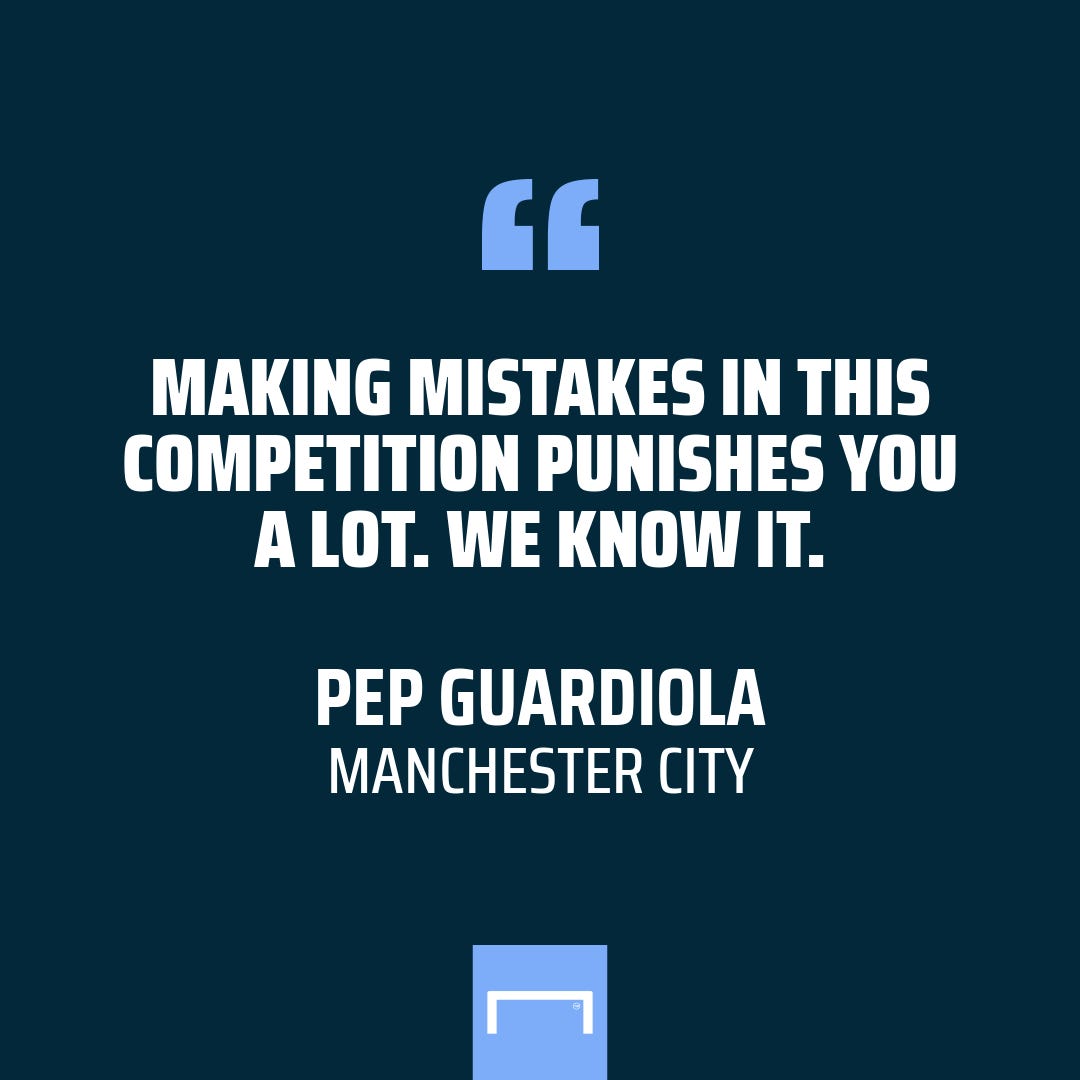 His decision to leave out Aguero for the trip to the Santiago Bernabeu in February and play without a striker was also a risk although that worked out well when they dominated possession to claim a 2-1 victory.

But not playing Kevin De Bruyne and Vincent Kompany in the first leg at Spurs last season backfired, as did recalling Fabian Delph for only his second start in four months with the Everton man culpable for the only goal.

Guardiola has had five months to prepare for the visit of Madrid, although Zidane’s side have been transformed in that time, claiming the Spanish title, but will still go out to win.

“Quite often managers plan for games and coaches make detailed plans but in the end the game speaks for itself,” he said about his approach to the second leg.

“You can set up in a certain way but the way the game develops dictates how you will approach it during the game. We want to play our game, we want to impose our own style whether we have to be defending or playing on the counterattack or whether Madrid are countering.

Some of the passion will be taken out of the game without 55,000 fans in the stadium because of the Covid-19 restrictions.

There won’t be the usual booing of the Champions League anthem - it would have been even louder after the recent Court of Arbitration for Sport decision to lift a two-year European ban.

Without those emotions, tactics become even more important. Guardiola will back himself to get them right. Others will be watching with interest.