By Teng Kiat | Goal Singapore
The LionsXII centre-back is pleased to be recognised with the inaugural Goal Singapore Player of the Year accolade, having never thought he'd even be nominated in the first place
Singapore captain Shahril Ishak, predator Khairul Amri, veteran Aleksandar Duric, mercurial Qiu Li and Lions custodian Hassan Sunny - these are tough opposition to win any award against.

But Safuwan Baharudin has done just that and beaten the above-named players to take the Player of the Year gong in the inaugural Goal Singapore Football Awards.

Being the youngest of the five nominees, the 22-year-old LionsXII centre-back was "honoured" to win his second trophy from Goal after bagging the AFF Championship Best Young Player in 2012.

"I’ve beaten the likes of Shahril, Amri and Duric… I think at this age, you definitely don’t think that you’ll even get the chance to get a nomination," he told Goal Singaporeon Thursday before training.

"Definitely, I’ve never thought that I would win this; the first time I got the news, my wife told me Shahril would win!"

But that is not to say that Safuwan lacks confidence in himself. Having firmly established himself as a key player for both club and country in the last couple of years, the former Singapore Sports School and Courts Young Lions graduate knows what it takes to have come so far.

"You have to keep believing in yourself," he asserted.

"I think I’ve been consistent throughout the year and the team has given me the support. This is something that is a booster for me - it’s not [that] important to me, because I think the team has to win trophies.

"But I think individual trophies is something that boosts a player and it’s definitely different from others (team accolades)." 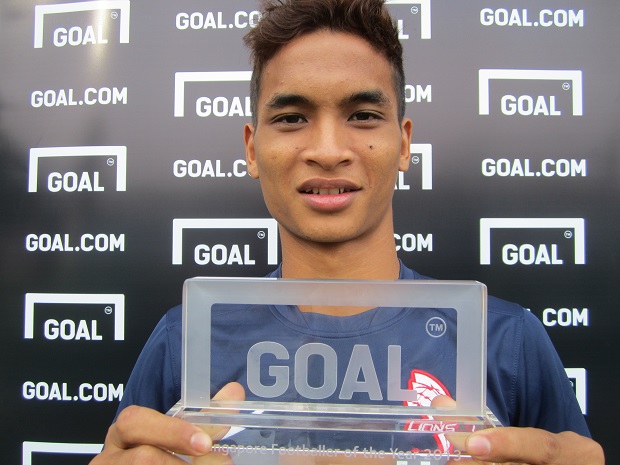 Safuwan proudly holding up his trophy

Having starred last season as the LionsXII won the Malaysia Super League in only their second campaign, Safuwan hopes for better things to come in 2014.

"I am hoping for a good start [because] I’ve [already] got two injuries and it’s not very good because it slows down your momentum," he explained.

The champions got their home campaign off to a winning start on Saturday against Selangor FA with a last-gasp win, extending their unbeaten record at Jalan Besar Stadium to 18 months.

Home support has been and will be critical in the LionsXII's quest to do well under new coach Fandi Ahmad, and Safuwan hopes the fans will continue to back them with fervour.

"It’s not only me that has faith in the team, but the whole of Singapore," he responded when asked whether the team can do well this year.

"It’s a brand new year year and brand new team, but we hope Singaporeans will be there to support us and hopefully we can defend the title!"

Goal Singapore congratulates Safuwan once again for winning the Player of the Year award!
Close