Real Madrid and Portuguese star Cristiano Ronaldo took time out during the off-season to care for nature, flying to Bali to be the Mangrove Care Forum ambassador at the invitation of founder Tomy Winata, who also founded the Artha Graha Peduli Foundation.

The foundation aims to ensure the cleanliness, maintenance and planting of mangroves around Tanjung Benoa, together with local communities.

Ronaldo, who was accompanied by his girlfriend Irina Shayk, planted a symbolic mangrove with Indonesian President Susilo Bambang Yudhoyono in Telaga Waja, which is located on the gulf coast of Benoa.

Also present at the event were First Lady Ani Yudhoyono and several of Yudhoyono’s cabinet ministers, including the Minister of Forestry Zulkifli Hasan.

Feeling honored at the opportunity given by the Indonesian delegate for him to be part of this community effort, Ronaldo thanked the stakeholders and pointed out that his visit to Bali aims to inspire the rehabilitation of mangroves.

"I would like to thank the President and the First Lady," he said.

“It's an honor for me to return to Indonesia. Earlier this year, Peter Lim and Tomy Winata made me a proposal to be the ambassador for the mangrove, and I was immediately attracted to the idea.

“I hope that my actions in Bali today can inspire the movement to rescue the mangroves and help improve the environment." 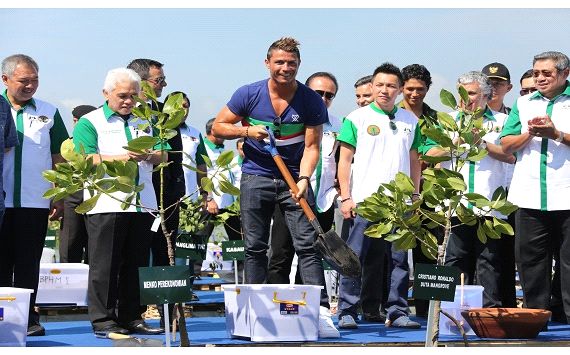 Winata revealed that Ronaldo's visti was purely for charitable purposes and that the player was not gaining any financial gain from this activity.

"Thank you Ronaldo, for your visit as ambassador to Mangrove Care Forum Bali," he said.

“Ronaldo’s role is entirely voluntary with no remuneration for his role in supporting the campaign mangrove in Bali. It is a testament to the dedication of Ronaldo to environmental causes and making the world a better place.

"Hopefully the message ‘Save the Mangroves, Save the Earth’ can reach all walks of life, young and old, rich and poor."

Sixteen years ago,Winata started a conservation initiative in Tambling Wildlife Nature Conservation (TWNC), whose scope is the conservation and rehabilitation of wildlife and rare forests, flora and fauna, marine and coral reefs. 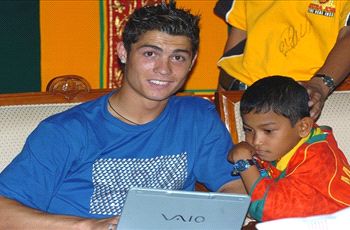 During the mangrove plantation ceremony, which aims to further internationalize the message that the Indonesian people and government place great importance to the environment, especially the preservation of mangroves, Ronaldo was also reunited with Martunis, the boy who survived the tsunami in Aceh after about 19 days adrift.

Throughout this time, the only clothing he had was a soccer jersey of Ronaldo. The reunion took place after nearly eight years since their first meeting in Aceh in 2005, where Ronaldo witnessed first-hand the devastating effects of the tsunami.

After being informed subsequently that less damage was suffered in areas where healthy mangrove forests thrived, Ronaldo readily agreed to lend his support to the Mangrove Care Forum’s efforts for conservation when he found out about it after a meeting with Winata earlier this year.