By Cesare Polenghi
In the first of Goal's five-part series on professional football in Japan, we look back on the origins of the J-League and the country's early success stories
The J-League was founded in 1991, but officially opened for business in 1993. More than 20 years have passed since then, and the Japanese football movement has grown exponentially. The road to professionalism and to success, however, was long and full of hurdles.

In fact, by 1993 Japanese football had already accumulated more than 100 years of history, allegedly dating back to 1873 when British naval officers brought the game to Yokohama.

The first tournament, that later became the Emperor’s Cup, dates back to 1921, which is also the year when the Japan Football Association (JFA) was founded. Only four teams participated in the first edition, though the number has risen in the past decade to over 6,000 which is a good indicator of the progress of football in Japan.

The latter started to bloom in the 1960s and were created with the idea of bringing employees together to practice the sport, in addition publicizing the name of the company.

The 1960s saw many changes within society and Japanese football. The pivotal figure of this period was a minute German coach, Otto Cramer, who led the Japanese national team to an amazing bronze medal at the 1968 Olympics in Mexico.

A few years before, in 1965, Cramer was pivotal in stimulating the birth of the Japanese Soccer League (JSL), the first national football league. It was populated by company clubs, which de facto hired footballers to boost their teams, and granted them a very light job, usually only in the morning, so that the athletes could practice properly and perform well in the name of the brand they represented.

In 1960, Furukawa Electric (known today as JEF United Chiba) were the first company club to win the Emperor’s Cup and in the following years their achievements were followed by Toyo Industries (now, Sanfrecce Hiroshima), Yanmar Diesel (Cerezo Osaka), Mitsubishi Heavy Industries (Urawa Reds), etc. Waseda’s success, in 1966, was the last achieved by a university.

Despite an overall growth of the football movement, success was relative as the ramshackle stadiums were mostly empty and the Japanese national team repeatedly failed to qualify for the World Cup.

Glory was brought to Japan mostly by individual players traveling overseas. Among them was Yasuhiko Okudera, winner of the Bundesliga and DFB Pokal with Koln in 1978 and known to the Germans with what today would be considered a politically incorrect nickname: “Der gelbe Blitz” (The yellow lightning).

The main architect of the final step of Japanese football was Saburo Kawabuchi, whose vision of a fully professional championship finally became a reality in 1993. The 10 founding clubs took enormous financial risks in holding the inaugural J-League Cup in the previous autumn, but were rewarded by an incredible enthusiasm that engulfed the league for the first few years of its existence and thus laying the foundations for the success of Japanese football. 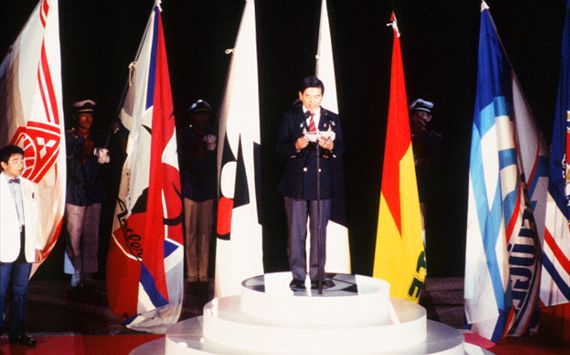 Perhaps the most poignant story is that of the Sumitomo Soccer Club, a small provincial club whose top achievement was a victory in the JSL second division in the 1986-87 season. As they timidly approached Kawabuchi in 1992 with hopes to be considered for membership, they were told that “at 99.9999 per cent it will be impossible.”

Masaru Suzuki, the Sumitomo Soccer Club’s president took the answer philosophically and replied: “That means we still have a 0.0001 per cent chance, correct?”

Sure enough they did and after they managed to build the first football-only stadium in Japan, they became known as Kashima Antlers, the most successful club in Japan to date.

However, they were not the dominating force in Japanese football back in 1993. Such a privileged spot was held by Verdy Kawasaki and Yokohama Marinos, the two teams that dueled on the legendary day in which the J-League finally kicked off.

Only 18 months after the creation of the J-League as a corporation, some 60,000 fans occupied the stands of the National Stadium in Tokyo after succeeding in a dog-eat-dog struggle to secure tickets for the official opening game.

The master of ceremony was, of course, the 57-year-old Kawabuchi. His words were few, simple, but nonetheless inspiring. He said: “Supported by the many [Japanese] who love the sport, the J-League is a dream that walks its first step toward becoming a reality.”

As the evening unfolded, the first “professional” victory went to Marinos, who overturned an initial deficit to win the game 2-1. Yet, the result was probably the least important outcome of the evening, that ended in a sort of dreamy atmosphere for all fans present and for the millions who watched the game on TV. A sense of excitement and joy lingered after the final whistle. The opening game was over, but real Japanese football had just started.
Close