The 2013 AFF Awards will be held on April 3 in Pahang, Malaysia and one of the most hotly anticipated award will be the Player of the Year award.

Teerasil won the Golden Boot award at the 2012 AFF Suzuki Cup while Shahril Ishak was crowned the tournament's Most Valuable Player.

Myanmar however were knocked out at the group stage but enjoyed a successful qualifying campaign on home turf with wonderboy Kyi Lin leading the line. The Azkals might have narrowly missed the final after losing out to Singapore in the semi-final, but Caligdong's inclusion for the award was still surprising. The midfielder was largely only used as a substitute during the campaign and was also omitted from the tournament's Best XI.

Our fan poll ran last week and it was Kyi Lin who garnered the most votes, over 50% with Caligdong claiming just over 30% of support. Shahril Ishak finished last in the polling with 0.2% less votes than Teerasil Dangda.

In all nearly 3000 votes were cast and Kyi Lin's overwhelming majority came from an influx of support from his fellow countrymen who flooded our poll in support of the young attacker. 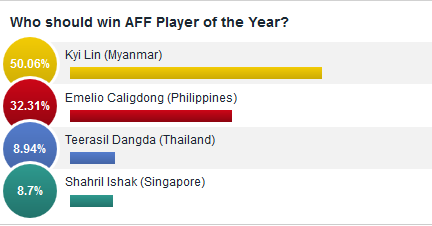