Los Blancos continue to rack up huge deficits but remain among the world's top spenders. Their unrivalled power means their losses are not a major problem just now
SPECIAL REPORT
By Kris Voakes & Ben Hayward


"For the 10th consecutive year, Real Madrid will be the highest earning sports institution in the world. And, for the third year running, Forbes considers us the most valuable club," boasted Florentino Perez in announcing the club's financial figures for 2013-14 in September.

As statements go, it was entirely accurate but in many ways incredibly meaningless. What he failed to mention was that Real Madrid posted a debt of €602 million (£477m), a €61m (£48.5m) increase on the previous year.

Perez has regularly claimed that the debt is much lower, citing only the near-€100m (£79.6m) owed to banks. But there are also huge fees against Madrid's name in debits to clubs, sporting institutions, players and public bodies.

Some supporters point to the Forbes-cited debt to value of four per cent - compared to, for example, Manchester United's 19% - as justification for the club's spending, but that doesn't take into account the entire debt, only that owed to banks.

Such figures are not placating all of Madrid's interested parties, with fans groups rightly worried.

"We are concerned that the club cannot meet commitments and future payments which must be met," admitted Carlos Mendoza – the president of Valores del Madridismo, which is made up of club members aiming to preserve the values of Real Madrid.

More pressing still is the short-term debt. Of the €602m in the debit column, €361m (£287.2m) is owed in the next 12 months. In layman's terms, that's Gareth Bale, Cristiano Ronaldo, James Rodriguez, Karim Benzema and Toni Kroos' transfer fees added together.

In reality, it will not take the sale of their five star players to meet the demands of creditors. But the club certainly cannot continue to overspend as they have in recent times. The arrival of Bale from Tottenham played a significant part in the €61m debt growth in 2013-14, while the additions of James and Kroos this summer suggest Perez and the remainder of the board have no issue at all with the club's rising costs.

Madrid currently have working capital of minus €94m (£74.8m) - that is to say the club is owed €267m (£212.4m) but has to produce €361m (£287.2m) from somewhere to pay its immediate debts. That figure will be offset by the sales of Xabi Alonso and Angel Di Maria since the transfer fees paid for James and Kroos will be gradually written off over the course of their contracts, meaning the short-term debt has provided some leeway. 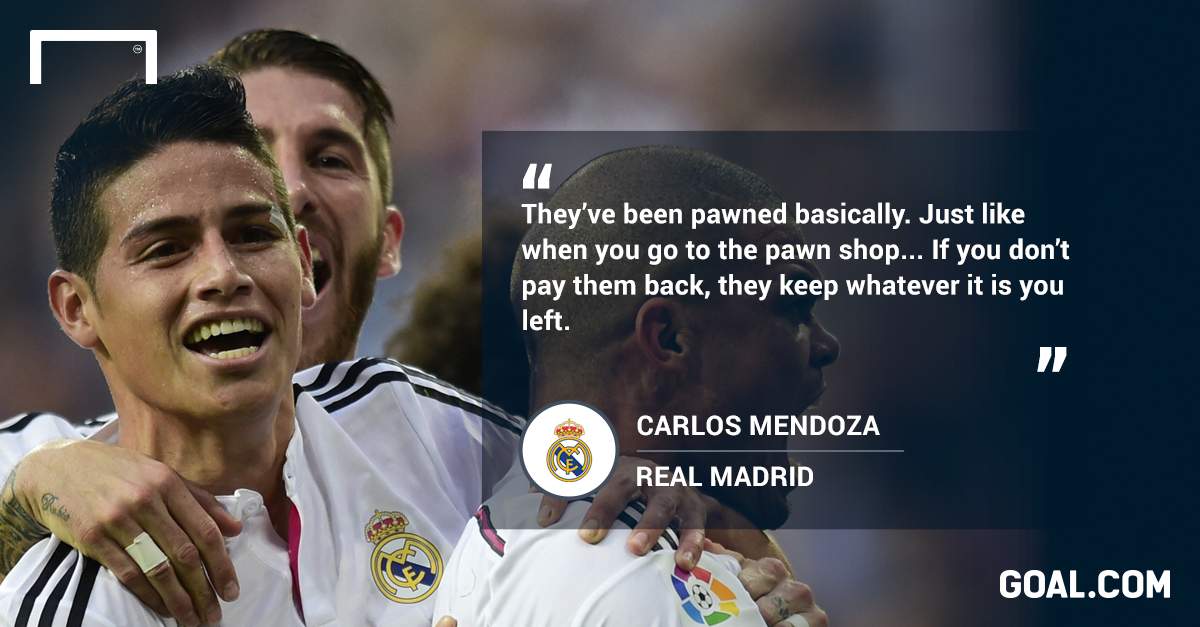 But that does nothing to address the problem over the longer-term, and transfer fees for the likes of Bale, Kroos, James, Isco and Illarramendi are still to be paid. All the while, future earnings are already being traded off.

"The club have two new credit lines, but they've had to use the advertising income and the season ticket sales for the next three or four years as guarantees to the banks, because they don't trust the club... That's not me saying that, it's from the club's annual accounts," Mendoza added to AS.

"They've been pawned basically. Just like when you go to the pawn shop, they give you money and you leave a guarantee, something real. If you don't pay them back, they keep whatever it is you left. Here, if Madrid don't pay back the money, the bank has the right to the money from the advertising income and the season ticket sales.

"Obviously the banks are asking for an extra guarantee from Madrid because they don't trust the club's situation. Under normal circumstances they wouldn't demand it."

The huge debt has been racked up in part due to the club's unparalleled position within sports. Almost nobody else would have been granted a free rein in the market while such large figures remained outstanding. But Real Madrid are Real Madrid, the biggest club in the world with the greatest pulling power, the most incredible strength of brand and countless key contacts across industries outside of football which can help to arrest the tide.

Yet if debt levels continue to rise and the club's future earnings are consistently traded off as capital to allow them to spend beyond their means, the Blancos could be forced to become a PLC rather than a socio-owned club.

Madrid, Barcelona, Athletic Bilbao and Osasuna are exempted thus far from being forced to become a PLC under Spanish sporting laws, but under the assumed condition that each club is run in a suitable financial manner.

For now they are okay, with the LFP announcing last year: "The club has the capacity to deal with the debt and the figures show that Madrid is economically solvent, within the economic controls established."

This largely spans from the club having racked up debts placed against the value of the club. The depth of valuable players in their squad, the value of the Santiago Bernabeu – situated on prime real estate near the centre of the Spanish capital – and the number of big-money sponsorship deals all grouped together to make the club worth €2.7 billion (£2.15bn) according to Forbes.

But leading Spanish economist Jose Maria Gay de Liebana is worried that the dam will break at some point, leaving the club with difficult questions to answer. And he has told Goal that money has been spent in the wrong places.

"From their youth system there is hardly anyone; almost all of their players are bought from other markets and they are expensive players. That means that, even though they have their own resources, they are putting themselves into debt. The debt is a consequence of so much investment and, in particular, high investment."

It is a practice which cancels out many of the positives of being the world's most valuable sporting entity, as Gay explains.

"One thing is the valuation you are given, from specific operations or because of the Santiago Bernabeu or whatever else, but you have a balance sheet with your incomings and outgoings, and you have to generate sufficient money to be able to pay your debt.

"Look at it from a personal point of view: no matter how much I am deemed to be worth, I have to face up to my debts and use the money I am generating to address that. That's why a club or company with more moderate debt is in a better situation. Any company would want a more moderate or manageable debt in order to avoid complications.

"I'm not saying that Real Madrid have such complications at the moment, but look at Manchester United for example, who are not in the Champions League this year. For one season, that's not a problem, but two years in a row and they can become vulnerable."

Uefa's introduction of Financial Fair Play laws controlling a club's football-related spending against its income does nothing to address the debts already racked up before the practice was introduced in 2011. Nor does it stop clubs from adding to their issues by making seemingly unnecessary expansions to their stadiums, as Madrid are set to do at the Bernabeu.

While the club posted record revenues worth €518.9m (£413m) in 2012-13, as per Deloitte's 2014 Football Money League, they also paid out more than any other club. And Gay questions the foresight of clubs who believe that football will continue to generate such huge levels of income come what may.

"I have one big doubt: can football grow much more?" he said.

"Real Madrid have an income of more than €500m, Barcelona thereabouts as well and Bayern Munich not far back… I ask myself: is there enough cake for teams to earn even more? Will we see Barca or Madrid, for example, with incomes of €1bn? Right now, I can't see it.

"There is an international share, including television and sponsors, etc… but I can't see that the Spanish league, the Champions League or European competition as a whole, are so strong that clubs can double their income. There is tension when it comes to incomes and I believe it's hard to see that growing much more than it already has. I have my doubts."

Their current debt levels dictate that Real Madrid - who failed to respond to Goal's request for comment on the matter - must hope that the football bubble does not burst any time soon. For as long as the game continues to grow as a financial behemoth, they will remain untouched with their huge debt growing year-on-year.

Perez will remain in a position of strength so long as football maintains its place as the world's favourite pastime. With his contacts, his business know-how and his record for keeping the creditors quiet, he has exactly the kind of track record the club needs in its operating head.

The biggest debt in football continues to grow. But so does the club to which it is attributed.