Goal takes a look at the best players to select or avoid, the bargain buys and the top choice for captain's double points ahead of the Premier League action on New Year's Day

Since his return from injury, the form of Theo Walcott (9) has been difficult to ignore and the Arsenal winger has scored 32 points in his last four gameweeks. On Wednesday, Arsene Wenger’s side host Cardiff City, who have won just once on the road all season. We’re backing the England international to be among the points again against a side who could be in the start of a sharp decline following Malky Mackay’s sit earlier in December.

Eden Hazard (9.5) has been in scintillating form for Chelsea and the Belgium took his points tally to 39 in his last six gameweeks after scoring against Liverpool on Sunday.  On New Year’s Day, the Belgium international is likely to remain in Jose Mourinho’s starting line-up for the trip to Southampton and, therefore, in with a chance of a goal or an assist.

Seamus Coleman (4.5) just keeps on scoring and his place in your side should not be too hard to justify. For such a cheap price, the Everton full-back has already registered 95 points, 20 more than the next best defender who is Per Mertesacker (5). Coleman is up against an out-of-form Stoke City side on Wednesday and we won’t be surprised if the defender registers another high-scoring gameweek.

With David Silva (9) suspended for the trip to Swansea City, Samir Nasri (7.5) could be Manuel Pellegrini’s central link between midfield and attack. The Frenchman was rested for the win against Crystal Palace on Saturday, only coming on as a second-half substitute, and is therefore very likely to start at the Liberty Stadium on Wednesday.


Mamadou Sakho (5.5) picked up a hamstring injury in Liverpool’s 2-1 defeat to Chelsea at Stamford Bridge on Sunday and has been ruled out for Wednesday’s home fixture against Hull City by Brendan Rodgers.

David Silva (9) picked up his fifth yellow card of the season on Saturday and, as a result, will miss Manchester City’s trip to Swansea City.

Jesus Navas (8) has played the full 90 minutes in Manchester City’s last two matches that have come within the space of three days and could subsequently be rested against Swansea City by Manuel Pellegrini.

Mesut Ozil (10) missed Arsenal’s win over Newcastle United on Sunday and has been ruled out for up to three games by Arsene Wenger.

The festive period has also taken its toll on Chelsea’s Branislav Ivanovic (6.5) and Frank Lampard (7.5) as the pair picked up injuries in the win over Liverpool on Sunday and are now out of the clash against Southampton this gameweek.


Loic Remy (7.5) failed to register a shot in Newcastle United's defeat to Arsenal on Sunday but he may get more chances on Wednesday as Alan Pardew's men face West Brom. The Baggies, who are still under the guidance of Keith Downing following Steve Clarke's exit earlier in December, conceded three against a disjointed West Ham side in their last outing, which could mean Remy may be back among the goals.

In the last six gameweeks, Raheem Sterling (5) has scooped 33 points, which is in similar territory to the big-hitters such as Theo Walcott and Eden Hazard. The 19-year-old was unable to unlock Chelsea’s defence on Sunday but he may have more joy against Hull City at Anfield. Although this recommendation should come with a word of warning - Sterling has played 90 minutes in Liverpool’s last four matches which have come in the space 14 days and he could therefore be rested by Brendan Rodgers.

The injury to Kieren Westwood (4) has allowed Vito Mannone (4) to become Sunderland's first-choice goalkeeper for now and the Italian has impressed Gus Poyet with a string of fine performances, particularly in the 1-0 win against Everton on Boxing Day. This gameweek, Mannone is up against Aston Villa who have struggled for goals and we're backing Sunderland to keep a clean sheet against Paul Lambert's men.


Luis Suarez (10) has had two difficult weeks against Manchester City and Chelsea but we're confident the Uruguayan can get back among the goals at home to Hull City on Wednesday.

Perhaps unsurprisingly given Suarez's form, these two matches have been the longest the forward has gone without finding the net this season but with Steve Bruce's side possessing the joint-worst away record in the Premier League, it should provide the perfect platform for the striker to go on and register a high score. 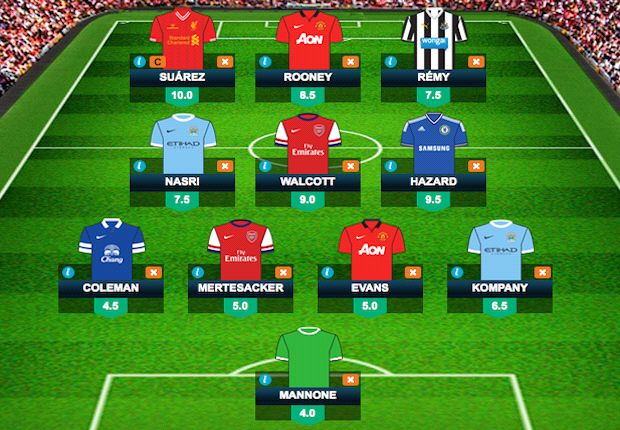 Sign up to Goal's Premier League Fantasy Football competition for the chance to win monthly prizes. It is simple and fast to register and pick your team, so you can start competing against friends or colleagues for the ultimate bragging rights!
Close