Saudi Arabian Football Federation (SAFF) are on a mission to broaden the horizons of the game in the country. With focus on grassroot development, Saudi FA have already started working towards establishing themselves as one of the strongest teams in the continent.

But the FA, under the leadership of President Yasser Al Misehal and General Secretary Ibrahim Alkassim, are looking to take the game forward in the country. And one of the major areas of focus for them is women's football.

Interestingly, the country allowed women to attend football matches in 2017 and two years from that landmark decision, the Saudi FA organised an unofficial women's football tournament. In February 2020, the FA launched the Saudi Women's Football League officially, with teams from Riyadh, Dammam and Jeddah.

In 2021, the women's national team was launched and they played their first match in February 2022.

"In January 2022, I had a very emotional moment when I was at the final of the Women’s National League. I was at the trophy ceremony. I can’t describe the moment, the passion and the love the people who attended the match showed to the girls. The demand of women’s football in Saudi is very high. This year we will have the league in two divisions. We will have the top tier and then we will also have the first division for the first time," Alkassim told GOAL. 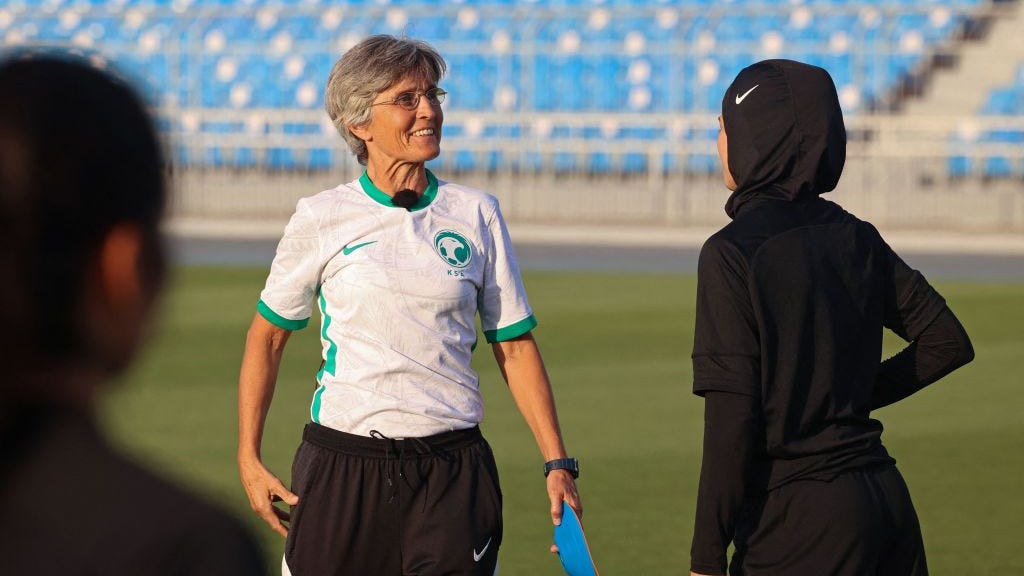 "In 2019, we started the women’s football department. So rightaway we hired a German coach Monika Staab and she said ‘okay but let’s do try outs’. So we did try outs and about 800 girls came. We had just started and I did not realise the love for the game, the passion to play football they had. And suddenly when I put myself in these girls’ shoes, I realised that one day they were dreaming of playing football wearing the national team jersey."

Alkassim went on to explain why Saudi Arabia decided to bid to host the 2026 Women's Asian Cup. He felt that the country had a lot of potential and demand for women's football. He felt that more women's games the country hosts, the more girls would be interested in playing the sport.

"The demand for women’s football is very high and the support for women’s football development is also very high and that’s why you see us bidding for Asian Cup 2026. We are preparing our national team to play in Asian Cup 2026. We want to invite the world to see how our girls play football. We want them to see the love for the game in Saudi Arabia. We are developing women’s football not for any other reason but to give these girls a chance to grow in football, play football and do what they love. We believe that the more our national team plays matches, the more we win, the more match participation and the more viewership we expect. So we expect more engagement from the public."

Along with the development of the women's national team, Alkassim also explained that the FA are also laying the groundwork for establishing a talent pipeline through the women's football league. 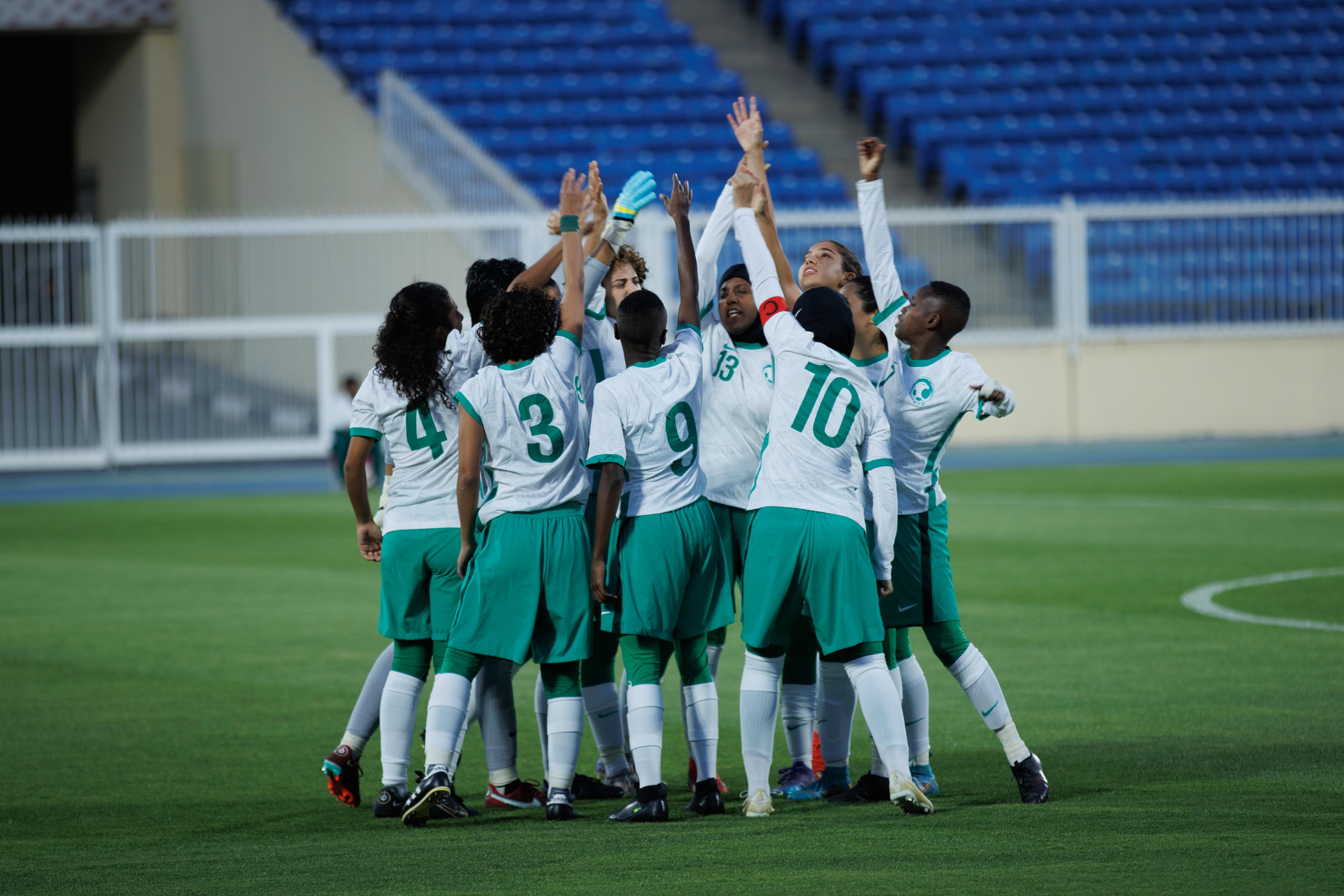 "Our target last year was to start the women's senior league. This year we'll have two leagues and also in the years to come, we will have more tiers and more leagues for the age group girls as well. We already started the same regional centres that we did for the boys. When we negotiate over the sponsors for the federation or the national team, it’s the same for boys and girls. When the boys national team win in any age group and when the girls national team win, it’s the same money they get. We are providing the boys and girls with equal opportunities and equal support," he stated.

Along with the focus on women's football, Saudi Arabian FA are also focused on overall development of the football ecosystem. Alkassim stated that Saudi Arabia are looking to establish the country as a major footballing hub. Saudi have already bid for the 2027 Asian Cup and Alkassim feels the Saudi FA have the required expertise to pull off the event.

"If we win the hosting rights, we have a plan to start rightaway with the help of AFC and to work with all the Member Associations to be part of organising this competition. For example, in Saudi Arabia we had hosted so many events. We are gaining lots of knowledge and expertise. When we host any competition, all the operation is done by SAFF (Saudi Arabian Football Federation) employees. Even the team liaison officer is a SAFF employee. We build a team for all these competitions. Any football competition that we host, I ask them to handle. They have gained so much experience over the years we want this experience to be passed on to other AFC nations," he said regarding to the legacy Saudi Arabia would leave in terms of hosting the 2027 Asian Cup. 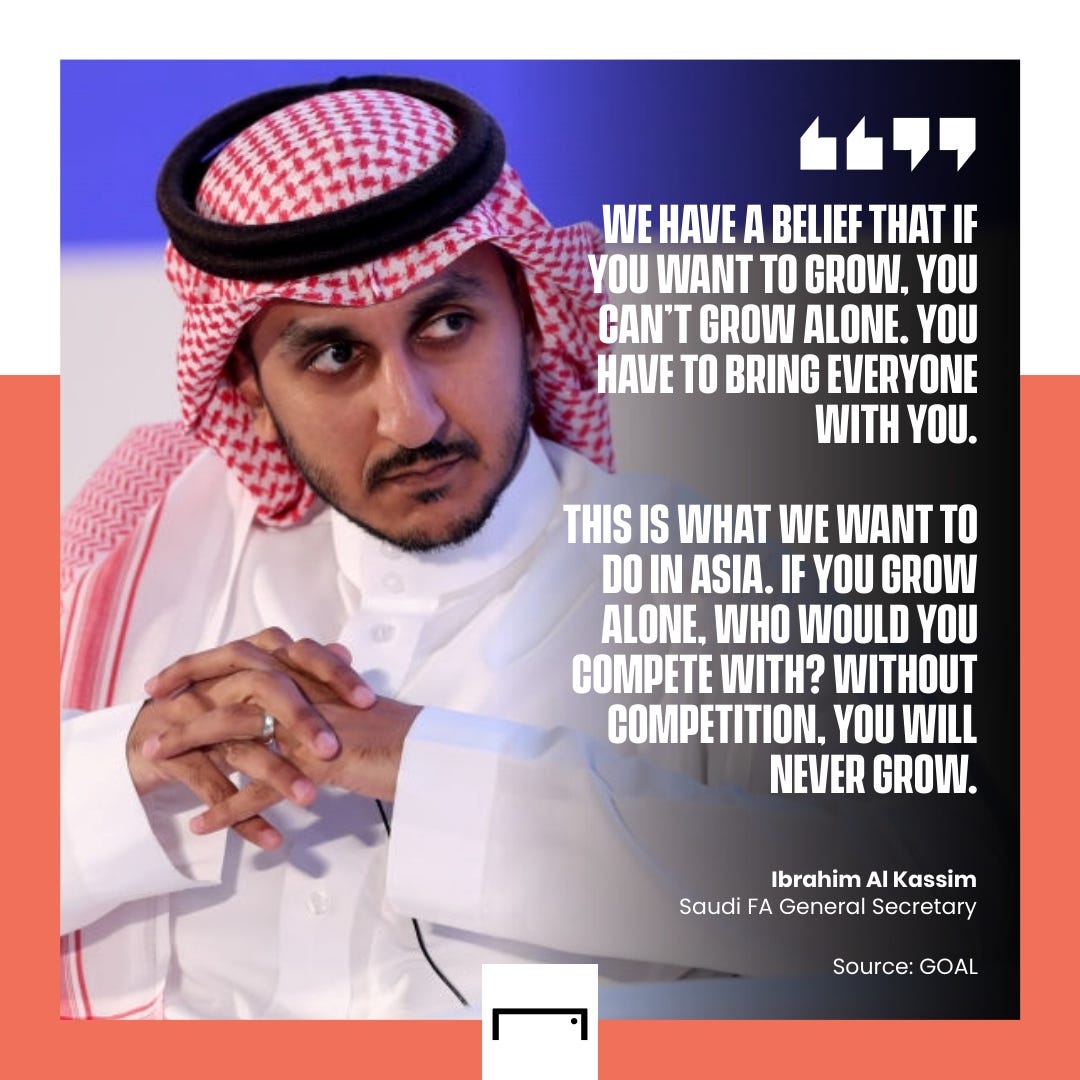 Adding to that, a Saudi FA delegation has been visiting countries in Europe to learn and adapt various processes to help progress the overall ecosytem of football in the country. Along with that, Saudi FA also wants to ensure what they learn is passed on to other countries in Asia and help them develop too.

"This is what we want to do in Asia. Because if you grow alone, who would you compete with? Without competition, you will never grow."