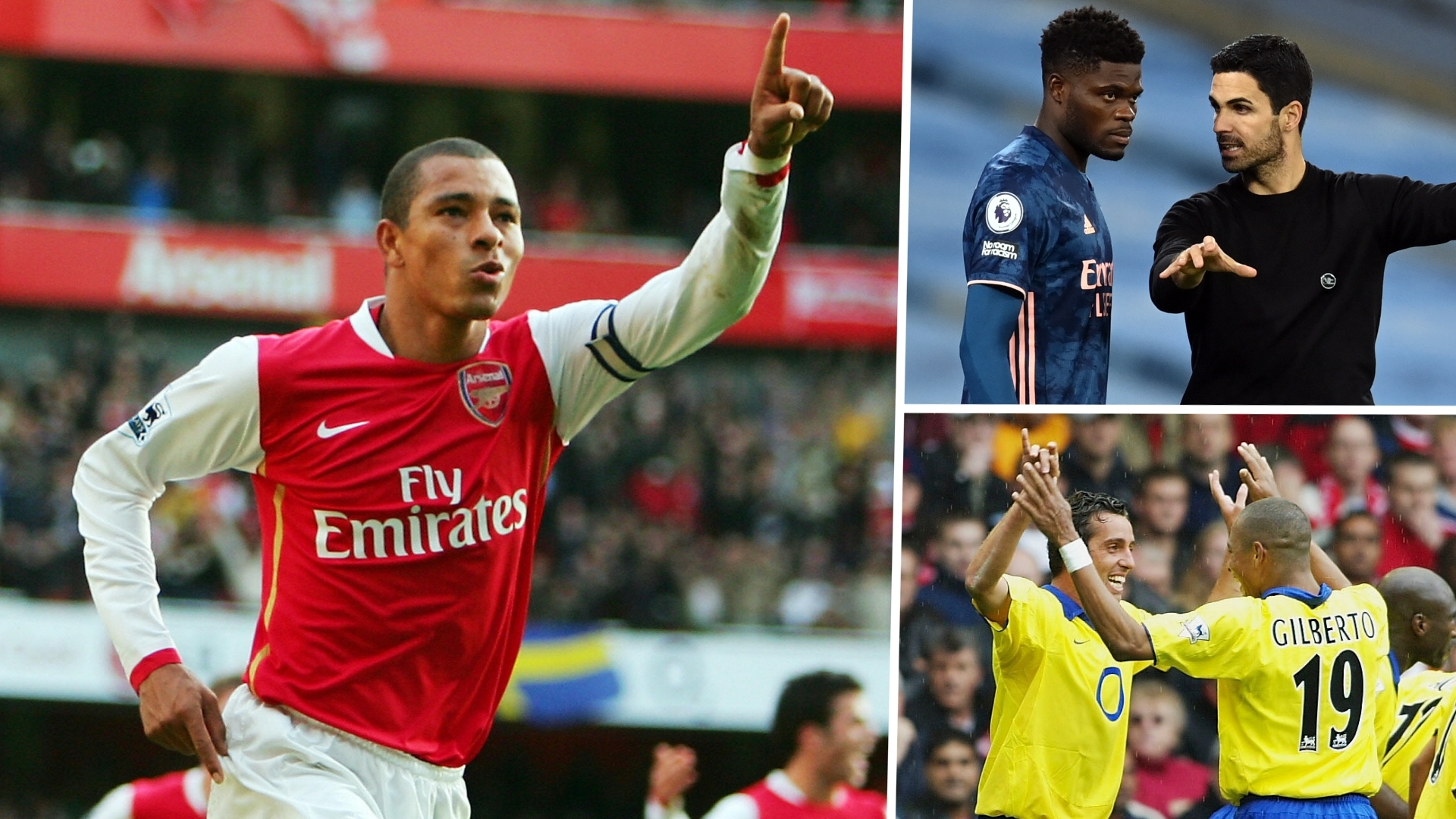 It was April 2004 and Arsenal had just won the Premier League title at the home of their arch-rivals Spurs.

You would think the away dressing room at White Hart Lane would be a place full of joy and celebration... but you would be wrong.

For Jens Lehmann the frustration of conceding a last-minute equaliser was proving too much to take, especially as the goal had come from the penalty spot after he had been judged to have committed a foul.

“Jens went into the changing room very angry with the goal we conceded,” Arsenal legend Gilberto Silva tells Goal during an exclusive interview.

“He was in the dressing room shouting and suddenly Arsene [Wenger] told him: ‘Jens, calm down, we are champions’.”

It was a moment which summed up perfectly what it means for Arsenal to beat Spurs.

Even then, having been crowned Premier League champions, Lehmann’s immediate reaction was one of immense frustration at having seen a victory snatched away in the final few seconds at White Hart Lane.

Perhaps it is also a telling insight into the mentality of Arsenal’s legendary 2003-04 Invincibles side, but it still paints a picture of what the north London derby is all about.

“It is a very special game for every player who has an opportunity to play in it,” Gilberto said. “You know how important it is for the fans, for the club, when you play this type of game.

“You have to enjoy the opportunity, but on the field you have to give everything. This is what the game demands of you.

“Power, strong mentality and strength. Everything you can provide for this game you have to be ready for it.

“It’s the north London derby, who wants to be out of it? They must be crazy.”

Gilberto arrived at Arsenal in the summer of 2002 just a month after lifting the World Cup with Brazil in Japan.

When he first walked through the doors at London Colney his English was limited and it took him some time to settle into his new surroundings.

But one thing he was made to understand almost straight away was just how important it was to beat Spurs when the north London derby rolled around.

“Pat [Rice] was one type of person who would always speak to the players about the importance of this particular game,” said the former midfielder, who made 170 league appearances during his six-year spell with Arsenal.

“It wasn’t only Pat. Martin Keown, Sol Campbell and Ray Parlour used to speak about this game. To have these English guys in the dressing room was very important for me and the foreign players to understand what it means for them and also for the club.

“We had to understand, to get into that mentality. Otherwise you go there, they smash you and kick you out. Then you are off the game.

“This is more than a physical game and more than a tactical game. It's a mental game when you go into these derbies.”

Gilberto is currently back in Brazil, having returned to his homeland from London during the pandemic.

But he, like every other Arsenal fan around the world, will be watching on Sunday when Arsenal host Spurs at the Emirates Stadium.

It’s a game that comes at a crucial time for Mikel Arteta’s side.

Just two weeks ago they were bottom of the Premier League having lost their opening three games. Spurs meanwhile were top after starting the season with three successive wins.

Things have changed dramatically in the last fortnight, however, and a win for Arsenal on Sunday by two goals or more will see them move above Tottenham in the table and make it four successive wins in all competitions.

“This is a very important game for the club, for the players and for the fans,” Gilberto explained.

“It’s important for the players and for Arteta to keep the momentum.

“To win the derby is always important for the confidence of the players. It’s tough to have a start like Arsenal have had this season. But they are recovering step by step.

“And this is the kind of game that can give you a boost to go further. Everyone has to be motivated to deliver their best and to give everything to win the game.

“Let’s see. I’m positive they can keep the good momentum.”

Arsenal’s current plight is far cry from the glory days they enjoyed when Gilberto and Patrick Vieria were the heartbeat of Wenger’s legendary team 17 years ago.

The days of challenging for the title every season are long gone, with two successive eighth-placed finishes in the Premier League a stark reminder of just how far they have fallen.

They go into the weekend sitting 13th, with those three opening defeats leaving them playing catch up with the rest of the so-called big six.

But they have at least steadied the ship with three successive wins in all competitions and the return to fitness of Thomas Partey in recent weeks has come as a major boost to Arteta.

Arsenal have lacked a dominant central midfielder since the days of Vieira and Gilberto and the Brazilian believes Partey has the quality to make a significant impact in north London.

But he has warned that the Ghana international can’t be expected to do everything by himself.

“Everyone knows how important he can be for the team,” said the 44-year-old.

“Having this calibre of player is always good for the players because they trust him, especially in that position where many things are decided.

“I hope that he is going to be 100 per cent fit to play 90/95 minutes and help the team. This is what we expect from big players. In this kind of game, they increase their level of quality to push others.

“He is somebody who makes a difference on the field. This is what we expect from a player like Partey.”

When asked whether Partey is the closest Arsenal have come to having a midfielder of the quality of himself or Vieira, Gilberto added: “Obviously he has quality but it’s hard when you compare someone.

“He has his type of game and me and Patrick had the way we played. The partnership between us worked fantastically and for you to play well, sometimes you need somebody on your side on the same level to raise your game.

“At that time it was not only me and Patrick. We had players around us who gave us the support to increase the level of our games. This is the difference.

“Partey is an important player, he has the possibility to grow even more. But it’s important that the other players come with him, improve their level, the way they play and build up this strong, winning mentality.”

There has been a lot of criticism levelled at Arsenal in recent months for the way the club is being run.

Many believe Arteta is not up to the job, while Gilberto’s former team-mater Edu - who is now Arsenal’s technical director - has also been singled out for his handling of the club’s transfer strategy.

No club spent more than Arsenal’s total of £145 million ($198m) during the summer transfer window, but the quality of the six new arrivals have been called into question.

Both Arteta and Edu have come out fighting, however, and continue to point to the long-term project that is underway at Arsenal. It's a project they believe will soon have the club back competing among the best.

Arsenal fans has consistently been told to ‘trust the process’. But does Gilberto trust it?

“Only time will tell us,” he said. “Mikel is young, but he is brave and confident in what he says and that confidence is very important.

“He is the main leader of the team, of the squad. It starts from him. If he doesn’t trust what he thinks, he does not give the confidence to the players.

“I’m sure the way he speaks, the way he delivers his message, is because he knows what he’s doing because he trusts what he thinks.

“And I’m glad that Edu came back to the game and I hope he is successful at Arsenal, as he was in Brazil with Corinthians and the national team.

“It’s a massive job and because he played for the club it becomes even harder because sometimes people look back at what he did as a player and expect the same success in this position. I hope that will come.”

And what about Arsenal's transfer strategy?

“I think the hardest thing nowadays is to find the right balance to reinforce your squad," Gilberto said.

“You can bring in the best player in the world and spend a lot of money, but what about the other positions? Not only for the moment, but for the future.

“If you look back at our time with Arsene, he always recruited younger players because at that time he had a squad that gave him this opportunity because he had a foundation.

“What I see now is they are recruiting players for the future as well. Not only for the moment. They need results of course, but they are thinking medium to long term.

“Of course it is important to worry about what we need to do now to keep going and to get the best results, but there are no guarantees.

“Even if they change their policy and bring in two or three top players. What guarantee is there of results? You never know.”